A Visit to DC

We had a business appointment in Baltimore so we decided to spend a couple of days in Washington, DC beforehand.

There are not very many places to stay in an RV around Washington DC and they are usually expensive. We found a nice campground with water and electric for a reasonable rate and made reservations. After describing what our rig looked like, the person on the phone said we would have no trouble getting onto the wooded sites. We were able to get in, but we did need to walk the route before attempting to enter. The roads were narrow and the turns were tight but the site they gave us was long. It had plenty of room for all three vehicles and was very dark and quiet at night. 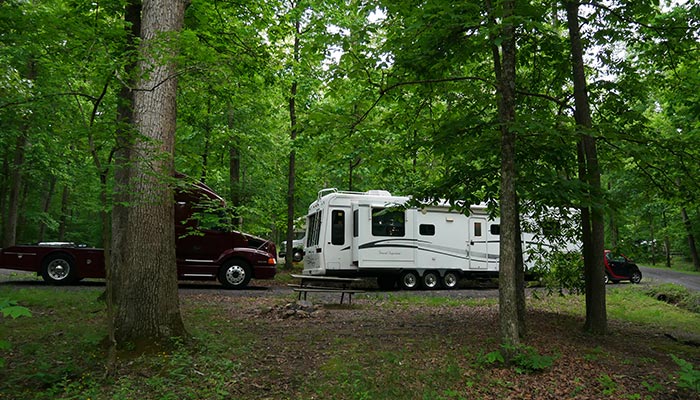 There was only one afternoon with no threat of rain during our trip so we chose that one to tour Skyline Drive through Shenandoah National Park. This drive is similar to the Blue Ridge Parkway and if you look on a map, one picks up where the other ends. There were many places to park and hike along the drive, but we didn't have time for hiking that day.There were also numerous flowering shrubs and many wildflowers along the way. The drive was mostly wooded with a few vistas showing the valleys on either side of the ridge. 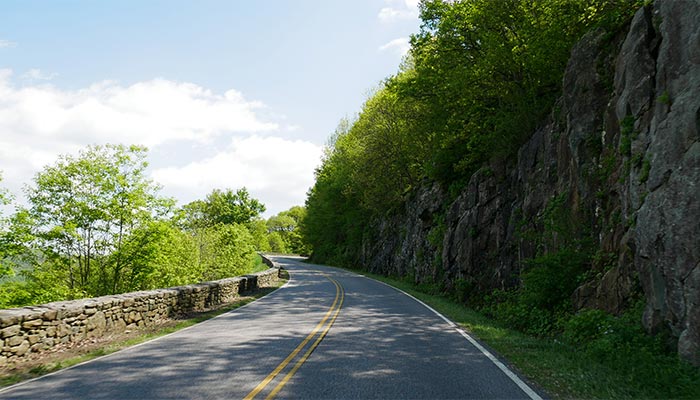 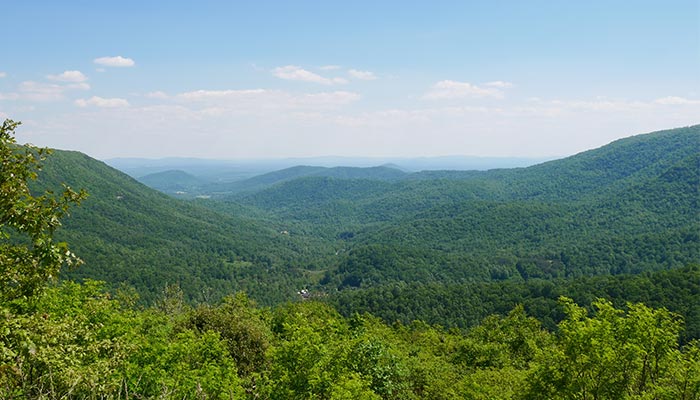 The next day we drove into Washington DC to the nearest subway station, which is our mode of transportation when visiting the big cities. We were able to get day passes which allowed us to take any bus or subway in the system until close of day. While it wasn't cheap, it was much less expensive than purchasing individual passes for each ride and it also gave us the freedom to explore wherever we wanted. You had to swipe your pass to enter and exit the station. For most folks who do not use the daily pass fairs can be purchased before entering and before exiting the turnstyles. 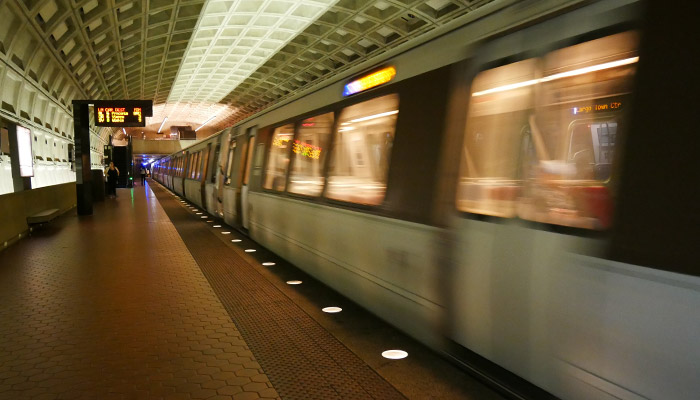 The subway systems were clean and bright. We had no issues riding day or night.

We took most of one day to explore the Museum of the Bible. 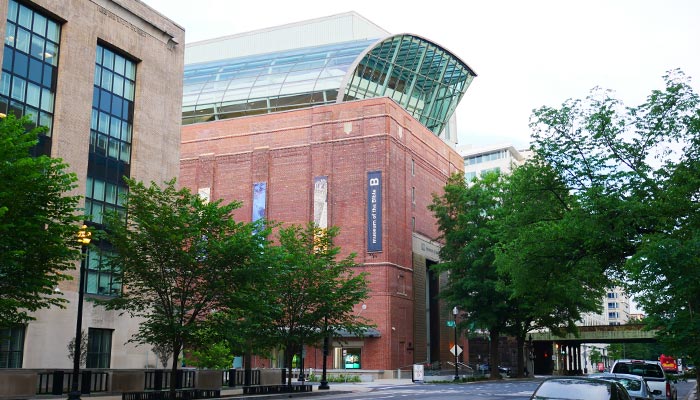 It first opened in the Fall of 2017 so it is pretty new as far as museums go. It has many floors with a variety of exhibits on each to keep one occupied for a day or more. We took the stairs on the way up, but chose the elevator for our decent.  The elevator was surrounded by moving wall screens showing various biblical landscapes. 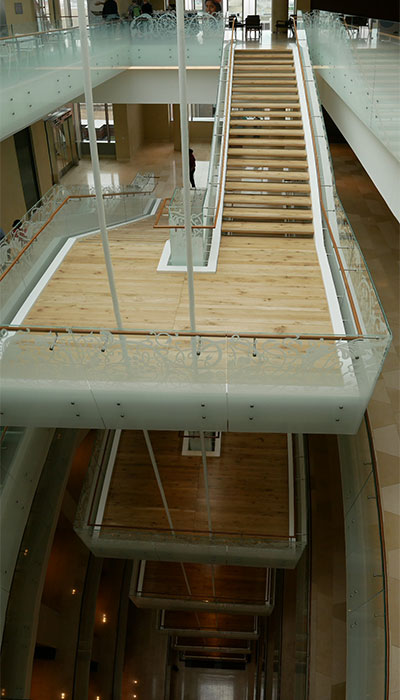 We found the museum to have great visuals with many short videos and interactive displays, which aided the accumulation of knowledge as we explored. There were many areas where photos were not allowed, so we didn't bother taking pictures. However, the museum has a great website where you can explore different areas and learn more.

We planned one more trip into town on what was supposed to be a cloudy day, not so hot day. We wanted to walk the mall and visit the smaller monuments we had missed on previous visits. The temps reached the low 90's before noon so we found an air-conditioned museum to wait out the rest of the day.

We had visited the National Museum of American History before, but it was close and cool so we slipped inside with thousands of our fellow citizens to see what was new. This is a good museum, but many of the exhibits were text intensive in very dark rooms, which makes reading a bit difficult. The fact that the museum was very crowded also increased the challenge.

When we went to a lower level, we discovered Military Invention Day displays. Now that was cool! The military has invented so many things that eventually made their way into civilian life (drones, GPS, medical breakthroughs, bendable glass, and many more) and it was neat to talk to some of the folks involved in the hard work of imagining and creating such cool things. These ranged from simple solutions for common problems to forward thinking ways to provide for the safety of our citizens. Both military and civilian personnel work in labs across the country and come here once a year to display their work to the public.

During Science Fair each year we have over a dozen military personnel awarding prizes to our young scientists. We never really understood the extent of invention in our military until we saw these displays. We talked to dozens of presenters about their displays and learned much about them and their desire to make life better for all.

One display featured a simple door lock system that would work with any strike plate. The process worked well with inward opening doors, and they were developing a system to lock doors that swing out also. An immediate application could be for schools when lock-down is needed but a variety of uses will be realized in the future. 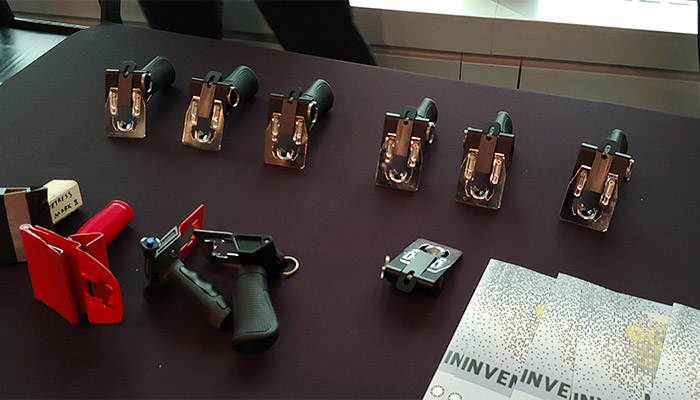 A flight crew member noticed that it took five strong people to change the tires on a C5 aircraft and one of them had the dangerous job of using his body as a brace. They developed a braced that enabled the tires to be changed by only two people without personal danger encountered by the previous method. The prototypes are seen here. 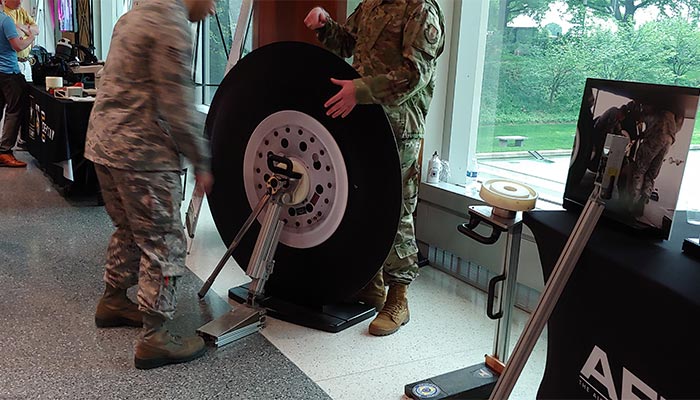 We spoke to a guy who was part of a test team utilizing tires that converted round wheels to a triangular track system (when going from smooth to rough terrain). The vehicle could switch from a circular rotating wheel to a fixed triangular track/tread at 60 mph. It was pretty cool to watch. Unfortunately, that program has not found a current application. While not all inventions go into production, they can be a basis for further experimentation. 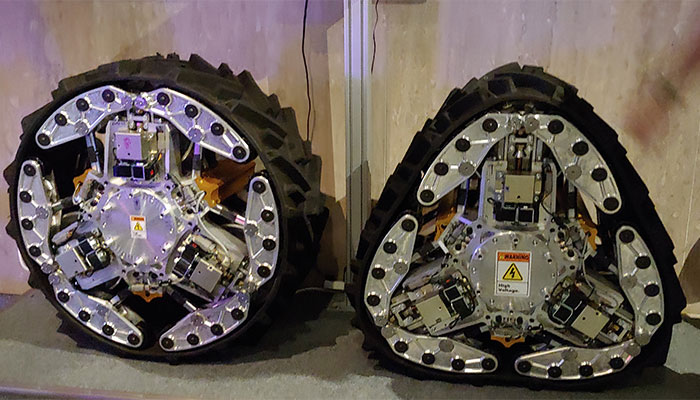 We spoke with others, too numerous to mention here. Although much of the technology was complicated, they made it simple to understand. To the best of my knowledge, this event only happens once a year, and only in DC. It would be cool if folks across the US could see what the Department of Defense and others are doing to improve life for modern man.

Once it cooled down outside, we grabbed dinner and continued our tour of the mall. 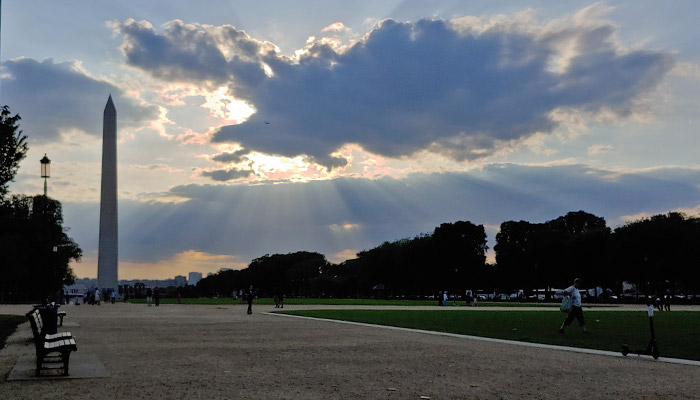 We had not previously seen the Korean War Memorial and were impressed with its thoughtful design. At the far end was a pool and wall with the inscription "Freedom is not Free". Sitting on a bench in the cool, quiet shade watching veterans passing by to see the memorial gave us time to reflect on that fact which is so easily forgotten in our comfortable lives. We take so much for granted. 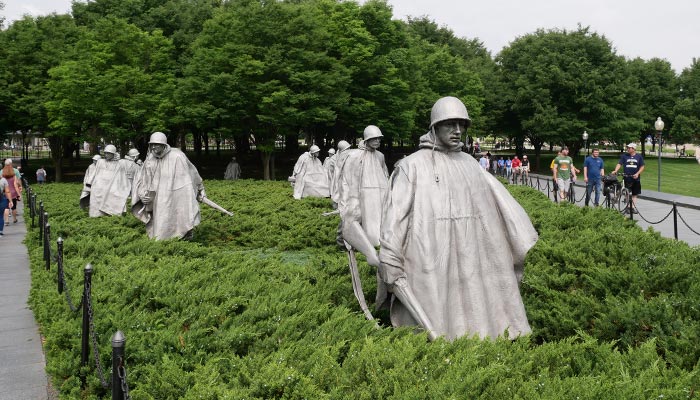 We took a short detour off the Mall to see the Jefferson Memorial and the Martin Luther King, Jr. Memorial. It was crowded and noisy at the MLK memorial but we took a little time to walk around and read the inscriptions. It was interesting to consider that one of his most famous speeches was delivered just a few hundred yards away at the Lincoln Memorial. What would it have been like to be there that day? 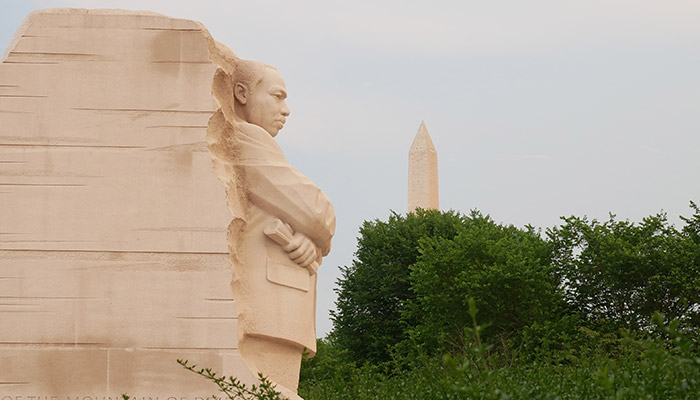 As the sun set and the heat subsided, we began to explore the Mall at night. There were people everywhere and it was easy to understand why on such a beautiful night. We enjoyed the cool night air and the glow of the monuments along the mall. We sat at the Lincoln Memorial for a while.

The Capitol you can see in the distance is about two miles away. 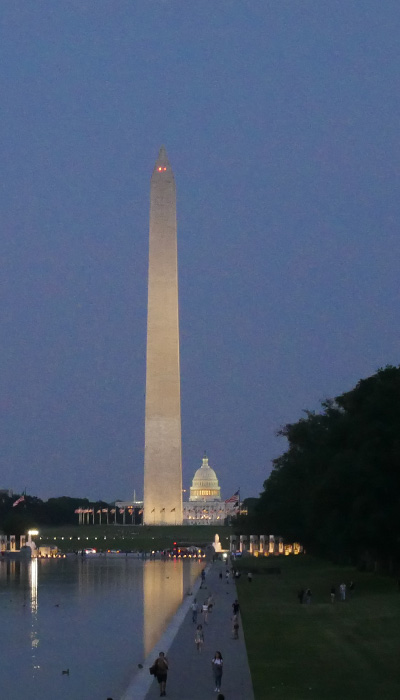 This one was shot from the WW II Memorial past the Washington Monument to the Capitol in the distance. 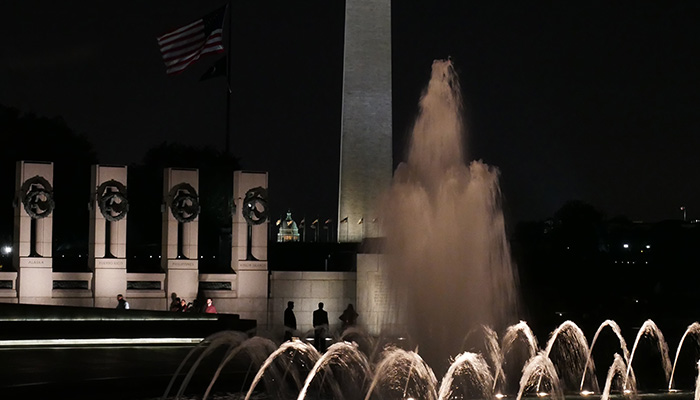 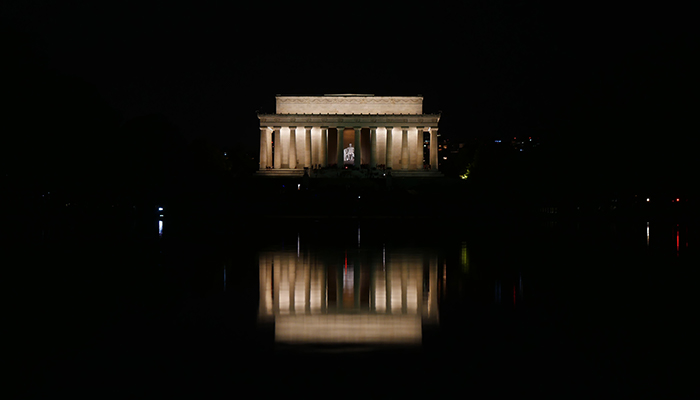 This was the corner of the Vietnam Memorial. It was so dark that there wasn't enough light to get a wider angle. It was, however, beautifully lit in person. 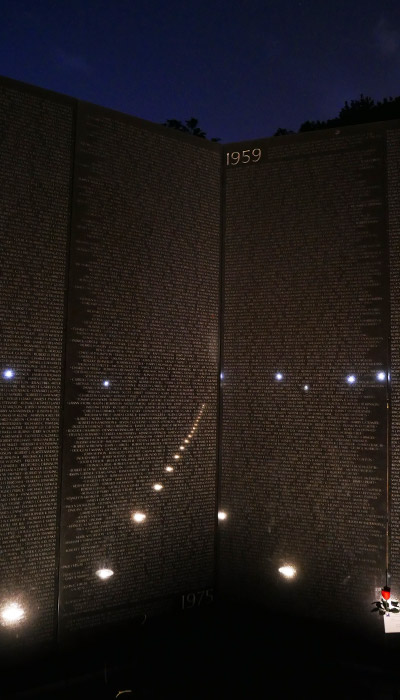 It was a great visit to DC but it made us a bit sad that so many folks today are focused on the problems we've dealt with (and some we are are still dealing with) as Americans and not our common ground. This is an incredible nation and we're confident there is no better place to live no matter who you are. We should keep all our history, both the good and the bad, in our memory to be thankful for what has been purchased with the blood of many lives, so that we do not repeat the mistakes of the past, nor disregard the wisdom of our forefathers. 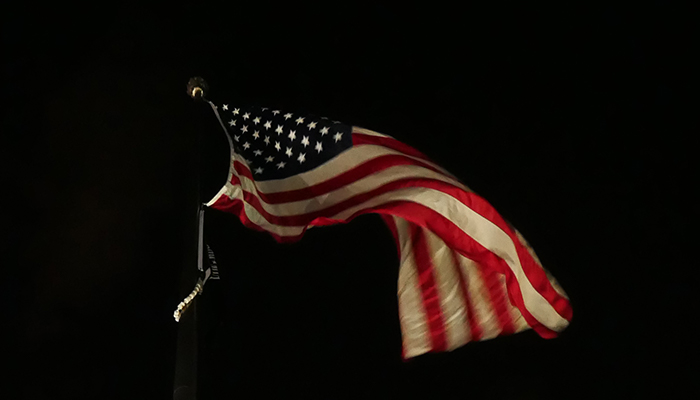