The last two weeks have been spent in Crossville, TN at the East Coast Rally for Heavy Duty Trucks. The highlight of our week was seeing old friends and meeting new ones, but there was much more going on. Except for a few days when winter tried an encore, spring was in full swing here. Trees are budding, birds are singing (sometimes way too early in the morning) and the animals are out looking for food.

We had been talking to other HDTers before our arrival and they had a Smart Car for sale. Trey has been considering a Smart Car option since last November. A Smart can fit on the back of our truck (with a little reconfiguration) and it will make a convenient option besides the truck or scooter. We figured we would get a Smart at some point in the future. However, Smarts are going all electric and we wanted to have a gas option before the good ones were gone. We test drove a few but never bit at an offer. When we heard our friends were selling theirs, we took a good long look. It was a 2015 model - one year older than what we planned to get - but the owners took meticulous care and it was a convertible. The price was more than reasonable so we called them and made plans to complete the purchase at the rally. This is what how our driveway currently looks: 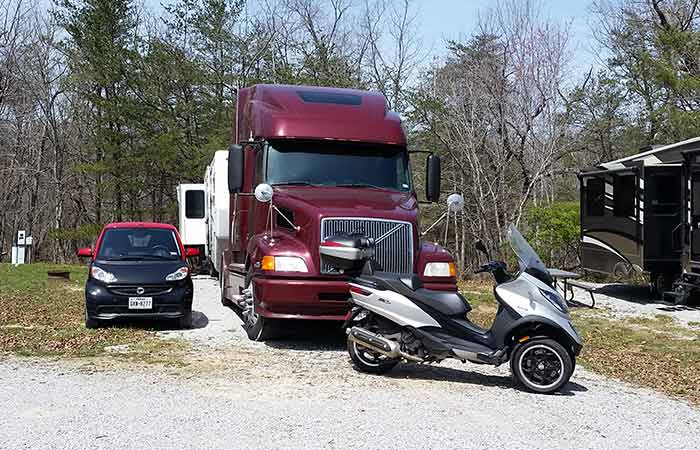 As you can see, we have one more vehicle than drivers in our family. Susan will drive the Smart the remainder of this year while Trey drives the truck (with the scooter on the back) and trailer. This winter we will see about converting the truck bed to carry the Smart. When we leave next year we will have to decide whether to take the car or the scooter. The one left behind will be stored. We have discovered a couple of cool things about this Smart Car. First, it is a convertible - that is always cool. Second, the lights and windshield wipers have an "auto" function. Obviously, when it gets dark enough, the lights come one. The wipers come on when the rain sensor detects drops on the windshield and go faster or slower depending on the rate of rain - totally cool! We are late to the newer car game so we've never had these functions and we are amazed each time an auto function kicks in.

Keeping three vehicle operational will be interesting. Just this week we ordered a spare rear tire for the scooter to be replaced soon. We had a fuel leak fixed on the truck and the Smart went in for a service check and warrantee issue. 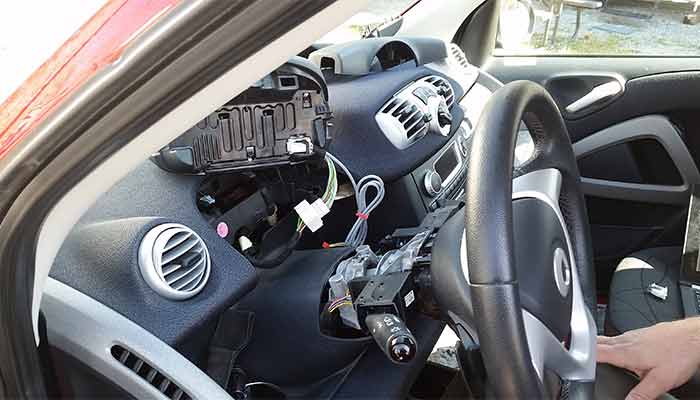 We also installed cruise control on the Smart. We realized how dependent (lazy) we were on cruise control when we both failed to maintain highway speeds for any length of time. The process was a bit daunting, but once Trey had the car (almost) completely apart the installation went smoothly. We hope that's all the vehicle stuff for a while.

The weather has been erratic during our stay. We had days filled with sunshine, rain, snow, and freezing temps. Here is a shot out our back window at the RV Park one morning. 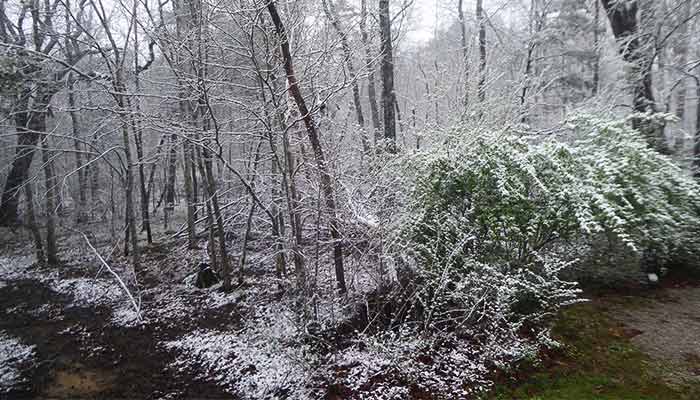 Susan and a friend (Alicia) took a drive and saw these spider webs blanketed with snow along the road. 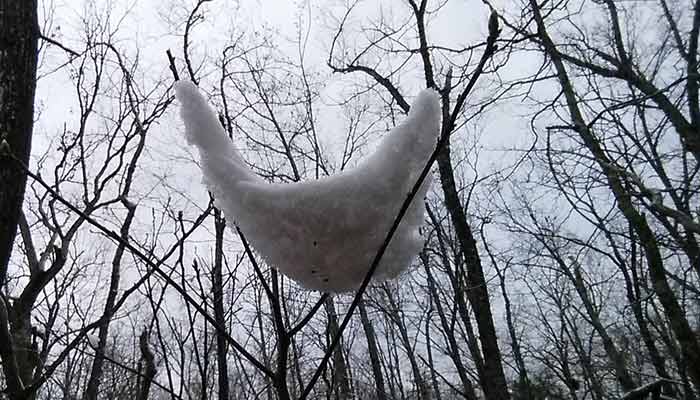 One morning while talking another friend \n the phone, Susan had to step outside because the cell connection was weak inside the fifth wheel. In the middle of the conversation, Faith asked, "Is that a woodpecker?" Susan stopped to listen...sure enough it was. In fact by the time the phone call ended and we pulled the camera out, there were four woodpeckers in the same tree! Two flew away quickly, but we did manage to snap a photo of one that lingered. 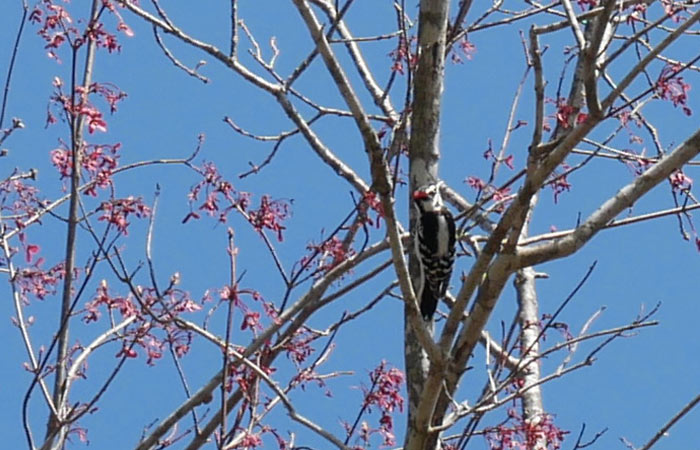 The rally, as always, was interesting. There were many seminars where lots of useful information was given: everything from RVing budgets to selecting a truck. Here Randy goes over things to look for when buying an older truck. Not sure it would have changed anything, but we wished we had this seminar before making our purchase. 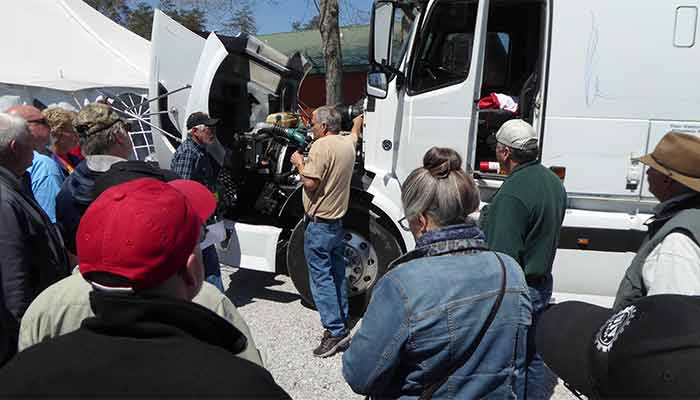 In another seminar, several men brought their gadgets and gizmos to share with the rest of the group. Everything from truck parts to kitchen equipment were on display. Some of these items were quite cool, but a little out of our budget. 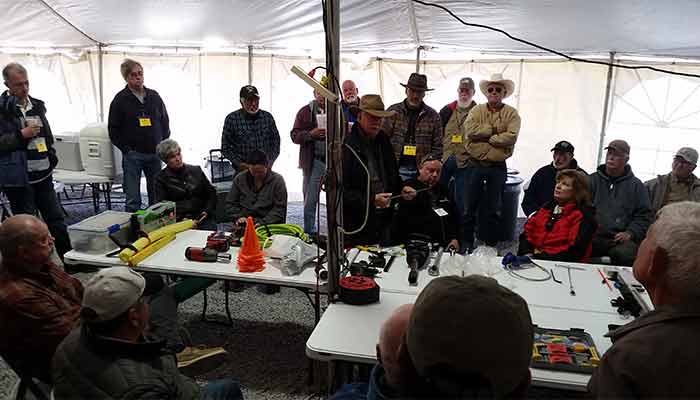 Rain in the forecast kept us here a bit longer than planned. We went to a small mall in town and saw The Wonderful World of Trains. 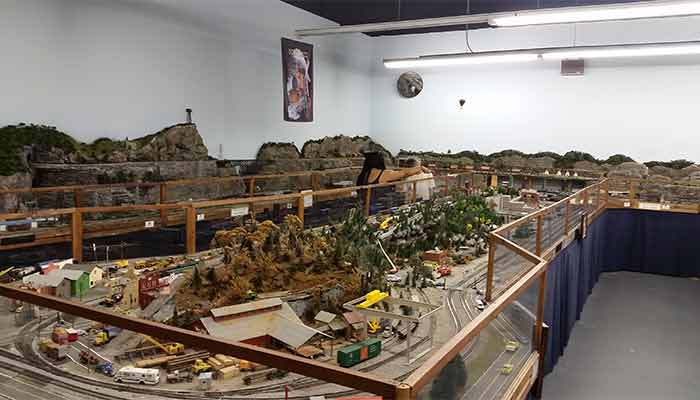 They had five different scales/gauges of trains set up. This particular track ran through four of these penninsulas. Two of the club members spend some time with us explaining how things worked and showing us interesting aspects about the models (like what happened to Jimmy Hoffa.) It was all amazing.

After several days of rain, the skies somewhat cleared and it was time to leave. We have two weeks before we have to be anywhere and we finally decided where we would work and play until May. More on that later.