We had a week between our time in Florida and our need to be in Tennessee. We decided to stop in Murphy, NC to get a glimpse of the Appalachian Mountains.

On our way to NC, we had to pass thought Atlanta, GA. Atlanta is home to a famous hot dog place called The Varsity. "What'll ya have?" The first place we visited was their main store downtown, but there are now several Varsitys around town. One happened to be on our route to NC - and in a shopping mall parking lot. Plenty of room for the big rig! We stopped for a delicious late lunch. 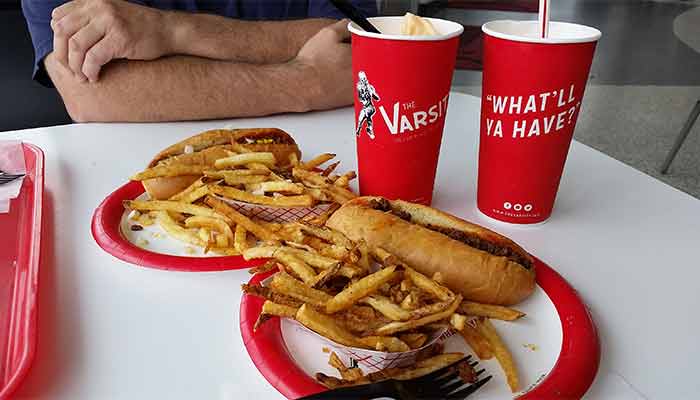 Having just completed our stadium quest (watching every MLB team play at home) we decided to add a new stadium to our list. The Atlanta Braves inaugurated a new stadium last year and since it was only about an hour and a half away, we decided to check it out. We would drive the truck back to the Varsity and unloaded the scooter (after lunch of course!) We then take the scooter through 15 miles of North Atlanta traffic to see the game.

Trey tried to order tickets online, but from the time he selected the $8 tickets to the time we attempted a purchase, the price jumped to $25/each. Hmmm... we decided to buy our tickets at the ticket window. We checked out the parking online before driving to Atlanta and developed a plan. There were multiple lots round the stadium, so we would just drive to one of the distant lots, park, then walk to the stadium. Simple. We've done this over 30 times in different cities.

The first lot we attempted was permit only. That's strange. Usually the lots farther from the stadium are cheap cash lots. The next lot was also permit only. We tried a few lots on the other side of the highway. All permit only. We asked the guy at the driveway where visitors could park if they didn't have a permit. He had no clue. He sent us to a mall about a mile away. The guy at the mall said we would be towed if we parked there. "Where CAN we park?" "I don't know, try this other mall down the street." "Do they have a shuttle?" "No."

We drove to the next mall and parked in the lot of an abandoned store. We then walked a mile and a half to the stadium. Between traffic, lot-looking, and a short hike, it had been two hours since we arrived.  This was no longer a fun day at the park. At least we were able to get the $8 tickets! 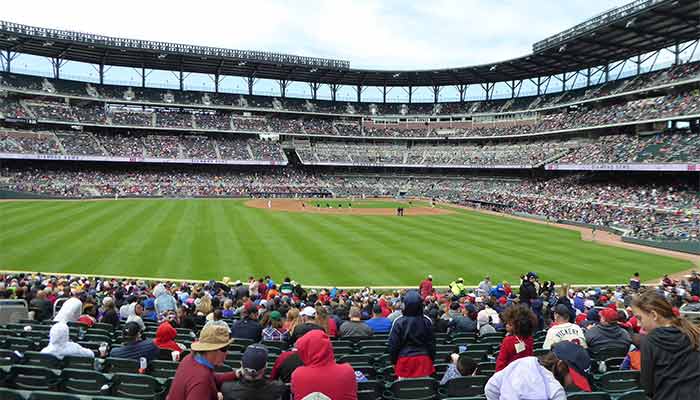 The ball park wasn't bad (for the Braves anyway). We sat in a couple of different sections to get various views of the field and walk the perimeter of the field. Everything was clean, shiny, and new. There were also good places to stand and watch the game. By the time the game was over, our moods were considerably better. The mile and a half treck back to the scooter (uphill) gave us our exercise for the day. So, when we stopped at the mall parking lot to load the scooter onto the truck, we needed to eat another dog and frosted orange. Man, that is a good dog! We drove back to our campground in North Carolina that evening.

Rain was in the forecast most of the week, but we did get one good day of scenic driving in. As we drove through Appalacians of North Georgia, it felt good to be back in the mountains again. 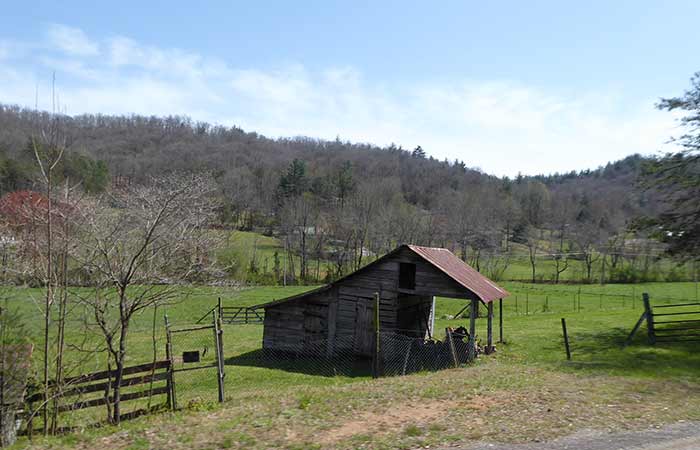 Winter is just leaving the area and spring colors are popping up everywhere. Colors were mostly found in the trees and bright green grass. 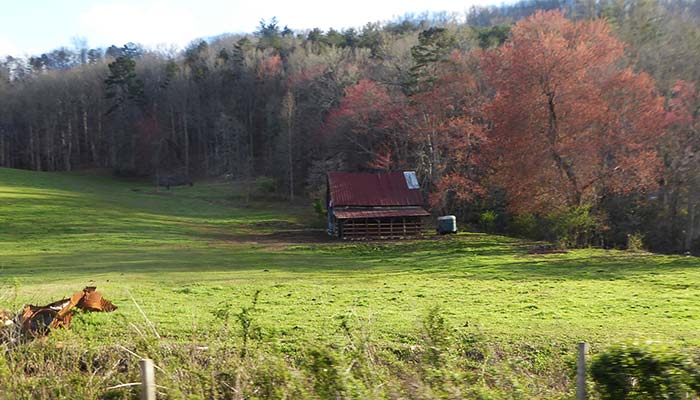 Everywhere we looked was loveliness. 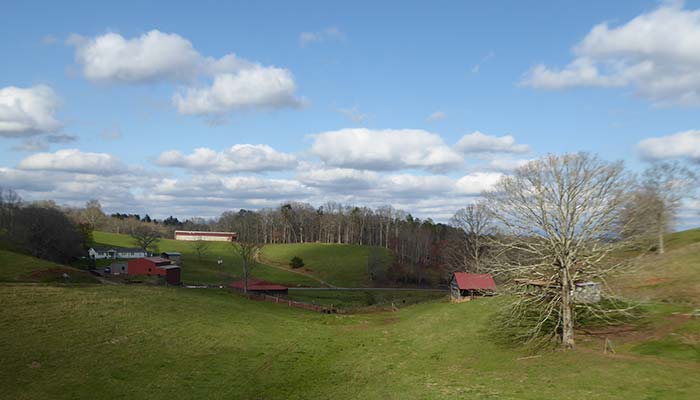 The rest of the week was cold and rainy. The afternoon of our pre-departure day the skies cleared for about two hours - just long enough for us to drive to the largest Ten Commandments in the world at Field of the Woods. 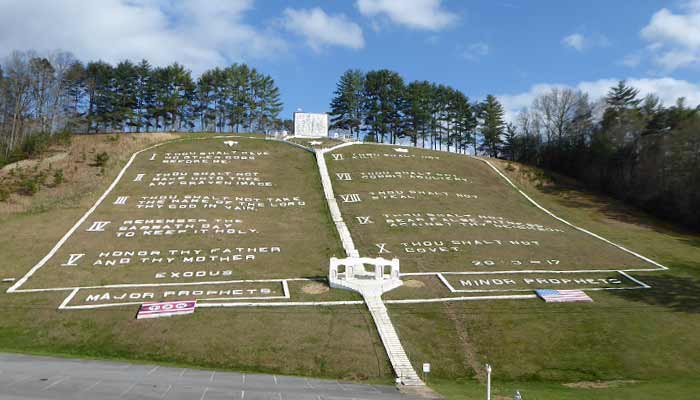 It was an interesting place to explore and there were many paths to walk.  At the time we visited, there was just one other couple in the park, but we imagine that once the weather warms up a bit, the park will be more crowded. We drove behind the replica tablets and got a nice view of the mountains. 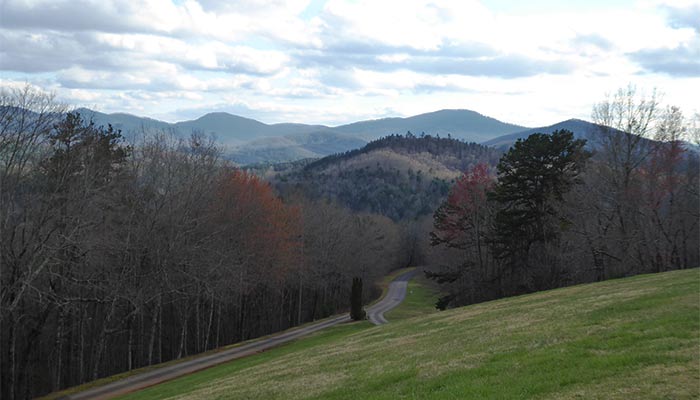 The remainder of our time in Murphy, NC we worked. We were able to complete a couple of projects, make progress on a few more, and planned for future. There is always something going on! The past three weeks we have been able to get back into our normal work routine a bit more. During winter, our job focus is moved different directions and time to work on projects for ThinktheBible.org is much more limited because of this. Once on the road, our time is more our own and we are able to devote larger portions of that time to developing lessons and aids for the website. When cold and rain change some of our sightseeing plans (like they did this week), we still have stuff we enjoy working on waiting for us at home.