As we said in our previous post, we came to Florida for one reason (I know what you are thinking, but it is not the heat or the humidity!)

We have both been baseball fans since our youth. Susan grew up in the shadow of the Astrodome and cheered Cesar Cedeno. Trey was also an Astros fan and played from little league through High School. Since we have been married, we have seen every Major League Baseball team play in their home stadium. Except Tampa Bay.

We went to St. Petersburg twice  to watch a game, but both times we failed. Once was before our RV life, but a storm/tornado and lost purse kept us from the game. A little scary at the time, but disappointing in the end. The second time we were staying on the opposite coast of Florida and rode the scooter across the state to see a game only to find out we were a day early. (Another storm caused a last-minute change of plans and we didn't double check the schedule. Sigh. Yes, it was quite embarrassing!)

This time we bought tickets early and checked the schedule multiple times. We planned to ride the scooter to the game, stay in a hotel overnight, and ride home the next day. We were camped 200 miles away, so this would be a bit of a trek for us. Our plan was to leave before 7 AM and enjoy a leisurely drive to the park. We woke up at 6:50 AM. :( Undaunted by yet another looming failure, we quickly got ready and were out the door 25 minutes later. A deep fog had set in the coastal area of Florida and we rode in haze the first two hours. 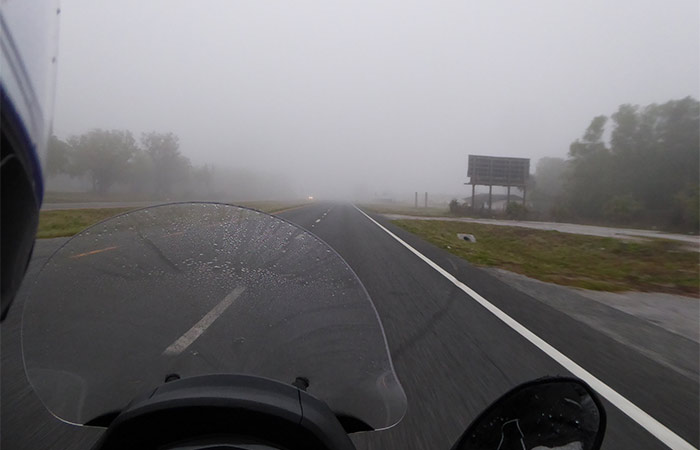 We arrived in time for the first pitch and relished in the fact that we finally made it to a Tampa game. When we have visited various parks, Susan has purchased a stadium pin at each park. Not realizing how close it was to first pitch, she approached the register just as the National Anthem was beginning. The entire park staff, store personnel, concessions sales, stopped, turned toward the field (and the unseen flag) and stood at attention until the anthem finished. We really love baseball!

Tropicana field is a nice park, but attendance was low. I remember many times like that for the Astros. We sat the first five or six innings, then walked the park the last few. We ended the game in right field in an area for standing only. 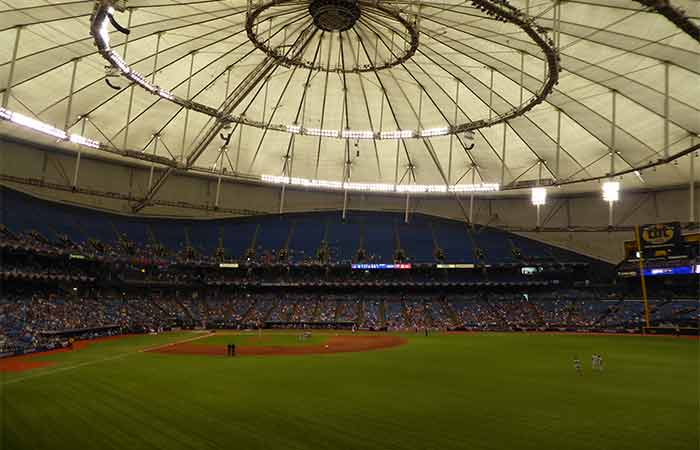 Since the name change a years ago, (from Devil Rays to Rays) there was a little confusion about what "Rays" represented. Was it the animal like in the pool below? Or was it the sunburst shown in their team logo? We asked the park officials and didn't get a solid answer. We did learn that the previous day was the 20th anniversary of the team's existence so for that day (throwback day), they were definitely Devil Rays. What it represented the day we attended is left to the imagination. I think once the Rays figure out who they are, they will win more games. 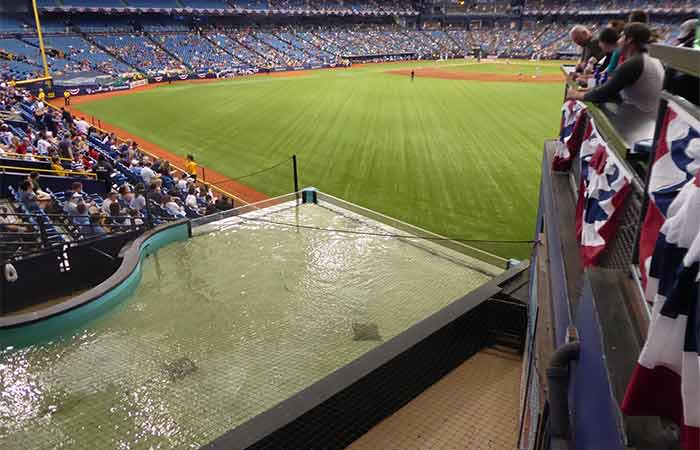 We stayed overnight in a hotel in Tampa. We drove home via a scenic road but, again, it was foggy so the scenery could not be seen. About halfway home, we stopped by Homosassa Springs Wildlife State Park.

We stopped for the manatee. Manatee are one of the top three things about Florida. Here is a young fellow swimming by the observation deck. 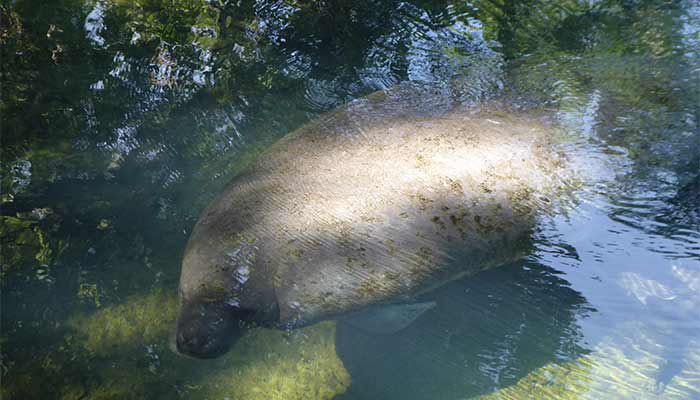 There is an underwater observation area also. This little guy gave us a brief glimpse of his face before he returned to the task of scratching his back on the wall. The water was much clearer than it seems in this picture. The glass in the underwater structure is old and scratched. There is also a bit of algae growing outside. It makes the water seem murky. 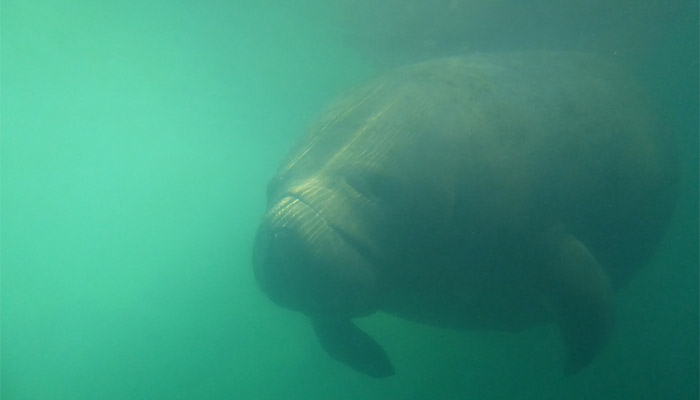 This park had more than just manatee. We enjoyed a stroll around the lagoon viewing various Florida natives. It was a lovely day a a perfect break from a long drive.

This guy made me take about 20 photos before he would stand still and face the camera. 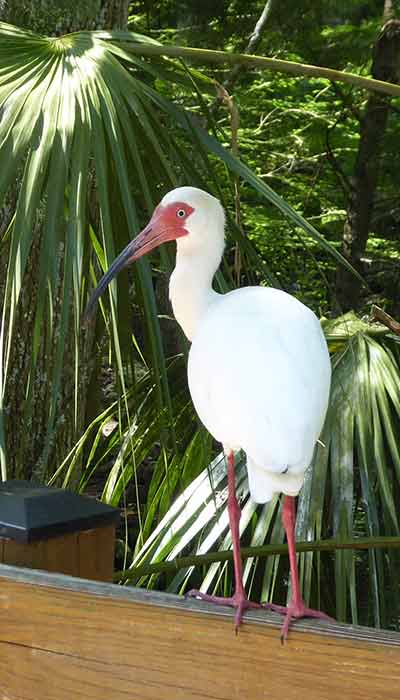 This pelican below is flirting with a female in the nest in front of him. She eventually accepted his advances, but this is a family blog, so the photos stop at courtship. 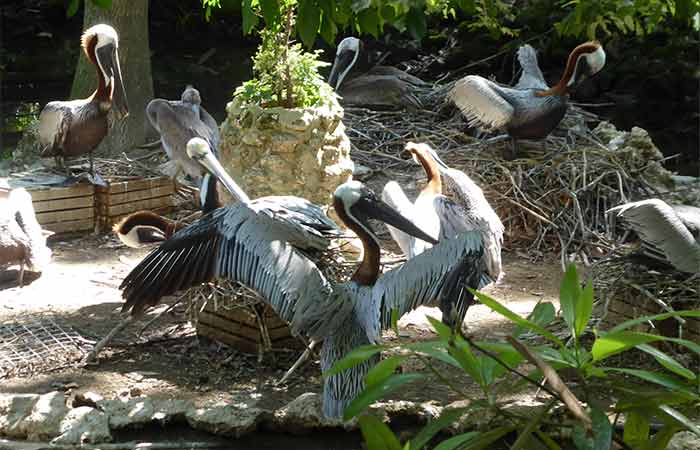 These birds always amaze me! How do they know to pose just like those pink lawn birds? 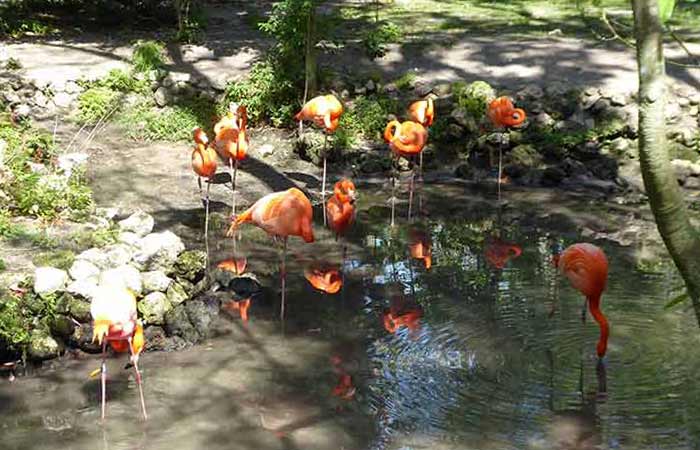 We had a good time in Florida and we loved completing our baseball stadium goal. Of course there are new stadiums that have been built since we began this quest over 20 years ago. We've been to a few of those already. Not sure we will be able to keep up with them all - or it might take another 20 years to finish the new ones.

Our only other open quest is visiting all 50 states. North Dakota has eluded us to this point. It won't happen this year, but we hope to finish that goal soon.

How about you? What fun goals are you working toward completing? We need a new memory collection theme to work towards the next twenty years - give us some ideas!