Most of our errands had been to Rexburg or Idaho Falls in the South. This was an hour to hour and a half drive we take twice a month for groceries or other things we might need but can't find locally. We learned of a photography class in Bozeman, MT and decided to drive north for errands this time. The class covered the brand of cameras we have owned for the past ten years and we looked forward to learning more about the menu system and how the camera worked.

We worked most of the morning and left about lunchtime for Bozeman. The drive through mountain valleys and along rivers was very nice. 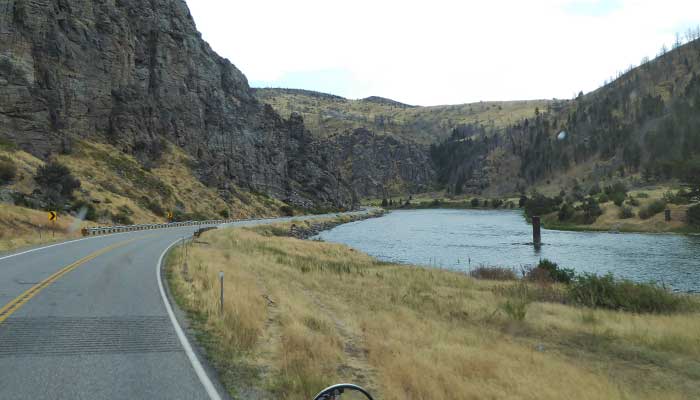 We met in a classroom at Bozeman Camera Store for about 30 minutes and received tips and instructions for urban photography. 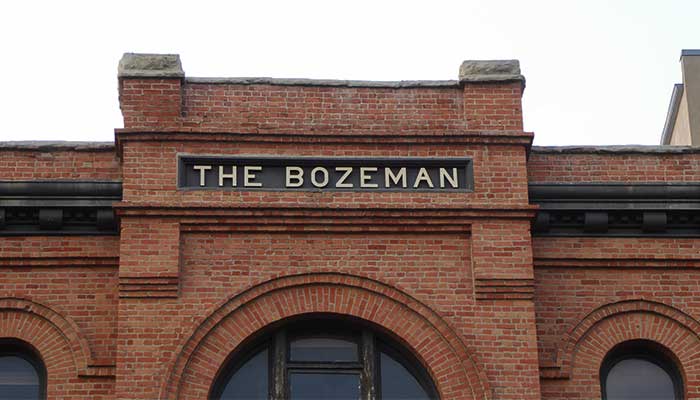 We learned some new tricks we could try and confirmed some old strategies we were already employing. Then everyone got in their cars and drove to downtown Bozeman to practice what we just learned. They had a variety of new cameras and lenses you could borrow to shoot on this city walk. 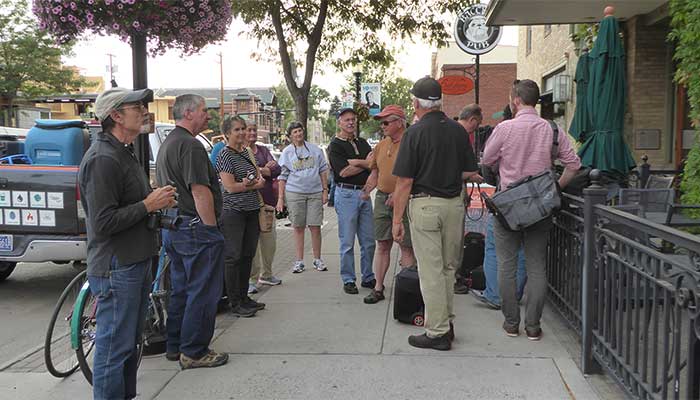 There were all kinds of experience levels present, along with all kinds of cameras. It was interesting to see what others did as we walked through town and got various shots. We tried to listen and learn more than practice shooting at this point. We were surrounded by some very knowledgeable folks who were willing to share their expertise. We spent about two hours walking around the city: Bozeman is a great place! After sunset, we turned in our borrowed camera and departed.

We had noticed that one of the headlights on the scooter was out. We have two on the bike: one low beam and one high beam. The low beam light should be on anytime the engine is running. This is used for daytime visibility and nighttime driving. Most of our driving is done during the day, but we wanted to get this fixed as quickly as possible. We were glad that the lamp was sold at the local NAPA auto store, so we picked one up and got ready to replace the headlight lamp. You've probably heard the joke "How many _______ does it take to change a lightbulb?" Well, that joke took on new meaning as we began to replace this bulb.

Without going into all the tedious steps required, here is a picture of the parts we had to remove before we even got to the headlamp. 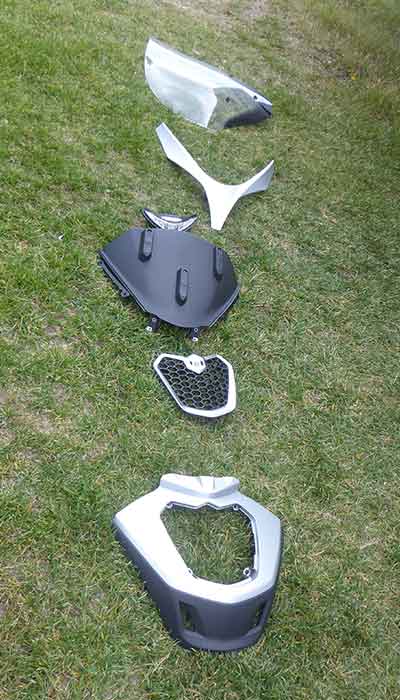 There are one or two other parts missing from this picture because it began to rain (pour) before we finished (of course!) and we had to pack up and cover up quickly. When the rain stopped, we were just concerned about finishing up the job.

Here are the bolts we had to keep saved and sorted as we removed those parts. Trey remembers four different driver bits he used, but there may have been more. 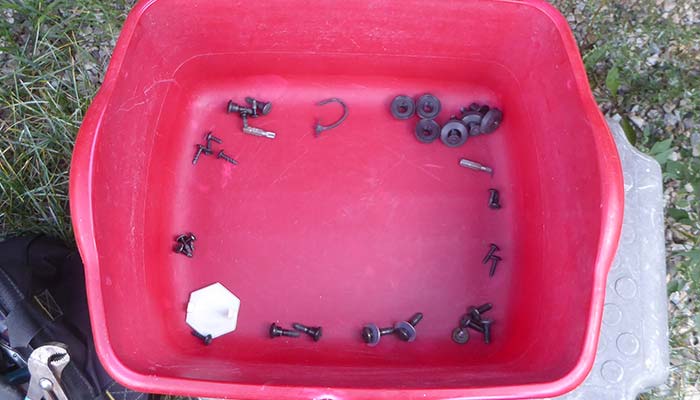 The bulb was finally replaced and all the parts went back together with no extras left over. Everything worked!

We decided to test the headlights on a trip into the park the following day. It was still quite smoky here, but we decided to catch a few short hikes and a waterfall we had not yet seen.

We stopped at Bunsen Peak to hike partway. We hoped to get a glimpse of a waterfall below and catch a vista of a distant Mammoth Springs. We didn't get a good view of either, but it was a nice hike and we got some exercise and a view of the valley and road below. 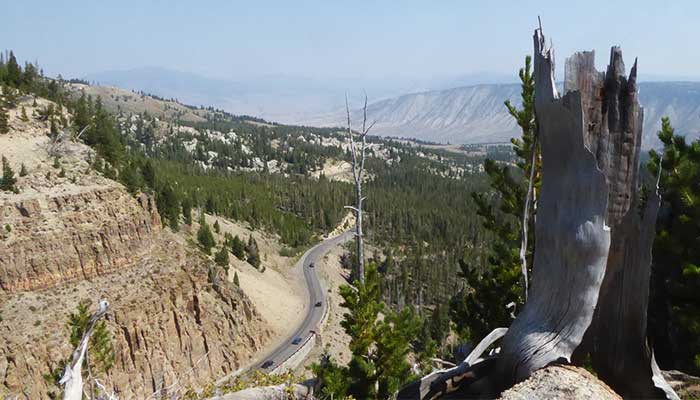 This is the view from the other side of the mountain. 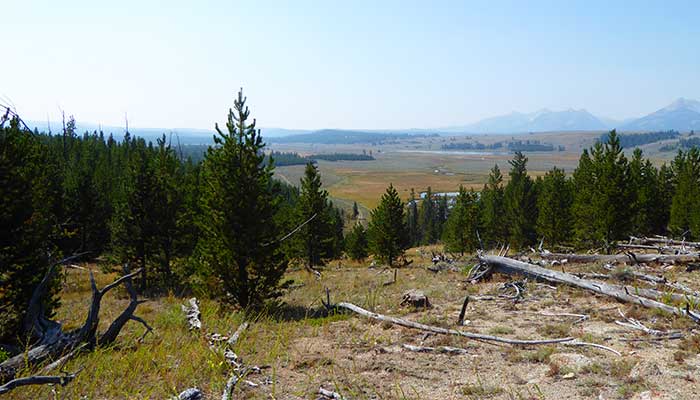 We didn't have time to hike to the top, but we have learned that partial hikes are quite rewarding. To hike Bunsen Peak was over four miles and would have sent us up 1300' in elevation. We used this hike as a short walking break from the bike. We walked about a mile, went up about 200' in elevation and still had plenty of energy for the remainder of the day. We didn't get the views we would have at the top, but we liked what we saw and were ready to continue.

Our next stop was Undine Falls. This waterfall was near the road but not visible from it. It was another nice stop on our drive. 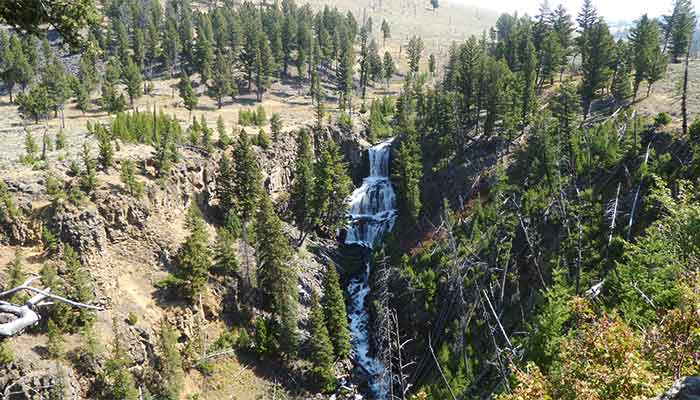 We drove to Cooke Cafe hoping to some good food to fill our empty bellies. Denied! The menu choices this week were all soups. Soup? We've been riding and hiking and it was two hours past lunchtime. We needed burgers! We found a place just up the road and had satisfying burgers and had shakes for dessert. We were stuffed. You can't feel that good and miserable with soup!

We stopped a few times along the way home to stretch our legs and saw some vibrant late summer flowers... 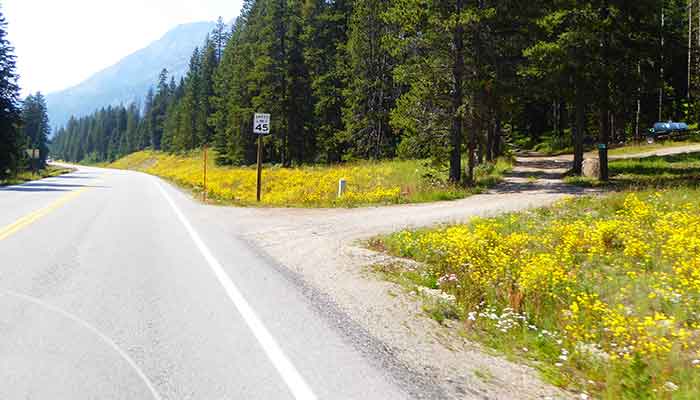 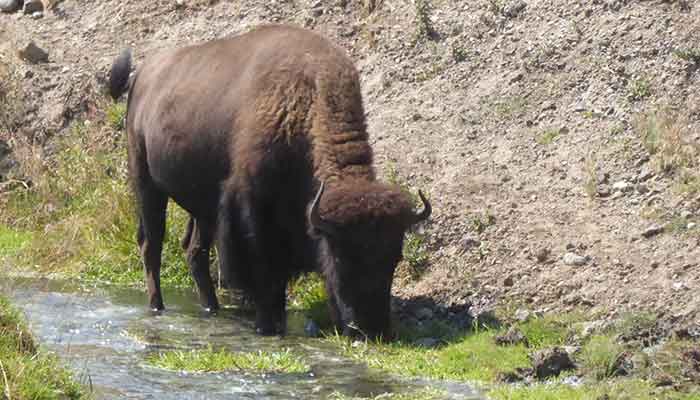 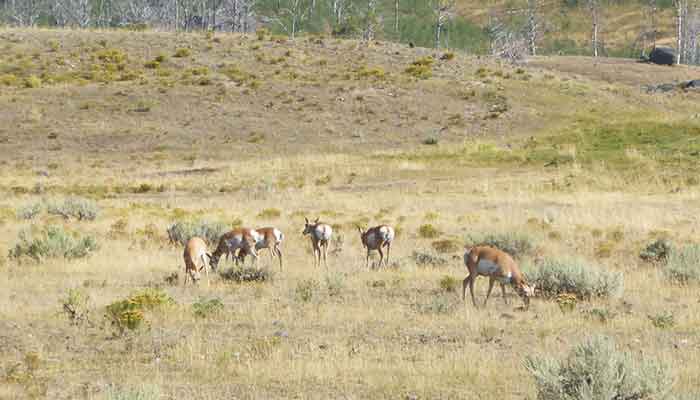 The headlights were still working when we arrived home.

The smoke grew worse and there was rain in the forecast, so we remained home a few days and worked.

Our next hike was Natural Bridge. Along the way, we ran into another Bison jam. There were bison crossing the road from both directions and we waited a while for the path to clear. 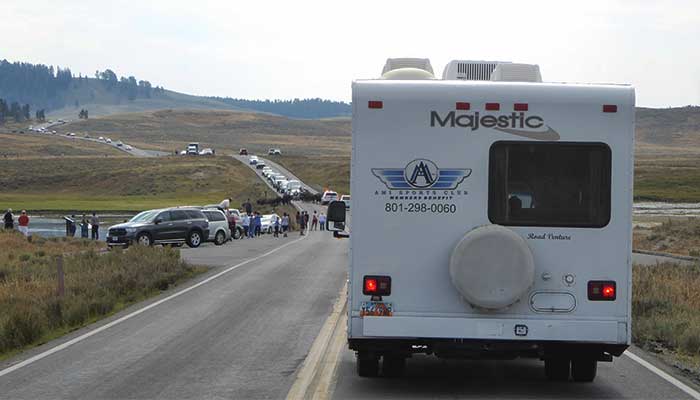 It wasn't too bad. There were interesting things to see as we waited. 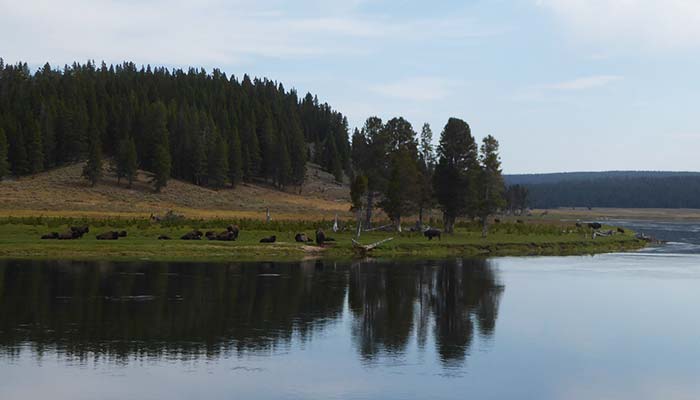 We ate lunch before venturing on the Natural Bridge hike. Then it rained - heavily. Fortunately, our picnic table was covered. Susan was prepared to skip this hike and dodge the rain home, but Trey insisted we venture on. Venture on we did. It was an easy hike, about 2.5 miles round trip. We got a glimpse of the bridge as we approached. 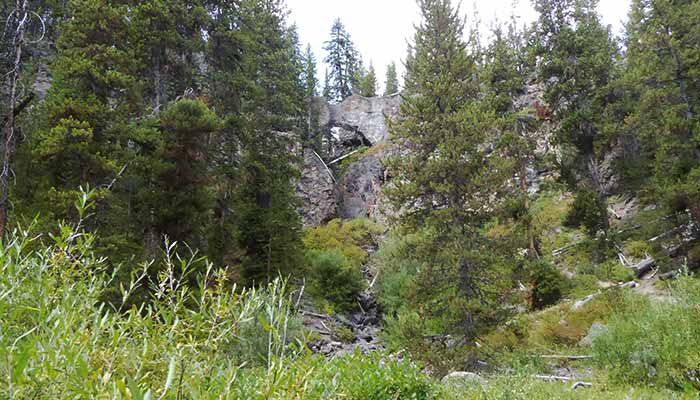 While standing around the base of the bridge, we noticed a trail leading up the side of the hill. "Let's just see where this goes!"
It took us up the mountain via switchbacks and we were able to see the bridge form the top. You can see the steps that helped you get from one side of the creek to the other. We wandered around up there for a bit and got some pictures. Then we noticed the trail was leading down the mountain on the other side of the stream. 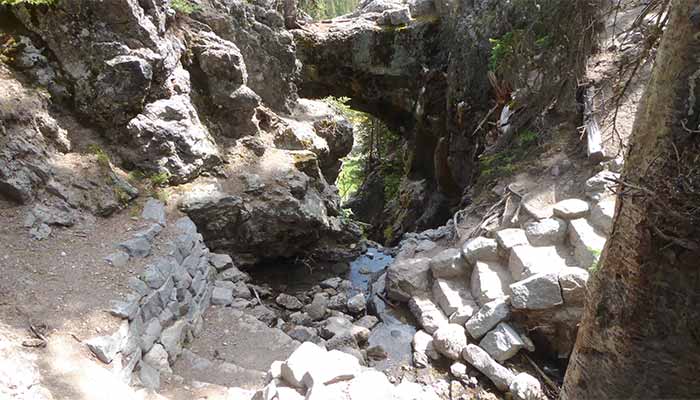 Those up and down trails were a great addition to the viewing place below. We scrambled back down the mountain and joined up with the original trail. We ran into a couple of light showers on the hike back, but nothing that got us very wet.

The end of the month, Harvey kept us fixed to our computers. With no TV signal, we relied on internet to see what was happening with the hurricane in Texas. Thankfully, our family and friends are fine. Some have a few messes to clean up, but all people are safe. We were encouraged by the countless examples of people helping people and the generosity displayed by fellow Texans and our gracious neighbors across the US. There will certainly be numerous stories of wolves trying to take advantage of the hurting. We hope the stories of men and women of character continually showing love outshine the darker elements of our fellow man. 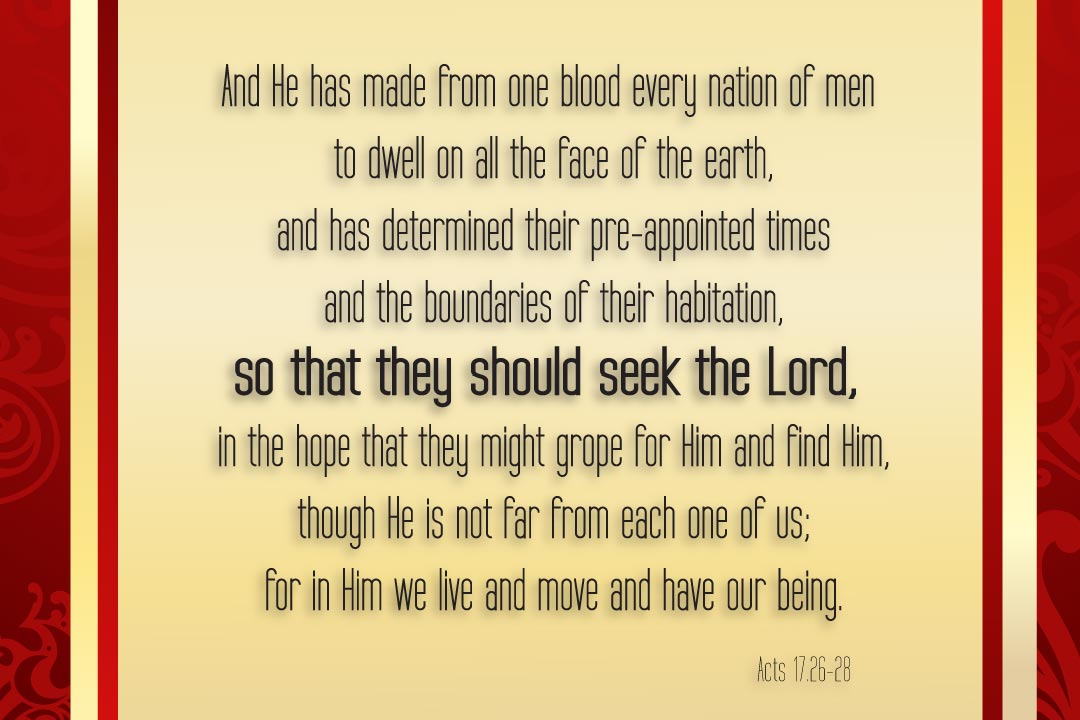