One smoky Sunday after church we decided to visit the Earthquake Lake Visitor's Center. Even though it was quite close to us, we had just recently been alerted to its presence (thanks, Chris!). It was interesting to learn about the 1959 earthquake that changed the landscape of this area.

In the middle of the night, an earthquake set off a landslide and an enormous amount of earth slid off a mountain damming the Madison River and forming Earthquake Lake. The disaster part of this event was that the land slide fell and destoryed a camping area and twenty eight people lost their lives that night, some are still buried beneath the rubble.

Here is a picture of the lake formed by the landslide dam. 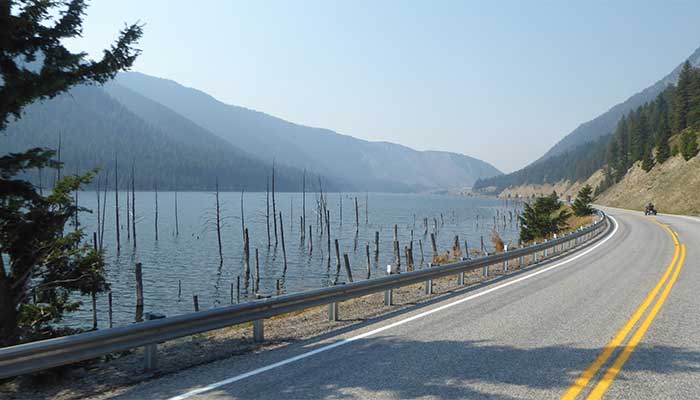 At the visitor's center there was a children's play area showing an overview of the area. The older girl is sitting where the landslide began and the boy is standing near where it finished. 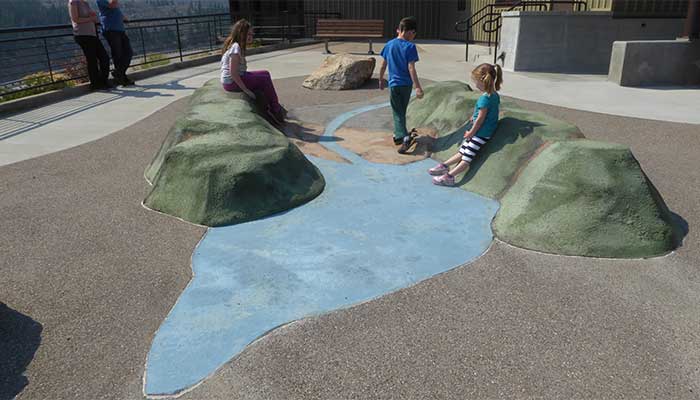 Here is a picture of the slide area. A big part of the mountain just fell off. Trees and vegetation are slowly returning. 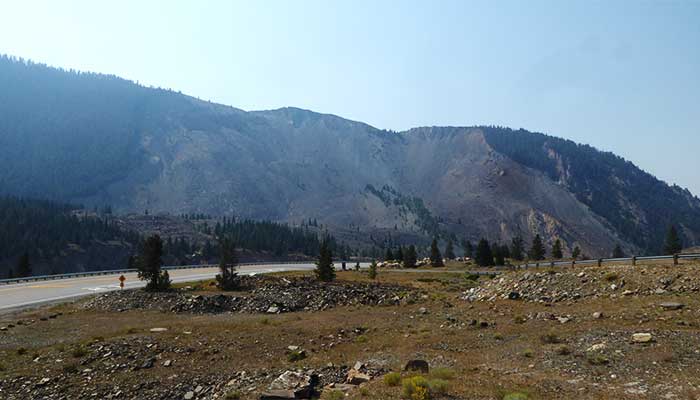 This is a shot directly across the river from the slide area atop the massive rubble mound left behind. In the distance you can see the visitor's center. This shows about two-thirds of the rubble mound. There is still another third behind us. The plaque on the rock (a giant chunck of stone that moved with the landslide) bears the names of the earthquake victims. 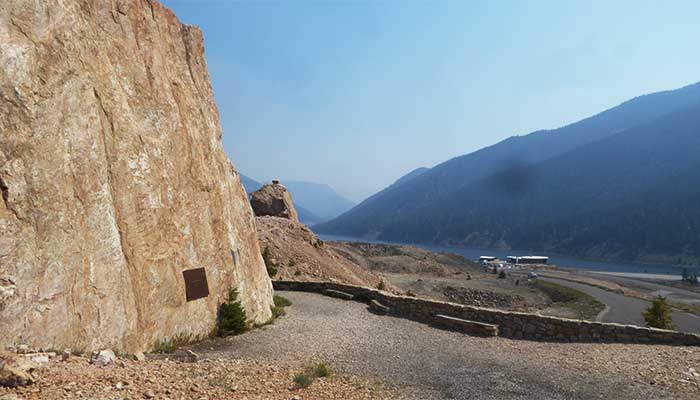 Walking out to the end of the mound, you can see the valley opening to the river below. 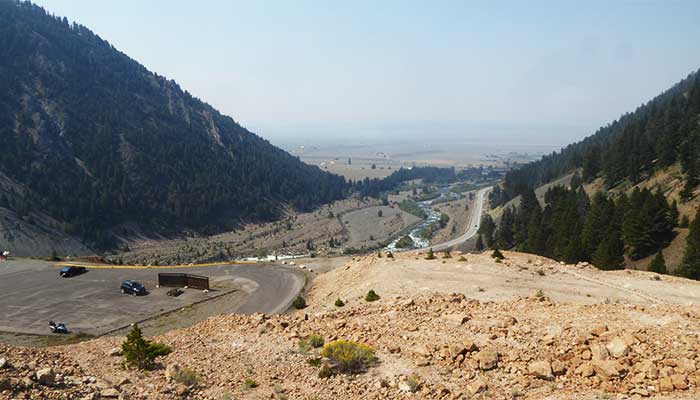 When they dug the channel/spillway to relieve pressure on the earthen dam back in 1959, they dug it straight. You can see how the river is reclaiming its natural serpentine shape as it continues to cut through the slide/dam.

As we left the area, we looked back to see the massive pile of earth in the distance. It was a very sobering visit. 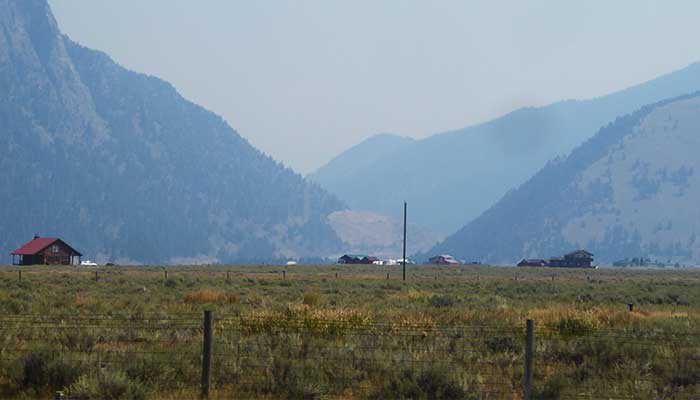 Monday was eclipse day! We did not have a particular destination in mind, only to get inside the totality (40 - 60 miles south from temporary summer home). We had researched different areas on previous trips to the grocery store and had several options in mind depending on the conditions that day. We set out five hours early and traveled only 40 miles in two hours - this was through rural Idaho! We considered driving another hour or two (20 miles) to be in a more central area, but decided that the traffic congestion wasn't worth it for an additional 30 seconds of totatlity. We could get about 90 seconds if totality in Ashton and that was good enough. After waiting in line 30 minutes to use the bathroom (Susan), we set up our lawn chairs, put on our silly paper glasses, and waited.

We weren't alone. The park was full of other thrill-seekers. 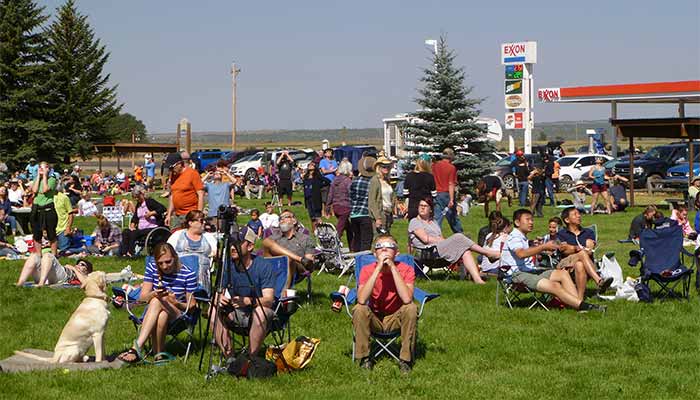 While we realize the web has been inundated with eclipes pictures, this blog is our personal journal so we will post our own less-than-perfect-photos for our own memories. 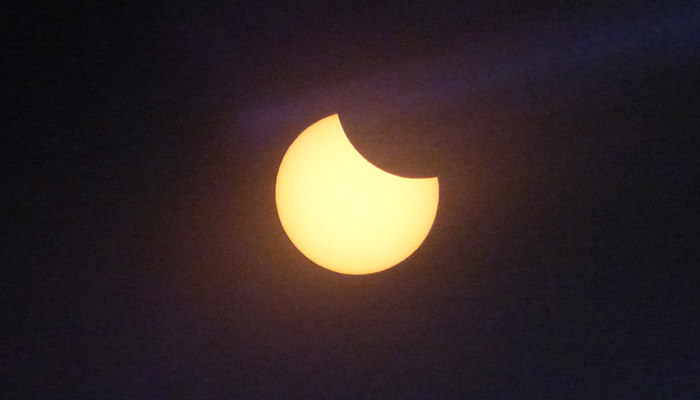 Because the cresent shaped sun looked so much like the moon, it seemed somewhat natural (other than the fact that we were viewing it through solar glasses!) 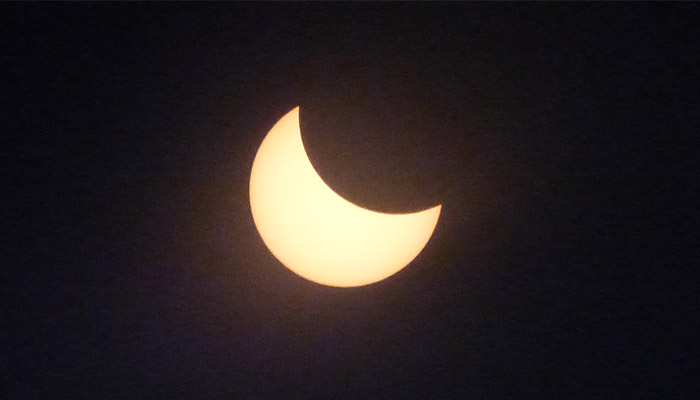 It grew more moon-like as each minute passed. Only when we thought about the sun being covered by the moon did the awesomeness of the event sink in. 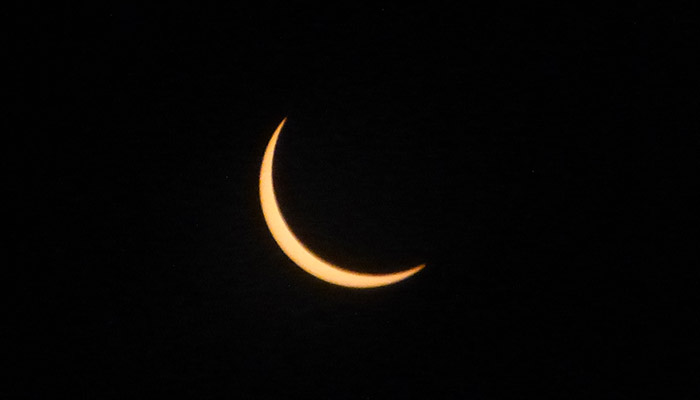 But even at it's smallest sliver, when you removed the filter from the camera and took a naked picture of the sun (older camera, wide angle so nothing was ruined), it still looked like a giant, round ball of light in the sky. You only noticed it getting a little dimmer and a little cooler without the eye protection. 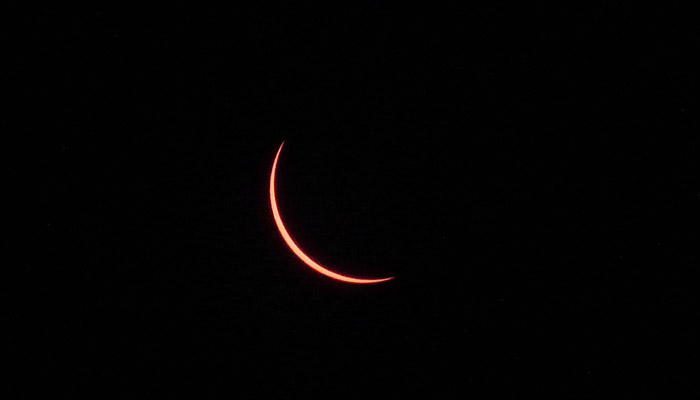 At the point of totality, all familarity changed. This was truly surreal. The ninety seconds of totality was not enough to absorb what was going on around us. Ninety minutes would still not have been enough! We understand why folks travel the world to catch glimipses of a total eclipse.

The crowd could not contain themselves when the sun reached totality. It had been a pretty docile crowd up until that point and the vocal exclamations at the beginning of totality told the story of complete surprise and wonder. The other striking memory was the temperature. About 20 minutes before totality the temp began to slowly decrease. We wish we would have measured before and during because there must have been a 20+ degree drop. We have felt that during the first winter cold front in the fall, but those were accompanied by winds. This drop had no wind and the temps began to rise as the sun slowly returned to full view.

It did not go totally dark, but there was a 360 degree sunset during the eclipse. We could see some stars, but only the brightest ones. 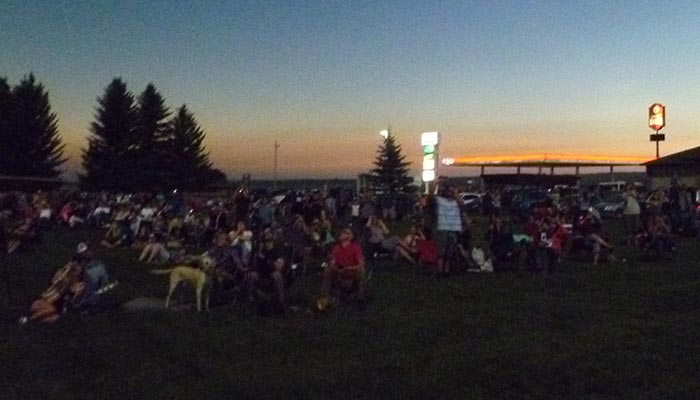 We left about 20 mintues after the totality ended. Returning trafffic was thick, but we moved well. We were home in less than an hour and finished wachting the sun re-appear from the trailer. Others we talked to said that trip home took them five hours. They left just 30-40 minutes after us. Glad we left when we did!

We plan to be in the path of the totality when the next eclipse comes to the US in 2024. While we don't plan on spending the entire time taking pictures, we do plan to use more than one camera so that the settings/filters don't have to be adjusted for the different phases of the eclipse. It was fun to see what we could get with the cameras during this eclipse, but most of the time we just viewed the phenomena - awestruck. There really are no words to adequatly explain this experience. Hope that doesn't sound too "feely" but it truly was incredible.

A day or two later, we took a ranger-led geyser hike near Old Faithful. We saw three geyser eruptions. The first one was Lion Geyser in the distance. It was a nice show. 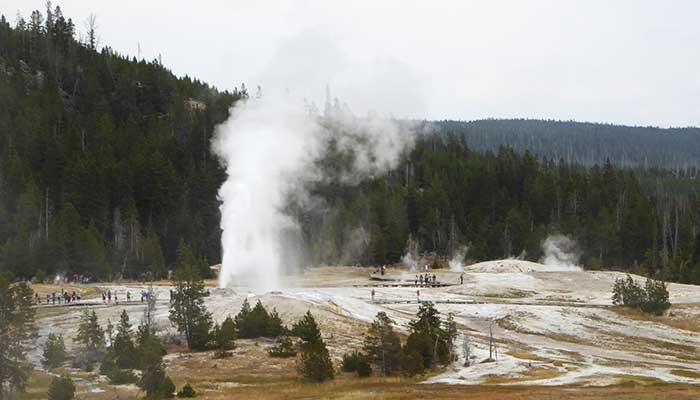 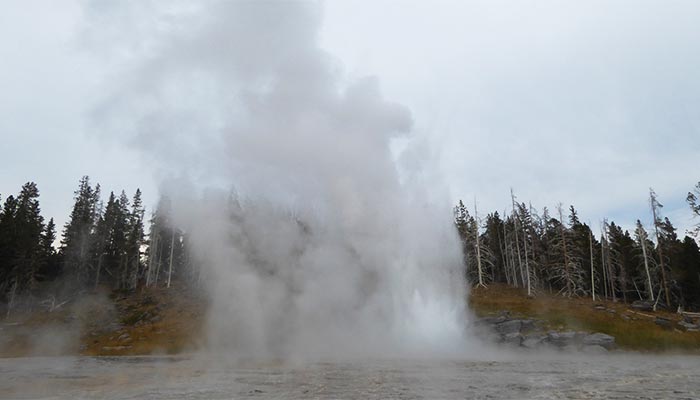 There was a crowd patiently waiting for the show. 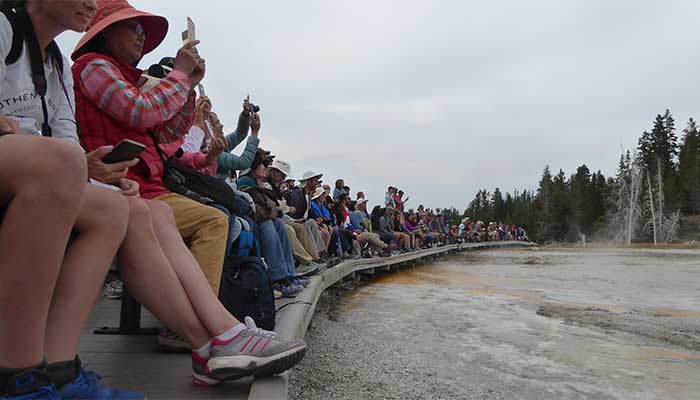 We followed our Ranger around the Upper Geyser Basin and learned a great deal that day. Here are a few more shots.

Firehole River meandering through the basin. 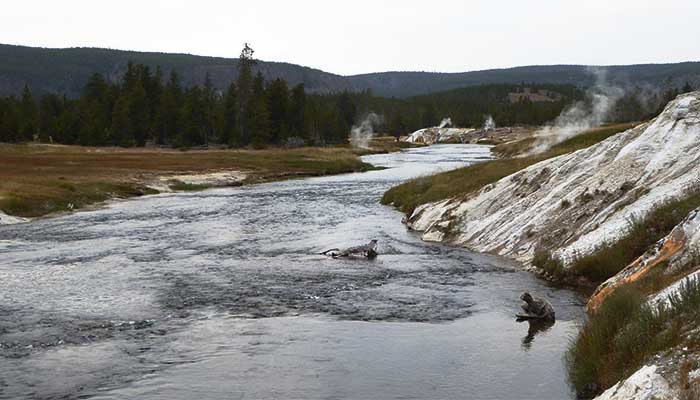 Morning Glory Pool. It used to be blue, but water temp changed (possibly because of items thrown into it through the years) and so did the thermophiles growing there. 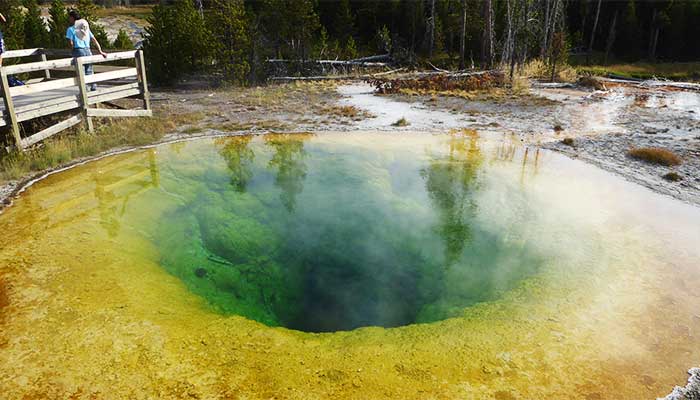 We feel as though we have had a lifetime of experiencing the wonders of creation this summer. This week was no exception.

Marvelous are Your works, And that my soul knows very well.
Psalm 139:14