A Week of Hikes

Our adventures on the Ranger led hikes encouraged us to explore more of the back country ourselves. Armed with critter spray (both bear and bug) we set out for more adventures.

Our first adventure was to Ice Lake. This was the hike we skipped a few weeks ago because of the mosquitoes. We knew it wasn't a long hike, so we worked at home until about 2 PM, then set off to the park. The hike took us through about a half-mile of new growth forest. The fallen trees you see here are from the 1988 fire. They burned, died, and fell while the new lodge pole pines thrived on the forest floor. As we passed the fallen trees, you could see a few fresh cuts where lingering trees had recently fallen. There are still a few dead tree trunks standing along the path, but we are sure they will soon fall too. 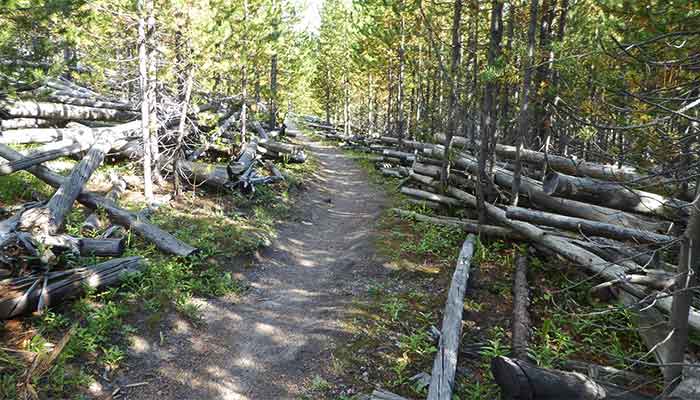 Once we got to the lake, we joined another trail to the north side of the lake found a nice place to sit, and enjoyed the view for a while. 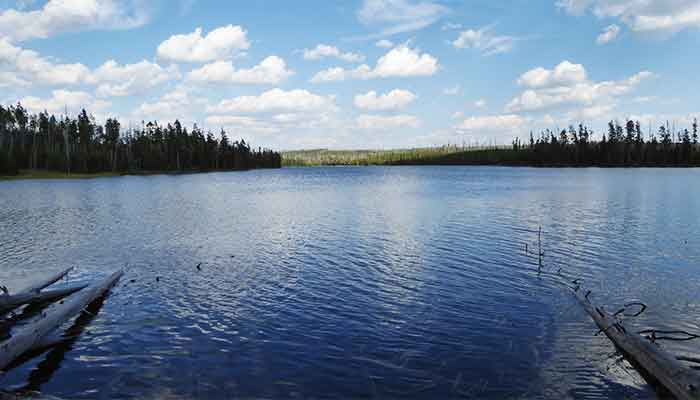 It was a quiet afternoon and we found ourselves refreshed in our secluded spot. On the way back, we explored a primitive camping site on the opposite side of the lake. There were a couple of tenters in one area so we walked to another area. Much to our surprise, we came upon some man-made facilities. "Nope, I think I can wait." 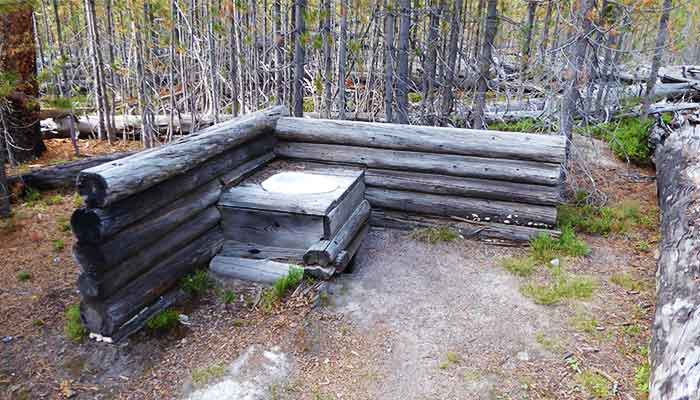 We found out yesterday that the Gibbon Tributary basin would be closed so that the National Park Service could begin the process of eradicating invasive fish. We were glad we had already done the two hikes in the area to be closed (Little Gibbon Falls and Ice Lake).

Our next hike was a little more daring. We had explored the trailhead to Lone Star Geyser a couple of weeks before. Lone Star is a geyser that erupts about every 3 hours. The site says there is a shorter preliminary eruption (3-5 minutes) followed about 20 minutes later by a a longer eruption (15-20 minutes) then the geyser goes through a steam phase before going quiet before the next eruption (that's a lot of numbers to remember!). There was no way to know the time of the last eruption - there is a log book at the site, but you must hike 2.5 miles to the geyser to look at the book. There is a chance you would have to wait hours until the next eruption.

We had purchased collapsible chairs a couple of years ago for the scooter and they have come in handy a few times. They would be needed if we had to wait. We've gotten pretty good at making lunch/dinner very small, and water pretty much consisted of our water bottles and a little extra just in case. We loaded up water, dinner, chairs, and reading material for our geyser visit that day and hit the trail shortly after lunch.

The trail to Lone Star Geyser is pretty easy. There isn't much elevation change and it follows a pretty river. 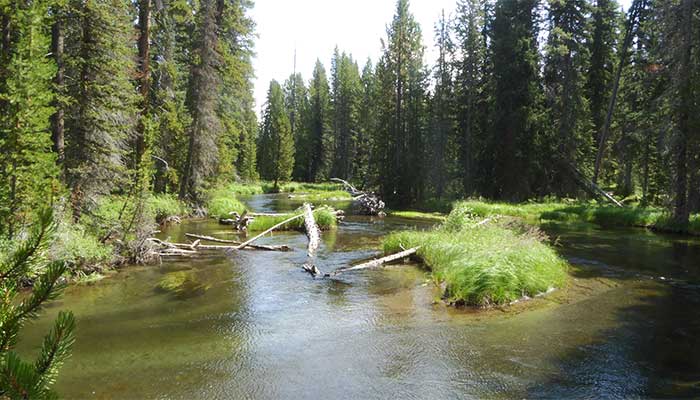 We saw a few folks coming from the geyser and asked when the last eruption was. "Noon." Great! It was 2 PM and we should be at the geyser by 3 PM. This was great timing, but we would need to walk quickly. Then, about a mile and a half into the trail, we passed a family. "Just erupted about 20 minutes ago - it was great! A short while later we passed more hikers. "Yes, it just erupted about 1/2 hour ago, but you can wait until the next one, it was worth it!" We passed a few more groups as we continued toward the geyser. This pretty much convinced us we had missed the eruption.

A little disappointed, we arrived at the geyser about 2:45. We decided to wait a few hours to experience the geyser. 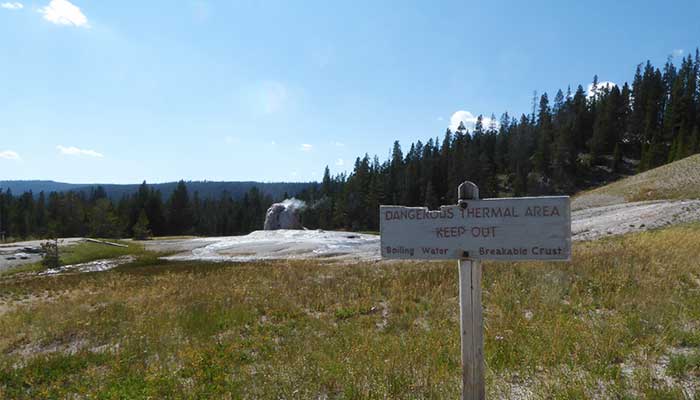 Within a few minutes, it erupted! We were only about 40 or 50 feet away from the geyser and it was incredible to be so close! Much closer than Old Faithful. We quickly pulled out the camera and snapped a few pictures before it stopped. According to our calculations, it lasted about 5-7 minutes. We figured the folks walking passed us on the trail had seen the first eruption, but we knew there was supposed to be a second.  However, the eruption we saw was only five minutes... not 15-20 minutes like the website said, so we were a little confused. There were maybe a dozen folks when we arrived and after this second eruption, about half of them left. We were considering heading back to the parking lot when we overhead a gentleman talk about a third eruption. When we asked, he said neither of the first two eruptions were very long and they didn't finish with a steam phase. He had been here as a boy and clearly remembered the steam. We decided to wait a bit longer to see if there was, indeed, a third eruption.

After about 20 minutes, there she blows! It was much louder and higher than the previous and this one lasted about 15 minutes before the water turned to steam. 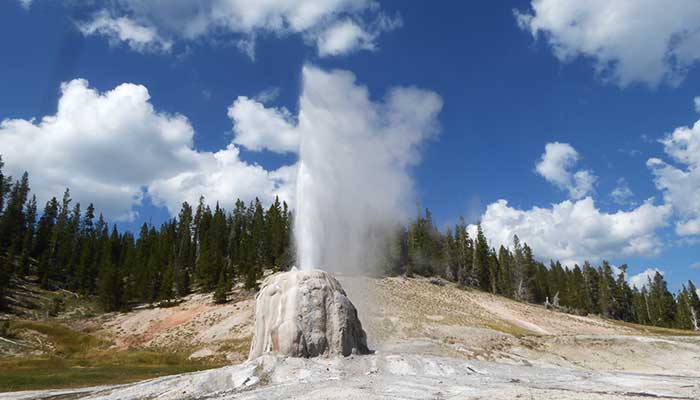 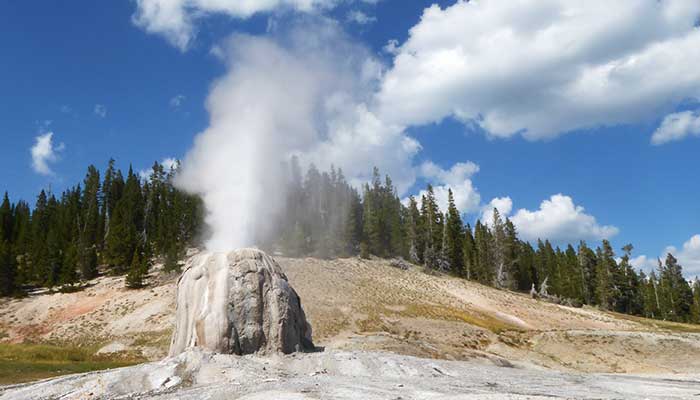 Here is short video of the geyser in action.

We were quite pleased with the timing of our hike. While we missed the first eruption, we were able to see the short, long, and steam phases of the geyser. It was a good day!

We had done everything but run for 2.5 miles going to the geyser so that we could make it in time.  There were no pressures on us to get back to the scooter, so we took our time walking through the forest along the upper portion of the Firehole River.

On one of our first days into the park, we stopped at the Continental Divide to view a distant lake, Lake Shoshone. You can see that sliver of blue beyond the nearer treetops. It seemed very far away. 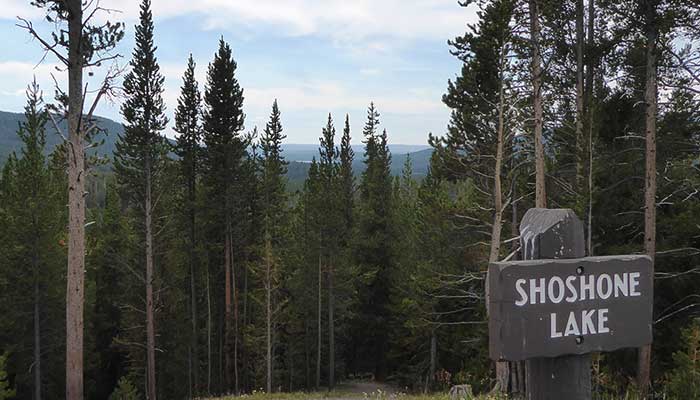 About a month ago, we learned that lake was only 3 miles from the road. Also, there was a ranger led hike to that destination each Saturday at 8 AM. It would mean a cold, early morning scooter ride for us, be we decided this would be great hike to do!

Knowing we were running out of Saturdays (temps have already been in the upper 30's many mornings here) we made last-minute plans to hike this path.

Morning drive in was again spectacular. The sun and shadow played delightfully on the landscape! 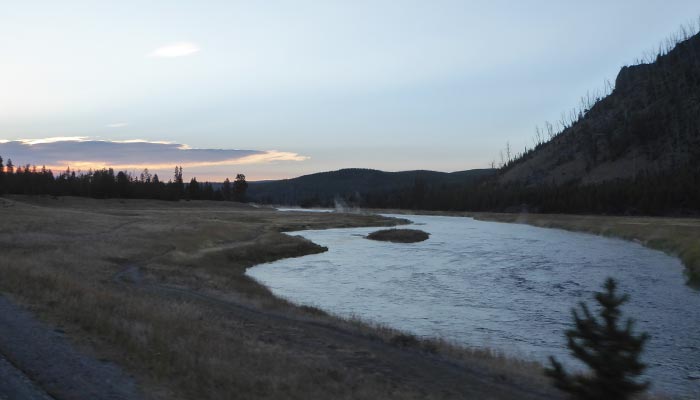 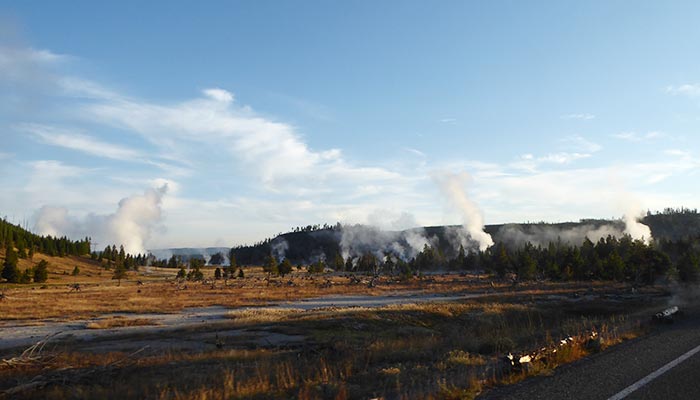 We met near the continental divide, and found a small group ready for a day thorugh that backcountry to the lake. We were quite an international party - three Americans, three Canadians, two Brits, and two ladies from China.

It wasn't a difficult hike, only 150' of elevation change, most of that on the first 1/2 mile. We walked along Delacy Creek the entire way. 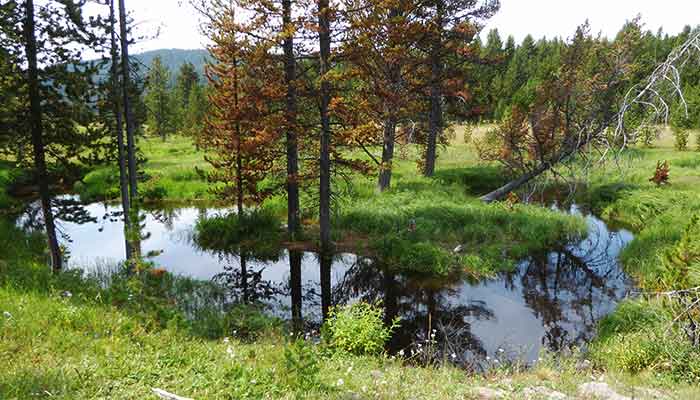 We spotted birds along the creek. Here is a heron sunning itself (it was a cool morning!) 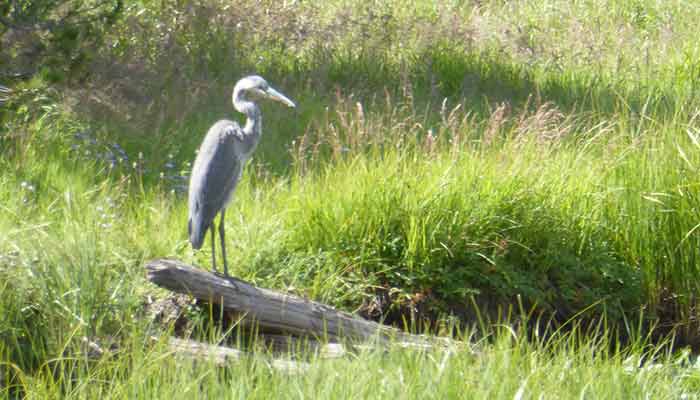 We passed a beaver dam and lodge. Here is a picture of the lodge. We waited outside for Mr. or Mrs. Beaver to show up, but they did not come out. 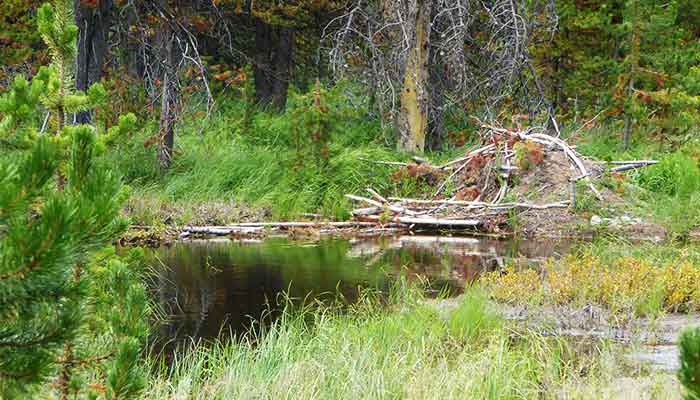 The ranger showed us a decomposing log that had become home to squirrels. She had a name for it, but we can't remember. Look closely and you can see burrowed holes where the squirrels live. There were several fallen logs here with dozens of burrows in each. 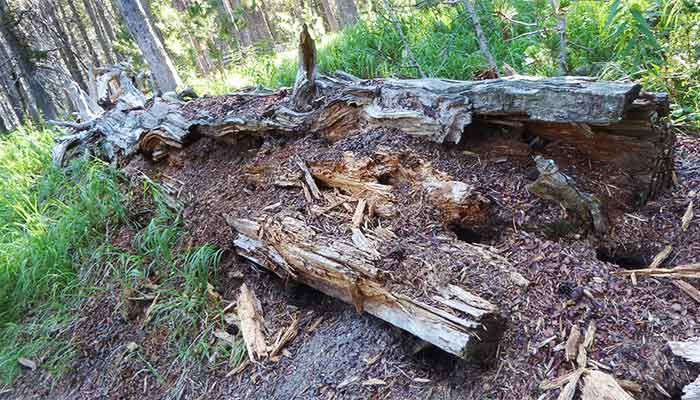 Toward the end of the hike, we got our first view of the lake. 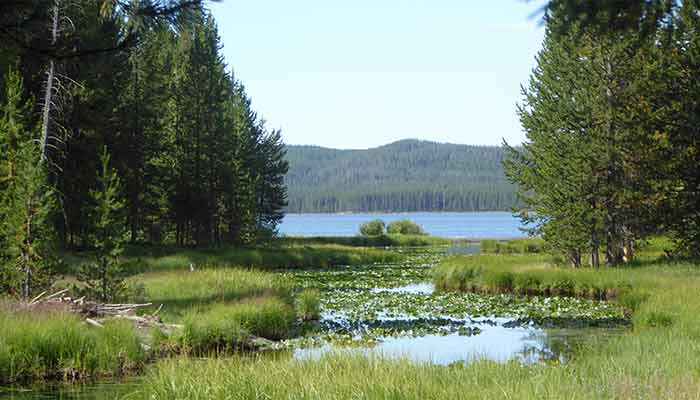 Once we arrived at the lake, we sat down to eat a light lunch along the shore. We loitered here for about a 1/2 hour before heading back. 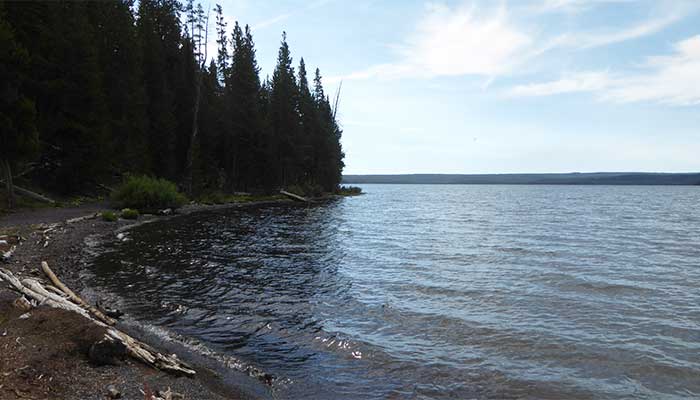 Even though it was an easy hike and we didn't move quickly as a group, we were pretty tired when we got back the scooter. We decided to go home rather than attempt anything else that day.

It was rush hour in Yellowstone and with cars and Bison attempting to share the road (especilly with all the extra visitors for the upcoming eclipse), things can go pretty slow (bison just to the right of the white car). 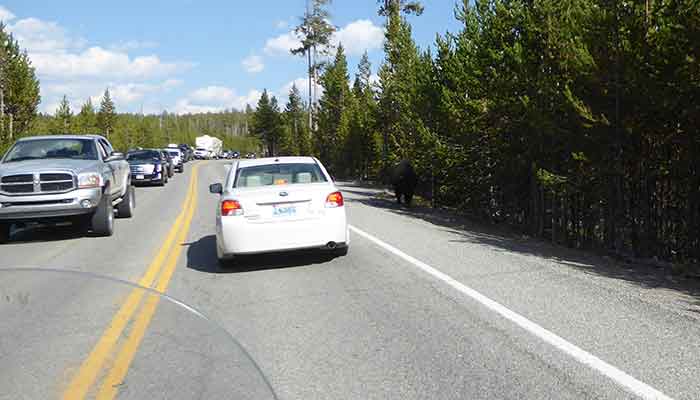 As you can see from the pictures of the past week, the smoke cleared out of the area. The fires are still there, so if the wind shifts, the smoke will return. Still, it was nice to have fresh air to breathe for a while.