While smoke has been in the skies for about a month now, the past two weeks have been the worst. We have cleaned our air conditioner filters each week and they look like they have a month's worth of filth on them with each cleaning. We are thankful for that filtration of our indoor air. What the ac filters don't capture is captured by filters in our own respiratory systems (God's creation is amazing!)

Here is a photo of the mountains across the lake when we first arrived in Idaho. The mountain is six or seven miles away. 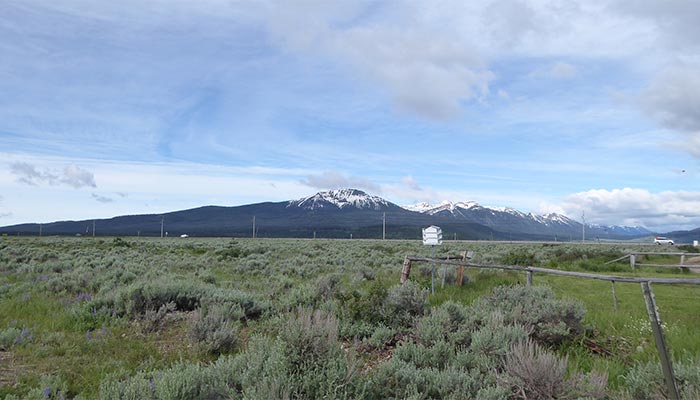 This is the same shot on one of our worst days. There were at least two days worse than this one, but we did not get out to take pictures. 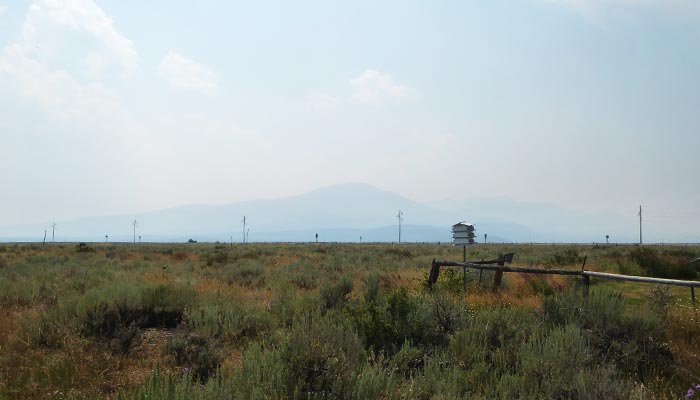 We have an uncle who lives in the midst of some of the fires creating the smoke. Can't imagine what it is like there for him.

Each week we get a little rain here (sure wish it would rain near the fires!) It seems whenever the clouds are thick enough for a good shower, they also send hail. Fortunately, all of our hail has been pretty small. No damage from any of the hailstorms, but they sure are loud! 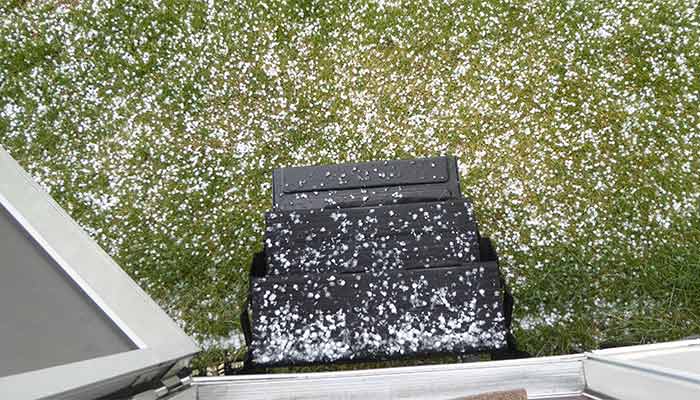 We received a surprise in the mail this month. A friend sent us an electronic door lock. You enter a code to lock and unlock your front door. It also comes with keys as a backup (forgetful owners or battery failure.) It opens and closes better than our previous door. We used to have to hold the latch open to and then release it after the door was closed. Now we just close the door. We are still getting used to a door that actually works! Thanks Gary! 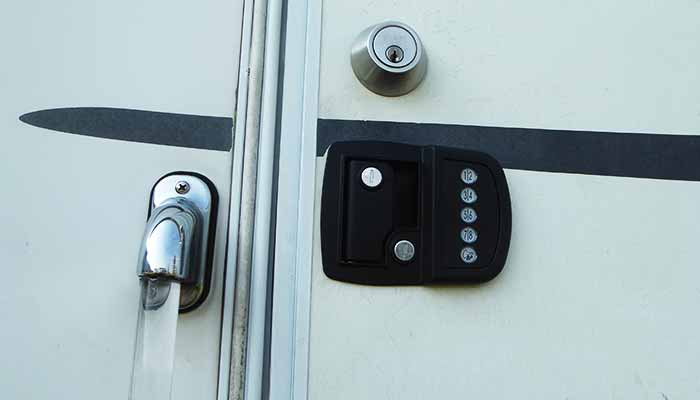 Smoke kept us inside and working most of the last two weeks, but we were able to venture out a couple of times to explore more of the park. We decided to check out a Mounted Shoot Out just on the other side of the pass. It was less than ten miles away, so if the smoke got too irritating, we could get home quickly. Each contestant rode in and around cones shooting balloons. They are judged on time and accuracy. We took a short video (20 sec) of one of the contestants if you are interested. 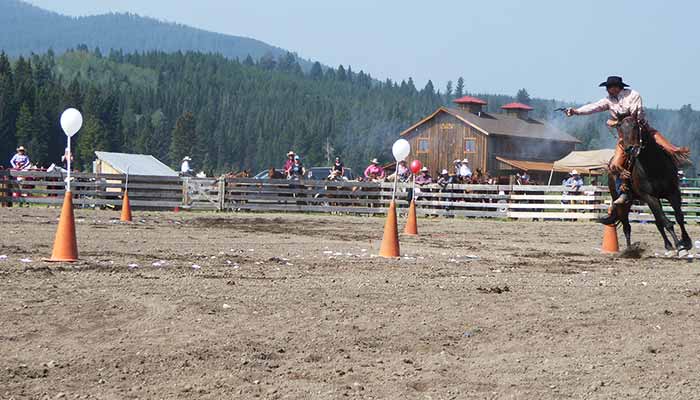 Between each contestant (both cowboys and cowgirls) young men would run out to switch broken balloons for new ones. It was almost as fun to watch them as it was the riders! 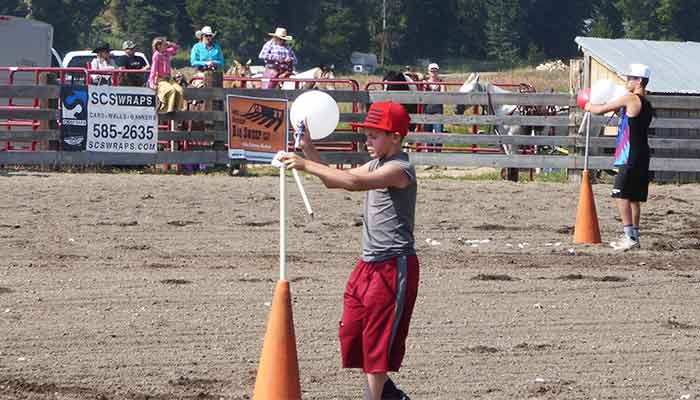 We also attended our second Popup Photo Workshop with Jim Peaco, the park photographer. At this workshop, we met two other couples from our RV park and a third couple from a park a few miles away. 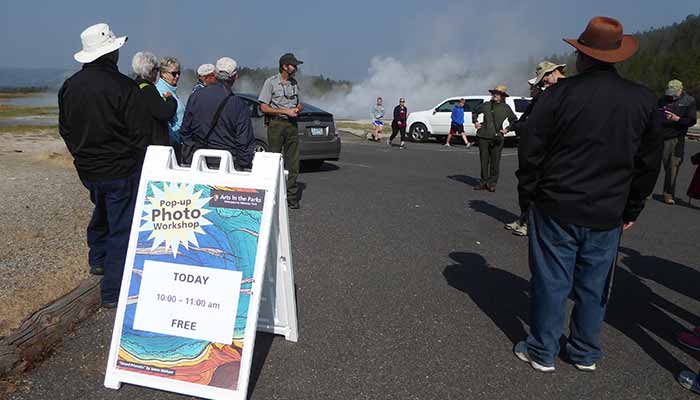 We strolled the boardwalk after our lesson, talking to one of the photographers there, then ran into Jim, the instructor, toward the end of our walk. He remembered us from the last workshop and we stood around and talked about his experiences in the park for quite some time. He has been with the park in some capacity for 30+ years and the variety of jobs he does and has done (besides photography) is quite impressive. Still, he maintains a very quiet, unassuming personality that makes him very easy to like. And what great stories he told... being wolf bait, the quest for lava lamp goo, boating on grand prismatic geyser, helecopter videography during fires (out the side of an open helicopter)... we could have listened all day! It was great to be in an audience of two. We were able to ask many questions and pull more stories out of him.  We tried to encourage him to write a book of some kind about his park experiences, but we don't think he took us seriously. In fact, we know he didn't. After about an hour, he needed to get to his next appointment and we needed to move on also.

We checked out the trailhead of a longer hike we eventually want to do, then decided to see Old Faithful from Observation Point. We had some time before the next eruption, so we visited the visitor's center. We ran in to Jim, the photographer, again and visited for a while in the visitors center. We talked about filming the eclipse and found out we will probably be in the same area of Idaho. Wouldn't it be funny to run into him watching the eclipse?

Time for the next eruption was nearing, so headed out to Observation Point to see the eruption from above. Along the way Susan met a father, daughter, and son walking the same path. The boy, about 10 years old, said he was from England (accent and all) and was enjoying his trip to the states. His father and younger sister rolled thier eyes. "He is from North Carolina just like me" she said. The father explained that they had been studying colonial history and just finished listening to Hamilton, the Musical, on the way to Wyoming. His son had decided that he would rather be British than American. To which the son replied, "I am British!" We think he chose the wrong side. His father and sister agreed.

The view from the Point made the Old Faithful area look smaller. Still the steam plume went high into the sky! It was neat to see Old Faithful from above, but the view from ground is the best - most impressive! 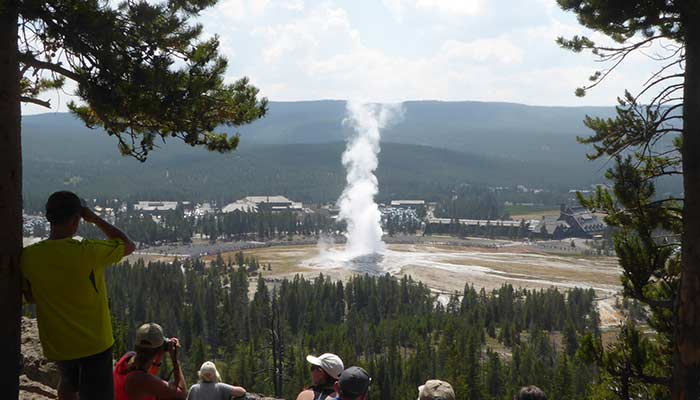 We also took two ranger led hikes. Each of these hikes were in the Mammoth area, so that meant a cold, early morning drive. Here is the sunrise through the smoke on one of those mornings. 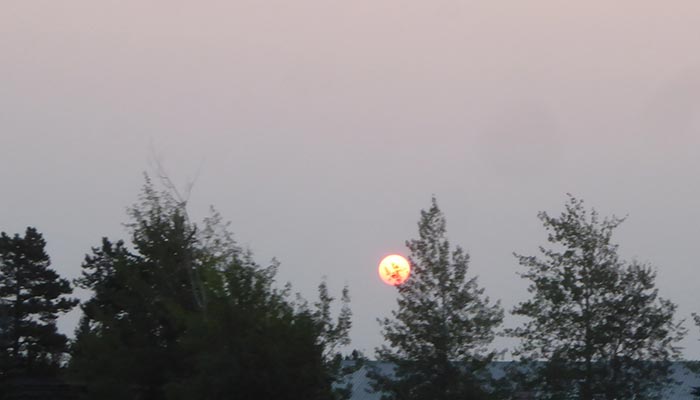 The upper terrace tour took us past many interesting formations. It seems that Mammoth was dryer than it was when we were here two years ago. It was, however, still beautiful. 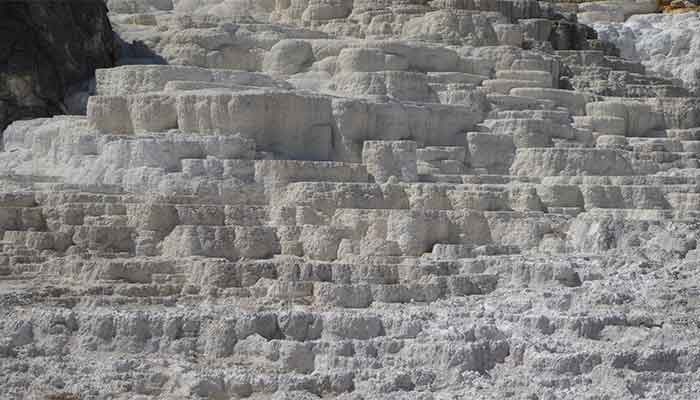 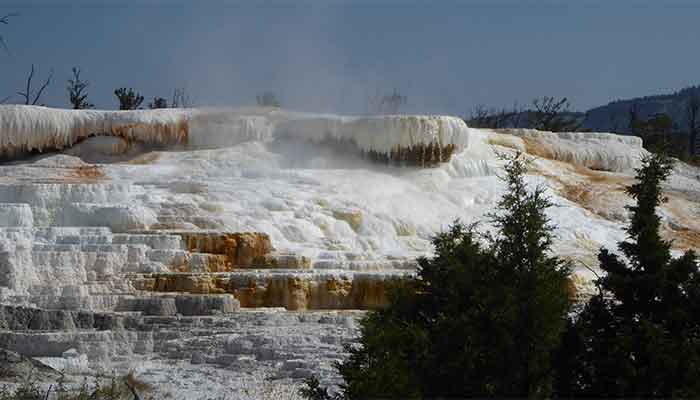 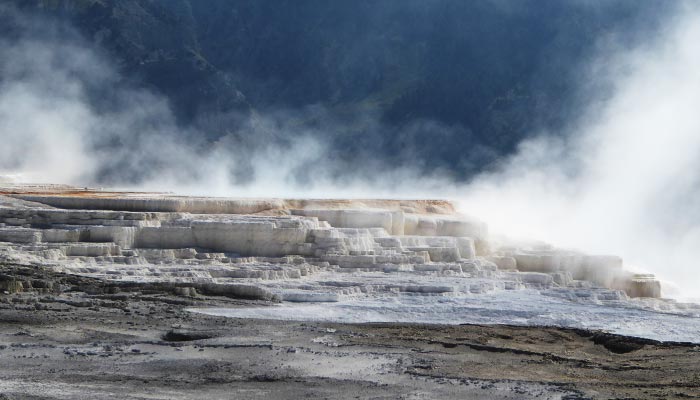 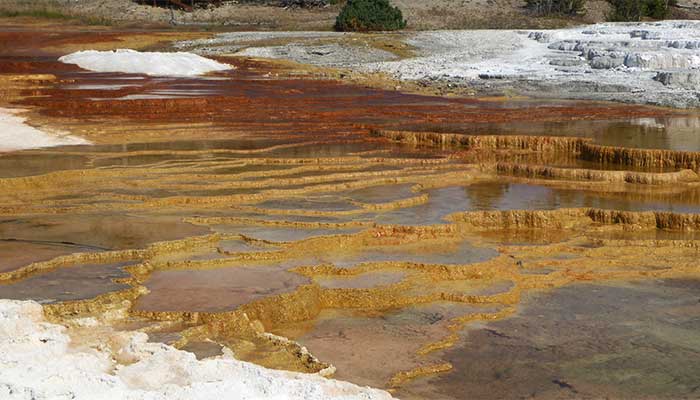 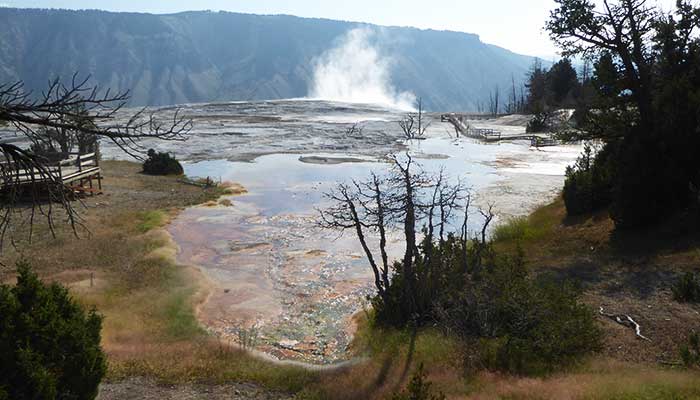 After the Mammoth Terrace Ranger tour, we walked the scenic drive loop back to the car and saw more formations. It was a very nice walk, but we wondered how a circle tour could be uphill the entire time! 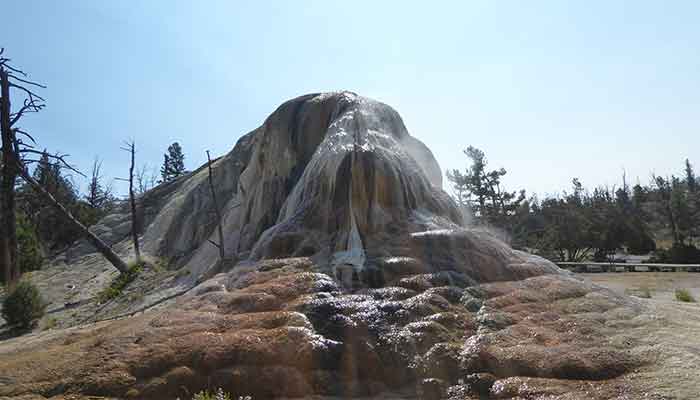 On a different day, we returned for a morning Ranger lead hike to Wraith Falls. Sometimes our Ranger Guides are good, and sometimes they are outstanding. Heather is an outstanding Ranger and a fellow Texan (from Boerne).  She had great explanations about the ecosystem of the park and used the analogy of a house to discuss the characteristics and purpose of each component and how they relate to each other. Here we saw a mule deer eating the house's carpet! 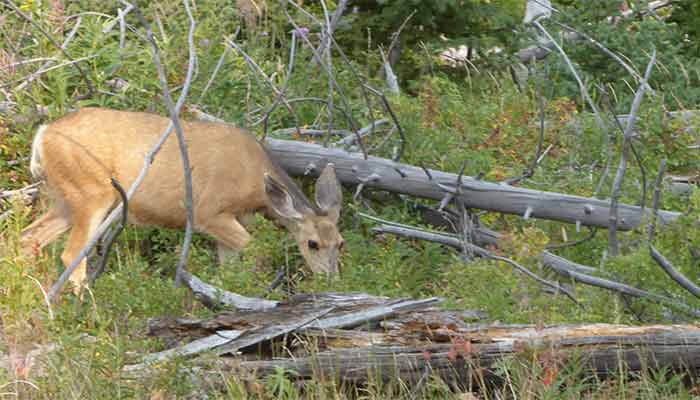 Here she is telling us about the walls, or trees, and showing us how to identify the various types of evergreens found in Yellowstone. 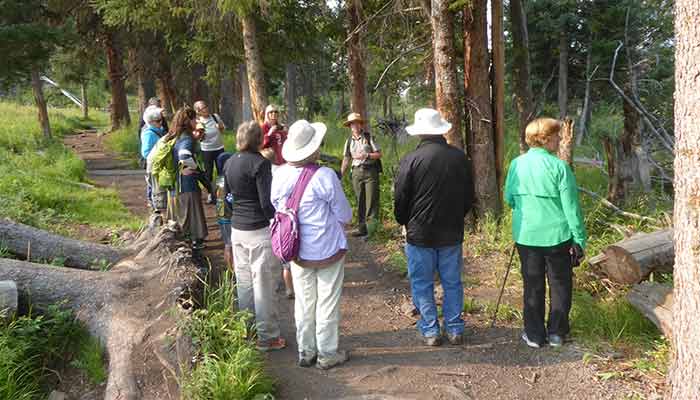 At a small stream, part of Yellowstone's kitchen (where food is stored), she showed us how to find food in the river by turning over rocks and identifying various invertebrates (insects and worms). She even had specimen jars so that the kids could observe their finds without harming the animals. 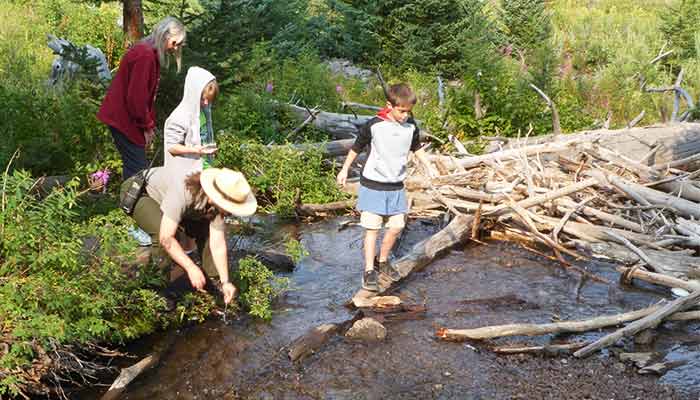 The kids loved getting their hands wet and the adults enjoyed seeing the number of animals hidden under rocks in streams.

We finally arrived at the falls. It was a cascade-type falls where water runs over rocks to the river below. Here you can see how the angle of the sun reflects off the dust in the camera lens. So sad. A different time of day might have provided a better shot. 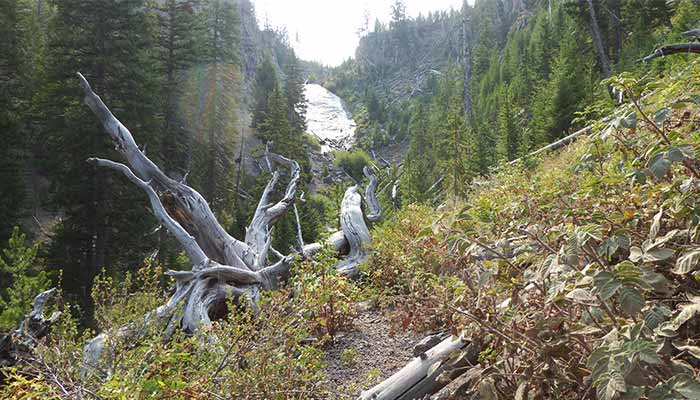 One of the couples from the previous Popup Photography Workshop was also on this hike. We visited with them for quite some time, about traveling, God, and photography. You can check out some of his photos here. They are amazing!

On our drive home, we stopped at a picnic area filled with wildflowers. It was a quiet place to eat lunch and rest a bit from our ride. 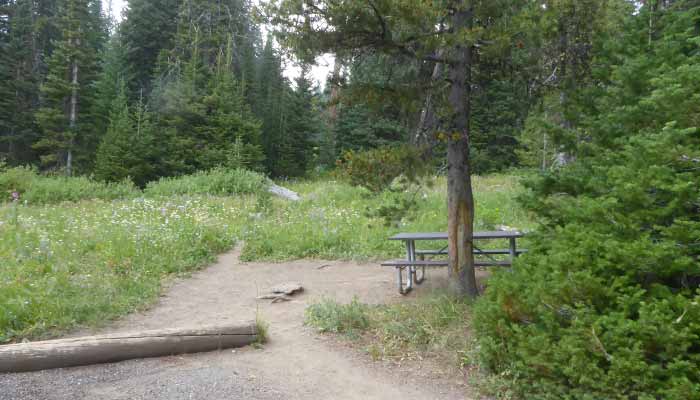 After lunch, we did a quick tour of Artists Paint Pots, another geyser basin. 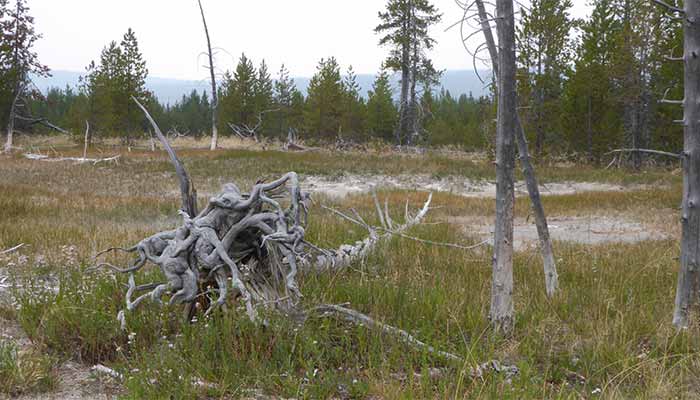 We walked to the overlook to get the view from above. 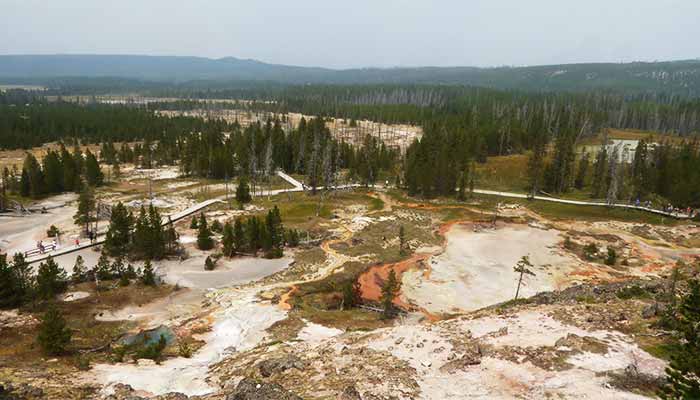 There were mudpots here that happily bubbled and burped. The soud was just as entertaining as the spewing.
Check out our video (10 sec) to see them in action. 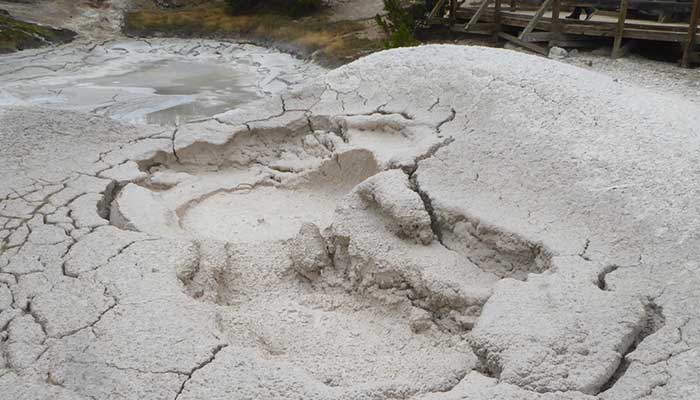 We are continually amazed at how blessed we are to be able to spend some time in such a unique place. We don't think we will every tire of Yellowstone National Park.

He has made the earth by His power;
He has established the world by His wisdom,
And stretched out the heaven by His understanding.
Jeremiah 51.15