While the we were replacing the scooter tire, we discovered that the park opened a new trail we had been anticipating. We had done the boardwalk by the Grand Prismatic Spring, but the new trail is elevated on a nearby hill and has viewing area. Our first excursion on our new tire would be to that trail. While we are grateful to have the truck to drive on occassions when the scooter is down for repairs or not the best alternative (inclimate weather), we love having our scooter back!

On the way, we took a short detour along Firehole Canyon Drive to check out the river again. We stopped along a quiet pullout where we could only hear the river running below. 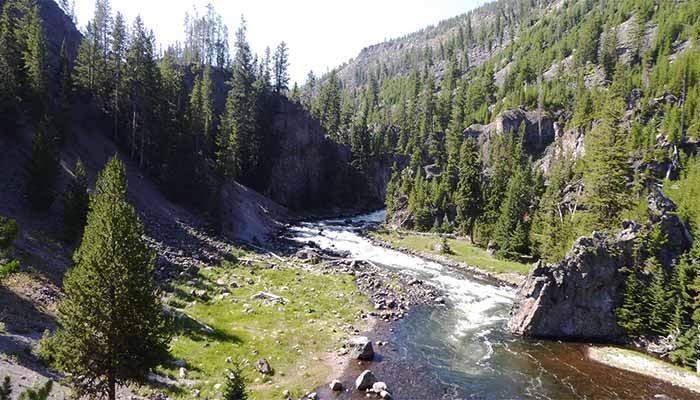 While taking pictures on a cliff above a bend in the river we noticed a large nest on the other side. We tried to zoom in with the camera to see what was in there, but it was difficult to tell with our simple point and shoot. Trey got our our scope  (new aquisition this year) to see if he could get a better view. Can you see the nest in the upper left? 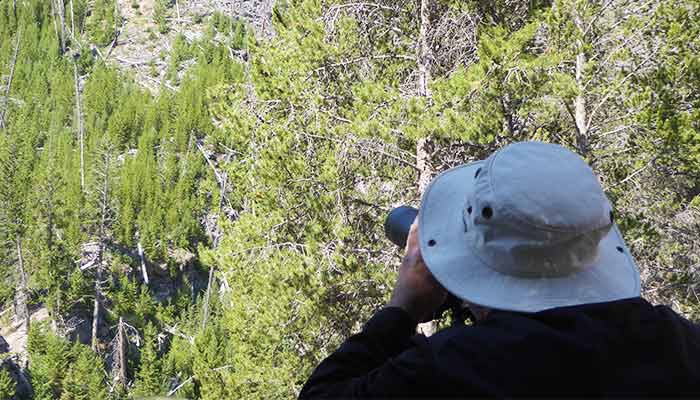 It was a nest with two osprey. The young one kept flapping his wings - try-outs for the big exodus. 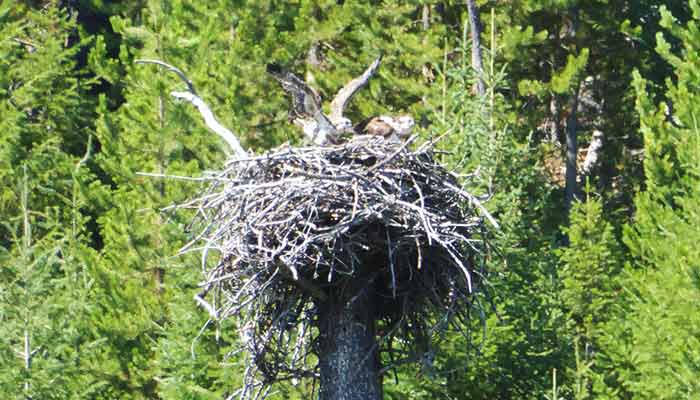 The video we shot is much clearer.

Grand Prismatic was crowded as always and the new trail parking lot was overflowing. We parked on the street. The trail was mostly level and we passed a few sights along the way. 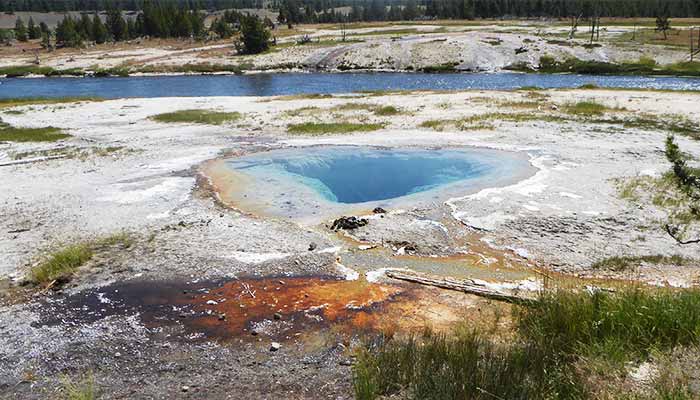 The last part of the trail was a dusty climb to the observation point. The view from up there was much better than the boardwalk below. 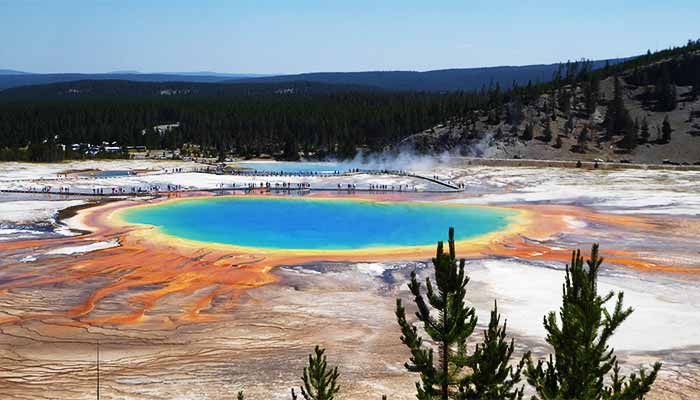 We stood and gazed upon this marvel for a while. Aren't the colors amazing? Who says bacteria are bad? It was difficult to leave. We will return another day, combining this hike with Fairy Falls down below.

We frequently pass this geyser meadow and find it a striking contrast between death and new life. We have since learned that these are called white socks trees. Geysers invade treed areas and the healthy trees begin to absorb the geyser minerals through their roots. This evenutally chokes the tree and turns the base white. 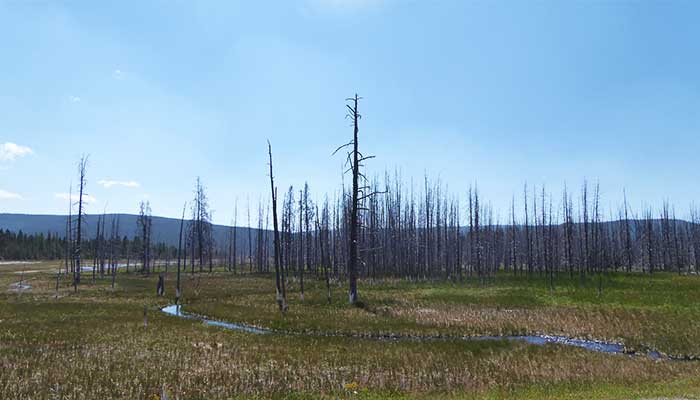 It was lunch time and we decided to see if we could time an Old Faithful eruption with our picnic lunch again. We did! 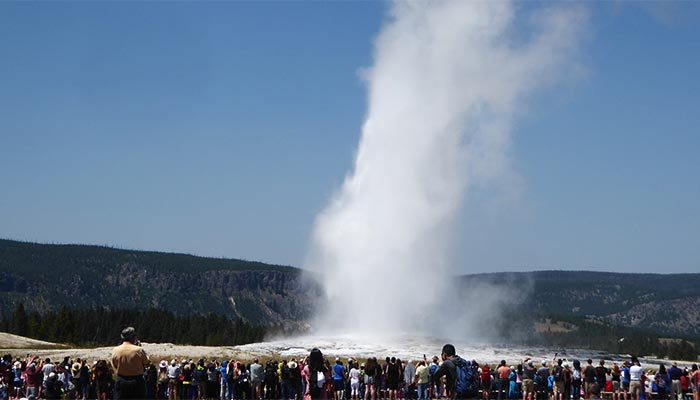 Beautiful! Water shooting up from the ground is pretty cool.

Even the recycle bins at the park are asthetically pleasing. 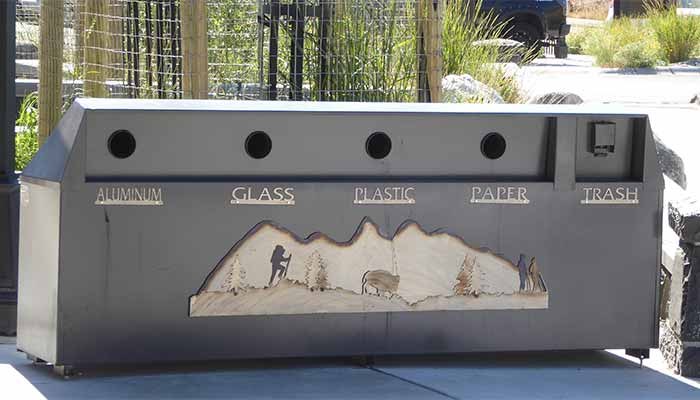 On our drive home, we stopped at the Black Sands Basin and marveled at a few more Springs and geysers. 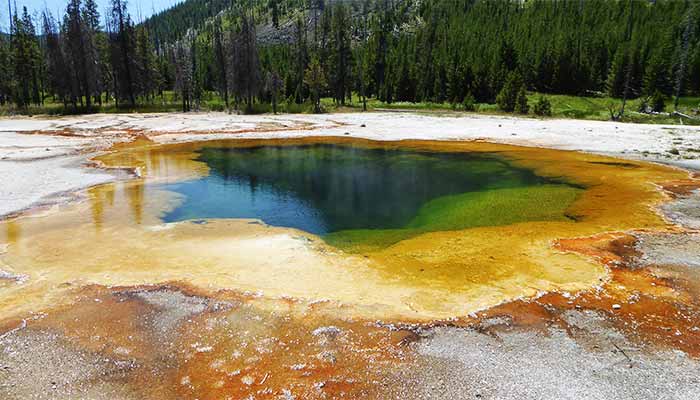 A few days later, we drove over to the Grand Canyon (of Yellowstone) to walk the South Rim Trail. We saw on the park website a month ago that the North Rim Trail was closed due to construction, so we knew our choices were limited. What we didn't realize was that the South Rim Trail closed for construction to begin after we checked the website. Now our choices were even more limited. We decided we would check out Artist Point and see the Lower Falls on the Yellowstone River.

It was getting late and the parking lot was crowded, so we parked the scooter, sat on the curb and ate a quick lunch. Just as we began to chow down on eggs, lunch meat, cheese, and fruit, a tour bus unloaded right in front of us (not an oficial drop-off spot). People had no choice but to walk in between our scooter and the vehicle parked in front of us, twelve inches from our secluded picnic! 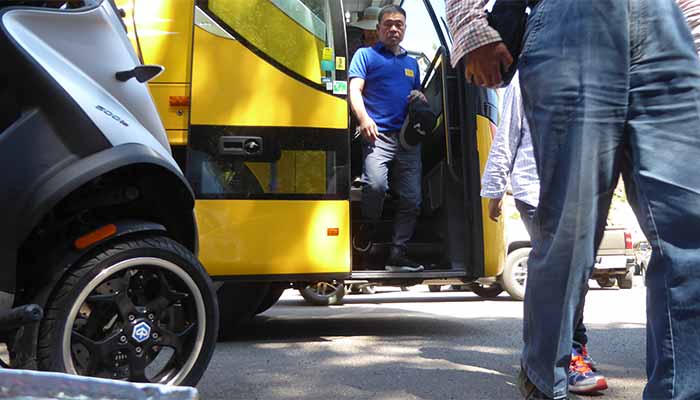 The driver may not have seen us as he pulled up, but he looked right at us before he stopped the bus and opened the door. We could do nothing but laugh at the situation - again.

The walk that was open was crowded (we had a hint it would be from the parking lot) but the view was beautiful. This is a shot down the Grand Canyon of the Yellowstone, away from the falls. In the distance you may be able to see the crane on the high cliff working on a remodel of inspiration point. 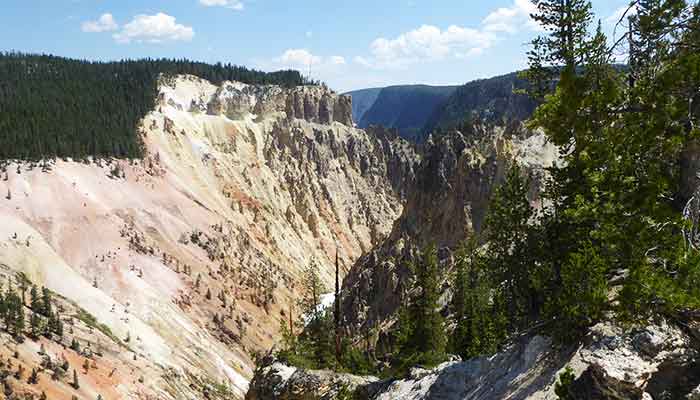 Facing the other direction, you can see the Lower Falls. 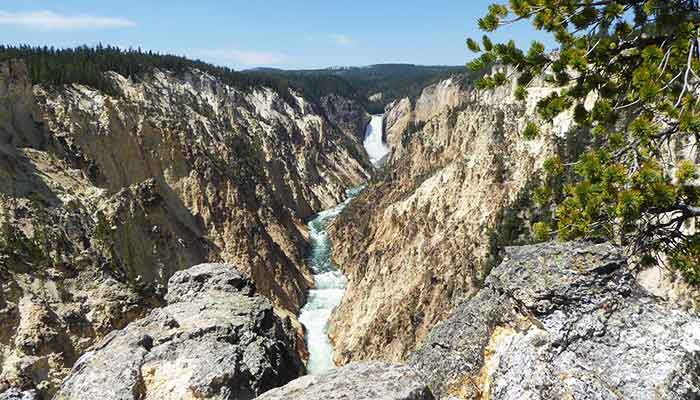 This shot tells you why this was named Artist's Point. He was actully pretty good! 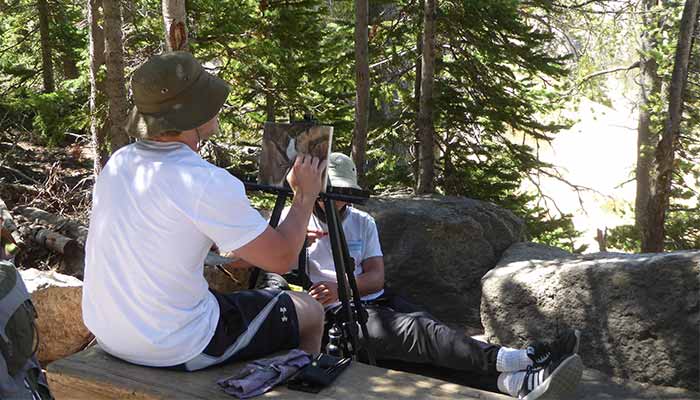 After Artist's Point, we visited the Brink of the Upper Falls. This spot is not visible in the Lower Falls picture above, but is the smaller Upper Falls waterfall. 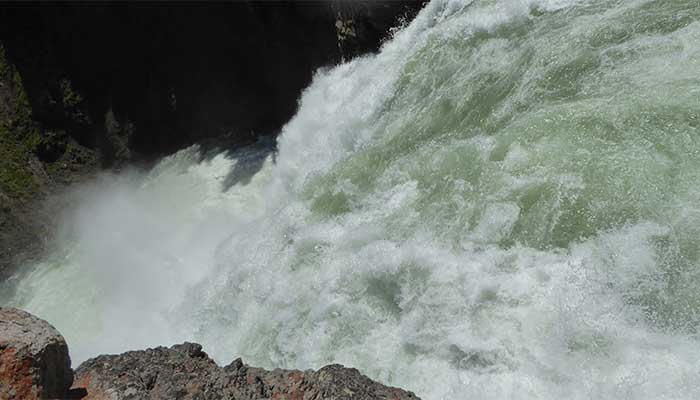 Although crowded, we stayed here a while watching the powerful river and listening to it's mighty roar. 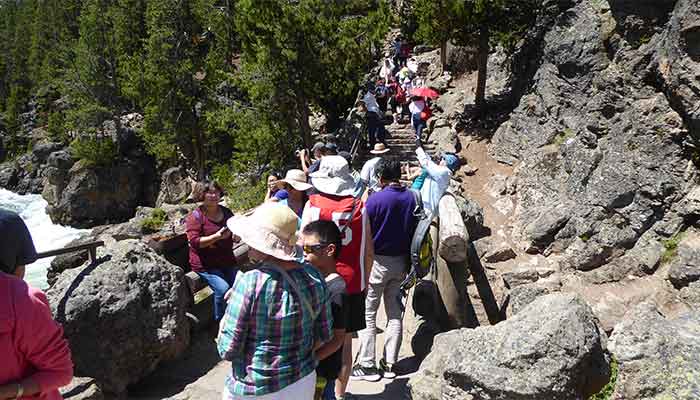 We took a pitstop near the Yellowstone River and you can see the bridge that takes you to the overlook. Just past the bridge and a quick bend in the river is the brink of the upper falls. 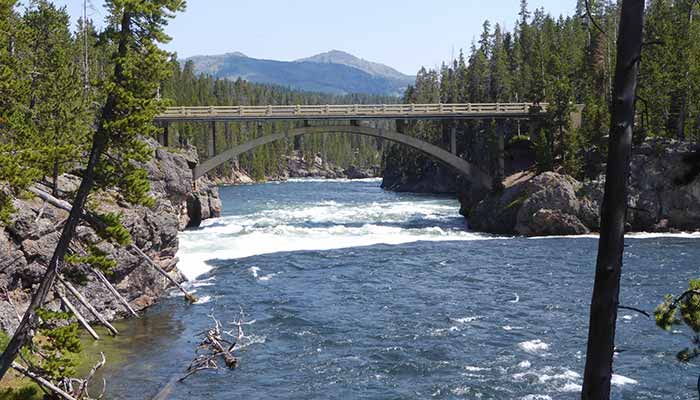 On the way home, we saw a bison bedding down to prepare for the heat of the afternoon. 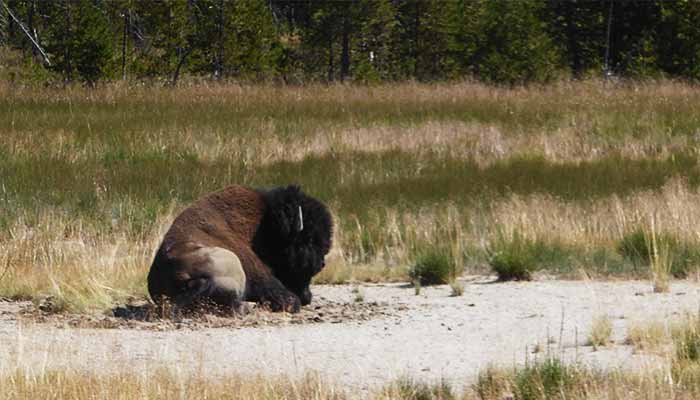 We are still trying to get a picture of a bison giving itself a dust bath. That is neat to see!

... because what may be known of God is manifest in them,
for God has shown it to them.
For since the creation of the world His invisible attributes are clearly seen,
being understood by the things that are made,
even His eternal power and Godhead,
so that they are without excuse,
because, although they knew God, they did not glorify Him as God,
nor were thankful,
but became futile in their thoughts,
and their foolish hearts were darkened.
Romans 1.19-21