As we mentioned previously, our scooter tire was loosing tread quickly. We had the front two tires replaced in June and asked about the rear. We were told it should be fine. We had been watching it, checking at least weekly for wear and it seems the tire went bald overnight. The wear is very clear in this picture. We've ridden on gravel and some rough roads and know that this accelerated the wear. 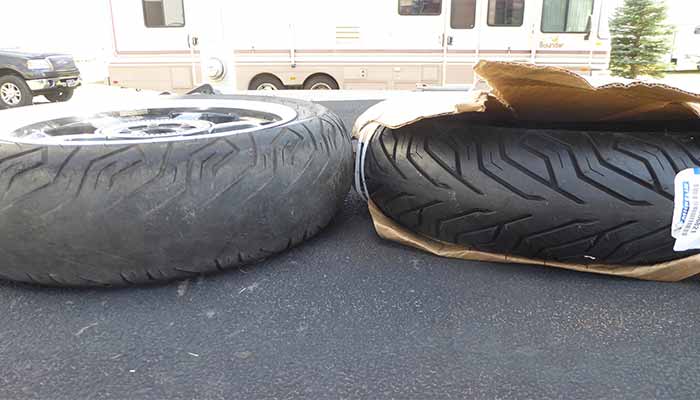 Since scooter shops charge by the hour and the exhaust system and other components must be removed to replace the rear tire, Trey decided to replace it himself. Last fall, Doug (AKA Old as Dirt) showed him how to do most regular maintenance and there were some great YouTube videos on the subject so it shouldn't be a problem. It took a week for our tire to arrive, then we had to take the rim and tire to the nearest tire shop (90 miles away) to get it mounted and balanced.

Tuesday evening, Trey removed the wheel in so that he could mount it after we got back Wednesday.

We left early the next morning so that we could drop the wheel off when the shop opened.

The air was extra clear that morning and we got more views of the Tetons as we drove. We normally don't see them until the other side of the mountains, but this morning we saw them from the RV park. We stopped at a state park along the way to get a few shots. Here are the Tetons from outside of Island Park. 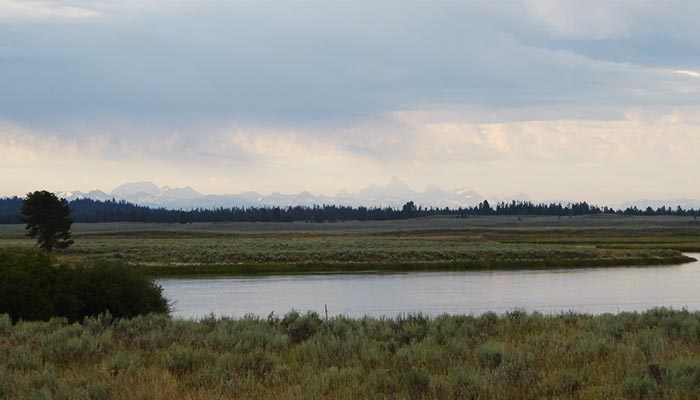 Here is another shot of the sun's rays playing with the gathering storm clouds. 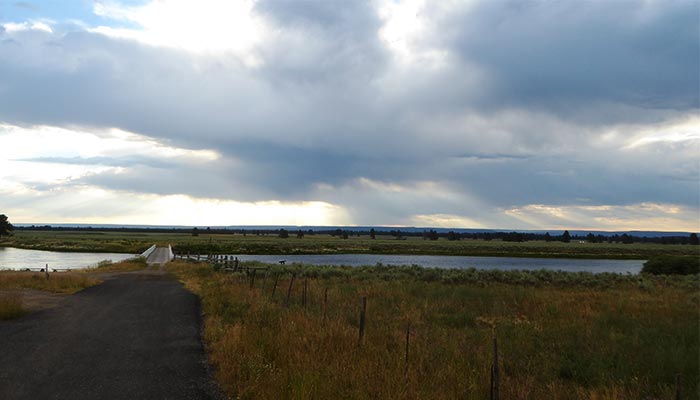 While in the big city, we ran errands and stocked up on more fresh fruit. It took four hours for them to mount and balance our little scooter tire. The guy at the counter kinda scolded us for not having an appointment. However, we called two days before and were told to bring it in and they would get it done - no problem. The long drive, the wait time at the shop, and the cost to mount and balance one tire helped us decide to buy the equipment to do it all ourselves. (Correction: for Trey to do it all by himself!) The cost of getting the front tires replaced and the rear tire mounted and balanced would have almost paid for the equipment to do it all. With the front tires needing to be replaced twice a year, and the rear tire annually, it will be well worth the cost.

With our newly mounted tire in hand, we headed home. The drive home from Idaho Falls to Island Park was just as nice as the drive up.

Island park has a population of 272. Yet, it's main street is 20 miles long. You can see on the map to the left the outline of the city limits and where we are: the blue dot. From our RV Campground to the other end of the town is 20 miles. 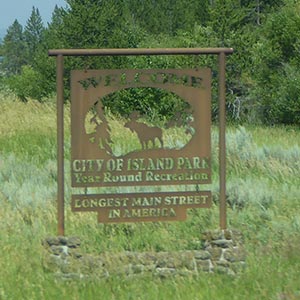 We returned home and Trey remounted the wheel without issue. A quick test run reassured us we were ready to roll again.