We thought the worst of the spring rains had passed and we looked forward to some longer trips into Yellowtone. Except for our trip to the Tetons, most of our excursions were 3 - 5 hour trips to avoid morning or afternoon rains.

We were mistaken (once again!) The picture below was taken from directly behind our trailer looking ESE. 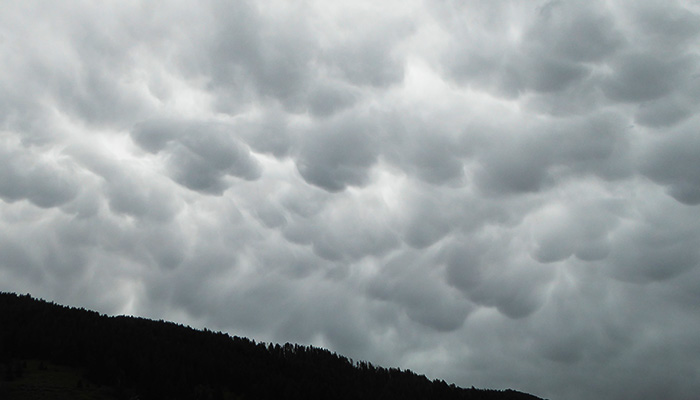 This photo was taken by turning around and looking NW. We weren't going anywhere soon. 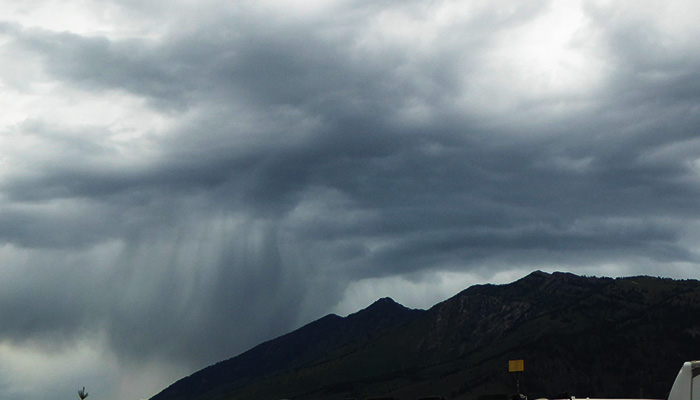 To be honest, waiting out rains wasn't that big of an issue. We had plently of work to do and we were still recovering from our colds - these cold had effects that lingered long! We tried to take advantage of the cold, wet days by remaining indoors and working.

Less than a week later, we saw the weather forecast for less than 10% chance of rain over the entire Yellowstone area. We desperately wanted to look at something other than the computer screen and decided a quick trip into the park was worth the low risk of rain. We stopped to sit along the Madison river and saw the sky was clear and it was a beautiful day. 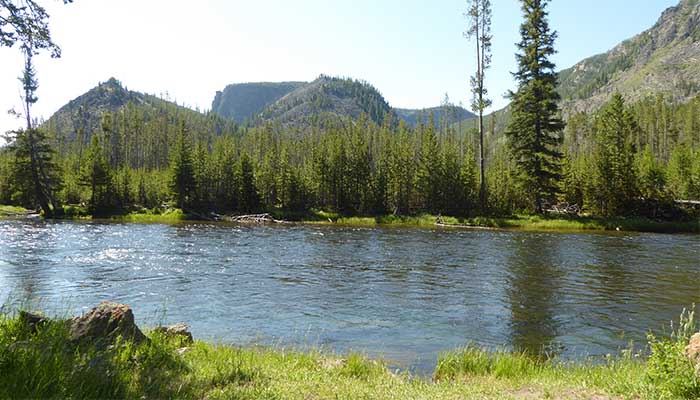 At that point, we decided to visit Cooke City, MT and eat a late lunch at Cafe Cooke, a small roadside eatery with made from scratch food. Cooke City was several hours away, so we knew it would be a long drive, but we were excited to be outside.

Along the way we passed amazing vistas. 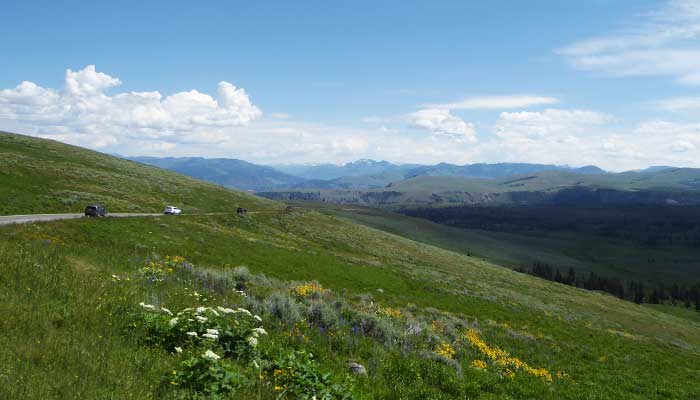 We had an excellent view of the Yellowstone River near Tower Falls. 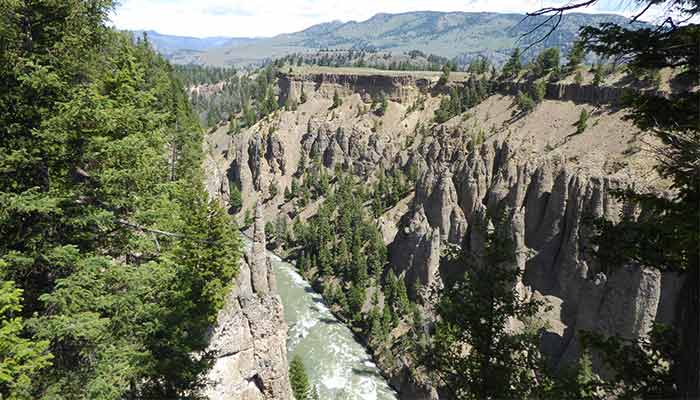 We drove through Lamar Valley and as always, saw hundreds of bison. Most groups were too far away for a good picture, but the scene is pretty enough on it's own. 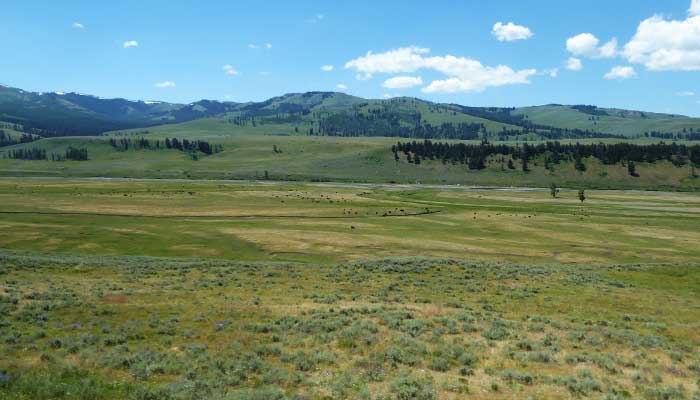 Farther up the valley, we drove along Soda Butte Creek. 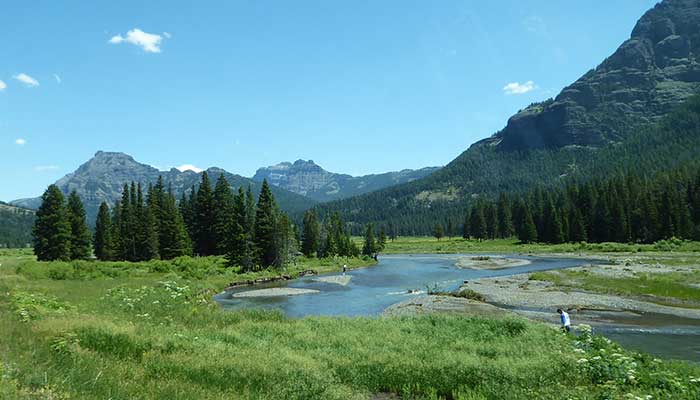 We finally made to Cooke City and ate delicious burgers (no photos). It had been a beautiful day and the weather could not have been more perfect!

As we were about to head back home, we noticed a few clouds behind the mountains. Having no access to the internet, we went to the visitor's center to check on radar. There were numerous scattered thunderstorms between us and home. It didn't look as though we could miss all of them. We didn't think we would be in the  park more than a couple of hours so we left most of our weather gear at home. Poor planning. We tried to figure out the best time to head back and figured sooner was better than later.

As we came out of the mountains and got our first glimpse of the Lamar Valley again, it looked forboding. We knew there was a gas station at Tower Junction just passed the valley and we hoped we could make it there before the heavy rains hit. It was about a quarter of the way home. 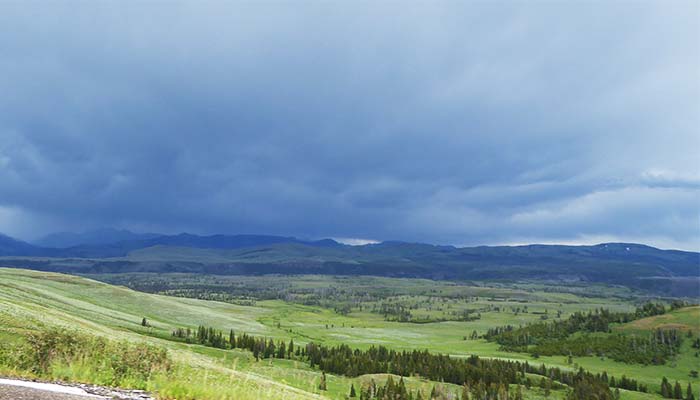 We felt a few drops here and there, but remained mostly dry for the first part of the drive. About the  time the skies began to drizzle more heavily, we came to a stop at a bison traffic jam. Those folks ahead of us are driving slowly and leisurely viewing local bison from a warm, dry car. We were getting wet. The rain was getting heavier. 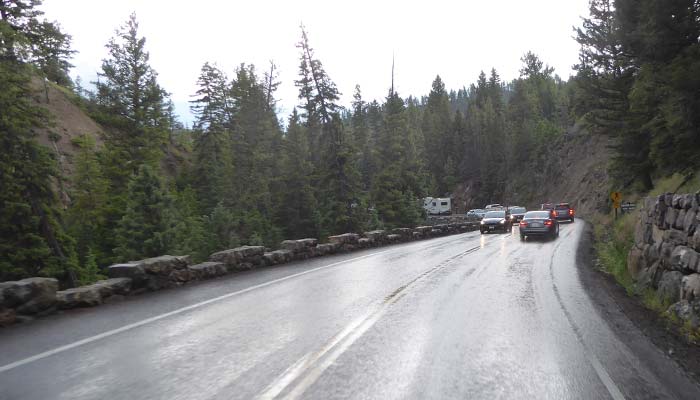 Compared to most bison jams we encounter this one was a rather short delay, thankfully, and we made it to the gas station before the thunderstorm really hit. We could have gotten much wetter!

We parked our bike and took cover with about a dozen other bikers under the fuel pump canopies. We began a conversation with a couple who spend each fall in Sturgis, SD at Bike Week. They work with a ministry that washes bikes for free. While washing the bikes, they talk to the riders and tell them about God, find out what their needs are, and pray for them. They've been doing this for about six years and love it. What a great ministry! The body of Christ is amazing to behold.

We were at the gas station for almost an hour when the rain slowed, then stopped. The skies toward home had pockets of blue and we decided to see if we could make it the rest of the way without getting soaked. We still had a couple of hours of driving to go. 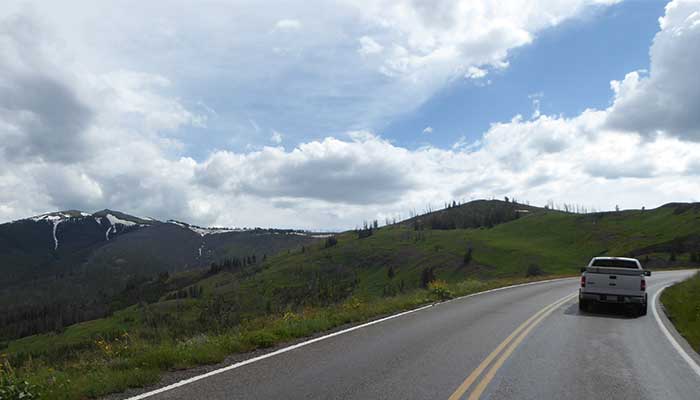 To our amazement, the remainder of the trip through the park was relatively dry and we saw no thunder, lightening, rain (or hail).  Once in West Yellowstone, we checked the weather again and determined that if we didn't stop in town, we might make it home before the next thunderstorm hit. About ten minutes after we walked in the trailer, the last thunderstorm of the evening erupted. We felt blessed!

Sing to the Lord with thanksgiving;
Sing praises on the harp to our God,
Who covers the heavens with clouds,
Who prepares rain for the earth,
Who makes grass to grow on the mountains.
Psalm 147:7–8