We left Utah and headed north. We had two days to fill before we could arrive at the RV park near West Yellowstone, so we decided to take some time driving through Idaho. One stop that looked interesting was the city of Pocatello. Never heard of it? Neither had we. It is the home of Idaho State University, Tastee Treet, the largest small-city cemetery we'd ever seen, and the Museum of Clean. Sounded like a great place to pass the time!

With the threat of afternoon rain looming overhead, we we headed out on foot. The farthest place we planned to visit was just a mile and a half away, so we decided to spend the day on foot (with an umbrella). The cemetery was right next to the RV park, we walked through it, rather than on the streets. It was a beautiful cemetery with large trees and very green grass. 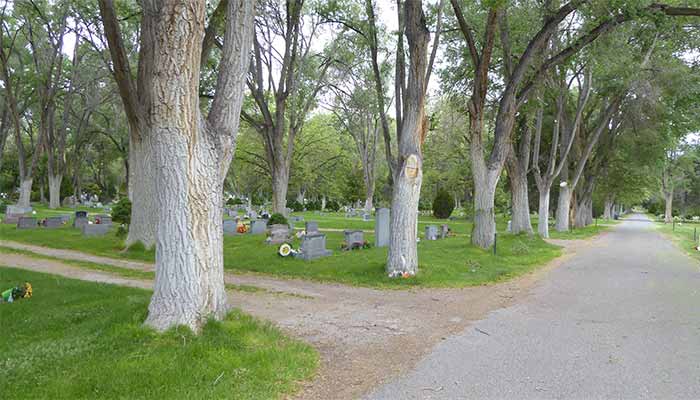 It was an interesting place. Many of the markers had planters suspended above. We speculated on the reason and decided it must be to keep the flowers above the snow. Seemed as good a reason as any to us Texas folk. 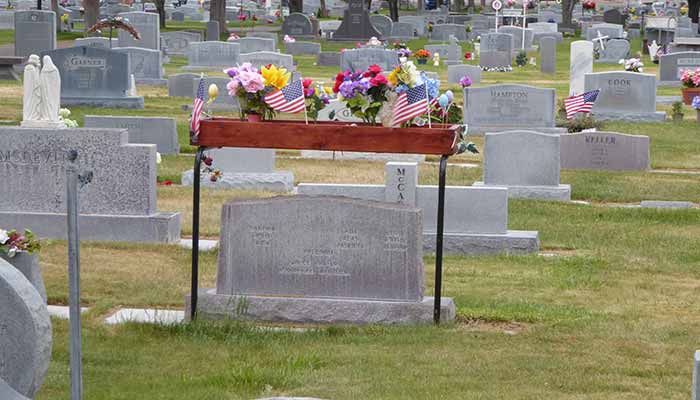 There was a row of markers in front that hinted at a tragic tale. It seems one woman buried her husband, then a few years later buried her son, daughter-in-law, and two grandsons on the same day. We don't know the details of this tragedy, but the memorials here indicated a great loss. We loved the memorials for the 2 boys: Legos for the younger boy and a combination roller-coaster and Rubik's Cube for the teenager. What a loving tribute. 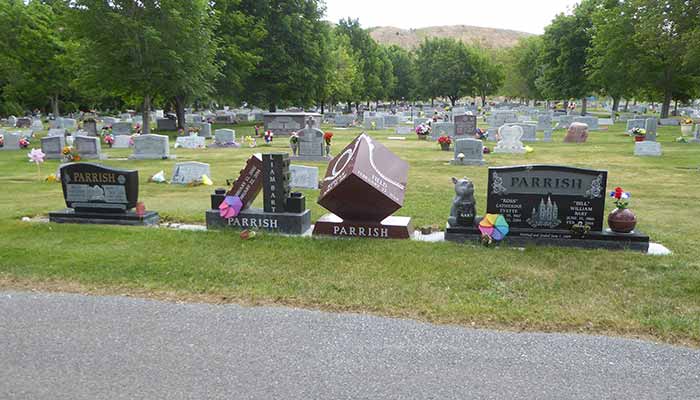 We walked for almost a mile in the cemetery, then went out onto the streets.  We made our way to the Museum of Clean. 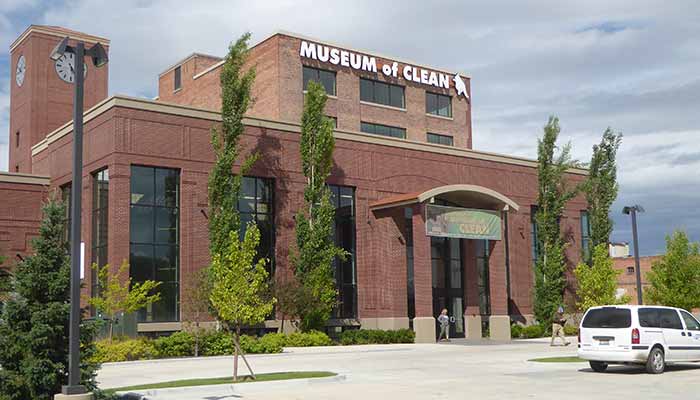 What a fantastic place! Don Aslett made numerous television appearances in the 1980's and beyond talking about cleaning and de-cluttering before all the cable channels made big money off such things with reality TV. You can read his story on the website. 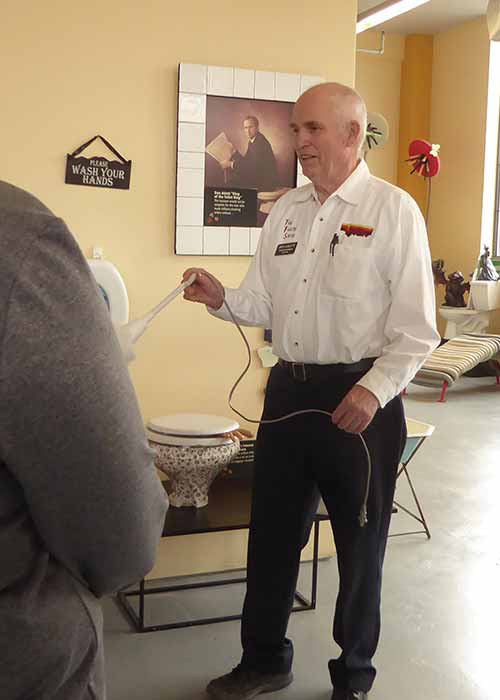 We arrived shortly after a tour began and they escorted us to Don and a small group of people he was showing around. Cool! We got our tour from the creator of the museum! He knew pretty much everything about everything in the museum and had a story to go with each item. Quite often, these stories were true as Don jokingly informed us! It was a small group and there was a lot of playful interaction between Don and the visitors. By the end of the tour, he called Trey "a quiet one, but very smart."

There were many unique and antique cleaning items and many stories, but we thought we'd just share our favorite here. Below is a Moto-Vac Cleaner. It is an ingenious way to clean your car interior. You attach one end of the hose to your exhaust, start your engine, and use the other end to blow debris out of your car. 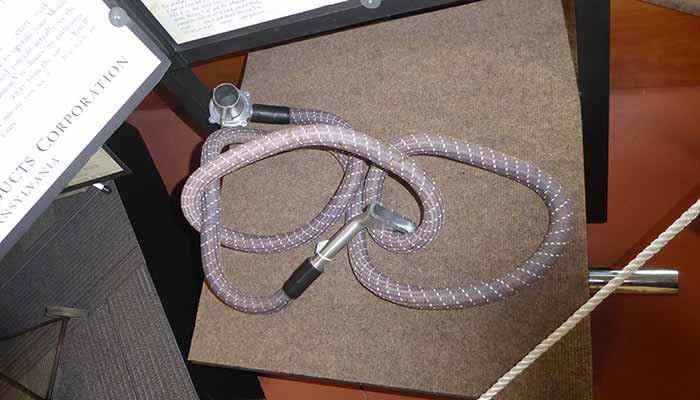 No, seriously, they had pictures and instructions and everything! See the sweet little girl helping her mother? 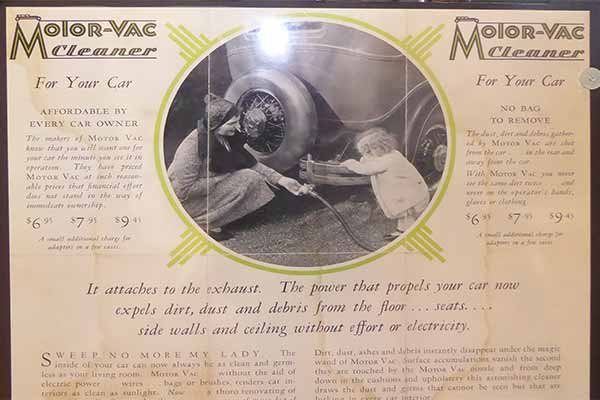 Wonder why this never took off?

There were four floors of clean (everything from dentist tools to lawn equipment and more) and we spent a couple of hours reading and laughing at what we saw. When we got back to the lobby, Don walked up and asked us if we wanted to get the first part of the tour we missed out on. Sounded great to us! Such a charming man and such an interesting place. If you are ever in SE Idaho, don't miss this stop!

The following day, we drove through Idaho Falls and Rexburg. These would be the closest large cities to us during our summer stay near Yellowstone and we wanted to do a last-minute shopping trip and check out the area. We located the stores we might need and found a food truck claiming to have the world's best corn dogs. We had eaten at the Cozy Dog in Springfield, IL multiple times and seriously doubted the validity of this claim, as explorers and lovers of corn dogs, we felt that this claim needed to be tested. 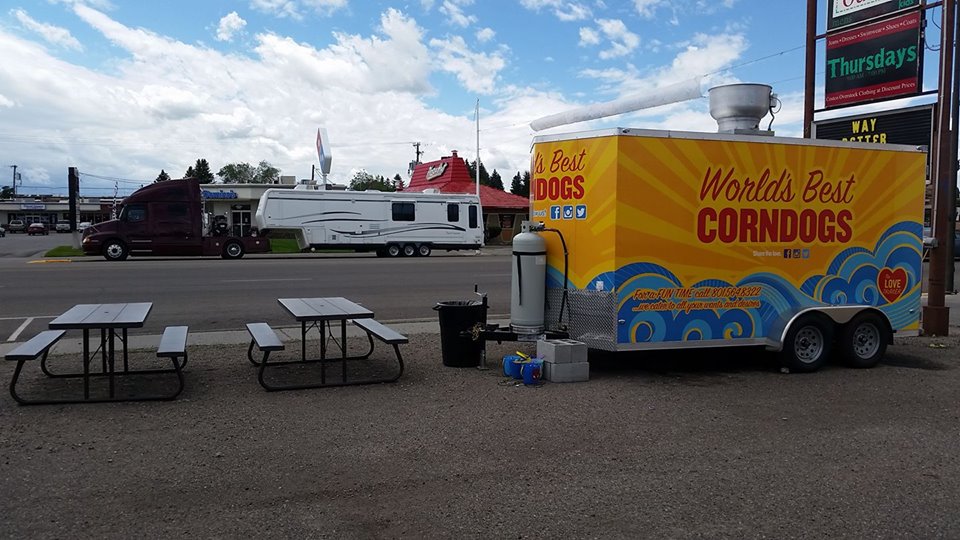 Fortunately we found parking right across the street (see us?) so we didn't really have any trouble getting there. We ordered two dogs and took them home to try (it was cold and windy). We didn't think it could be done, but we believe these dogs are as good or better than the Cozy Dogs we had in Springfield. They were fresh, hot, and the breading, though mildly sweet, was very corny. The dogs they used were excellent and made this a meal to look forward to when we return to the big city. The eclipse passes right over this town, so we know we will be back here at least once.

After that, we drove on to our home for the summer near Island Park, ID. We are staying 15 miles from the West Entrance to Yellowstone National Park. The first week we were here, it was cold and rainy, so we didn't venture too far, we mostly stayed home and worked. We made a trip or two into West Yellowstone (the town) and checked out the grocery stores there. We also had a snow day in June! 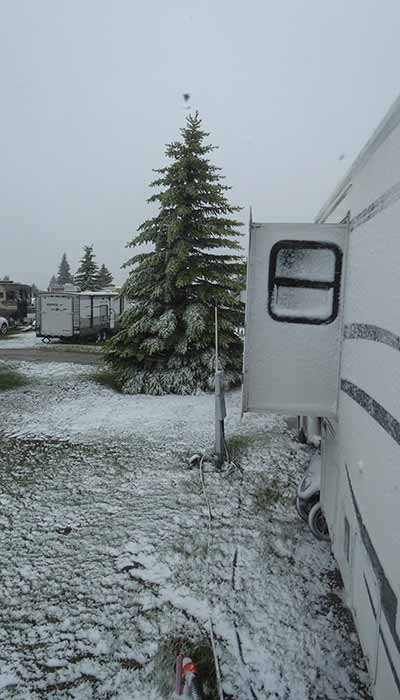 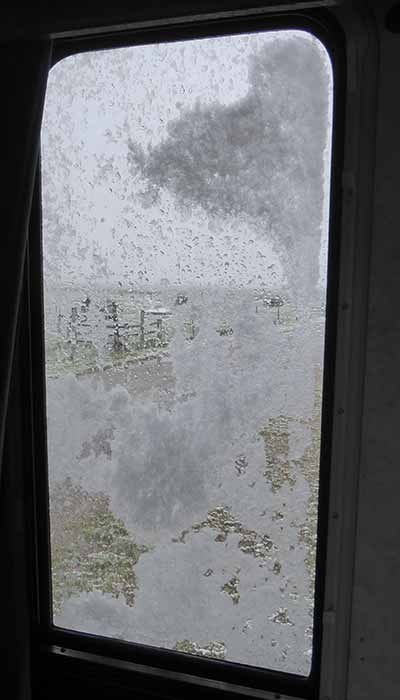 It snowed all morning until about noon. It was all melted by 2 PM because the temps never got to freezing. It was pretty while it lasted, and fun to watch.

The rain and clouds were pretty much gone by the end of the week and we took our first tours of the National Park. We will save that for our next post.