It is difficult to pick a favorite place here in the southwest, but Zion National Park is pretty special. We'll try not to repeat ourselves, but you can see our 2015 trip to Zion here.

While there, we revisited our favorite places. We love seeing The Watchman. 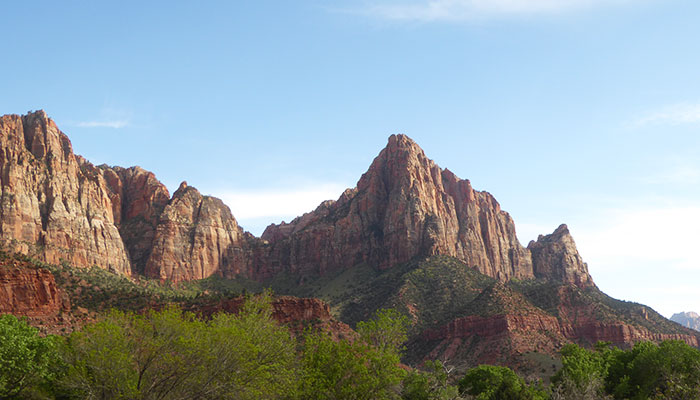 We also took a little time in the Court of the Patriarchs. You can see Abraham, Isaac, and part of Jacob. While there, we met an 11 year old boy, Alex, who was there with his dad and could not understand why there were only three of the four peaks named for Patriarchs. He was quite adamant. He thought the fourth peak should be named after another patriarch, not some random title. Trey explained that the Patriarchs were from the Bible and there were three of them. We asked what he would name the fourth peak if he could, and we eventually decided that it should be "Mount Alex". That seemed to please everyone. 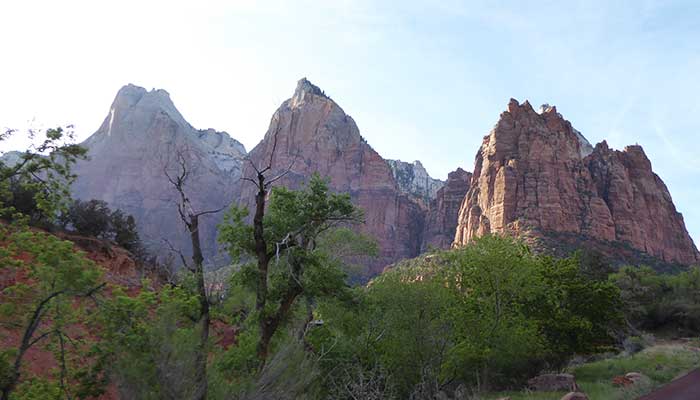 We saw several climbers on the high cliffs. Look closely for a white dot about two-thirds the way down. He was later joined by a friend. 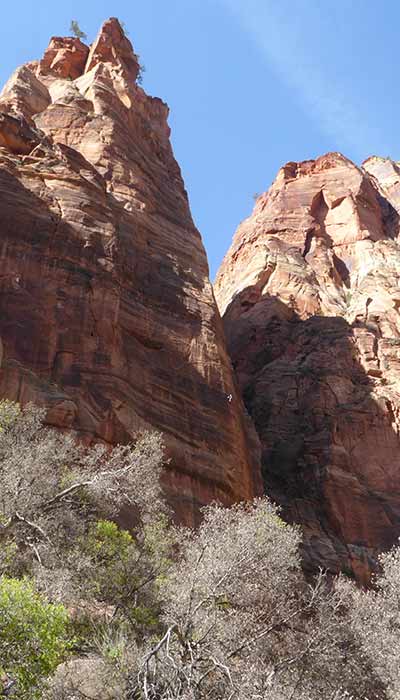 Angel's Landing is a strenuous hike at Zion that Chris, our brother in law, hiked several years ago. It is a 5+ mile hike that takes you up over 1,500 feet. His story about this hike was intriguing. We talked about trying this hike several weeks ago. Since that time, Susan's foot and Trey's back had caused some pain. Also, we were pretty worn out from the last two weeks so we went off the idea of that particular hike.

We did a few short walks. This particular walk followed the river around the base of Angel's Landing. We decided to call it "Fallen Angels Path". It was a pleasant stroll and a nice, quiet way to spend some time. 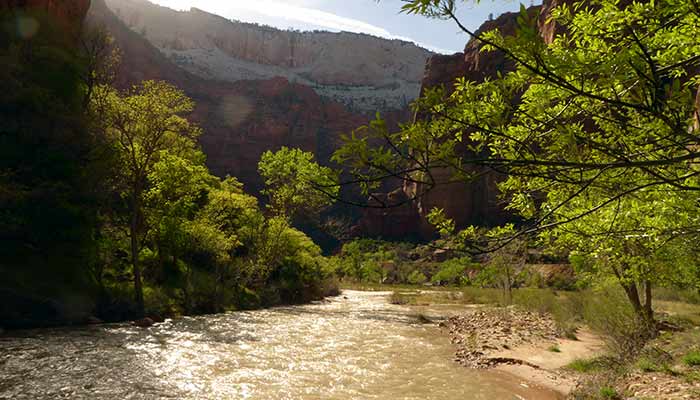 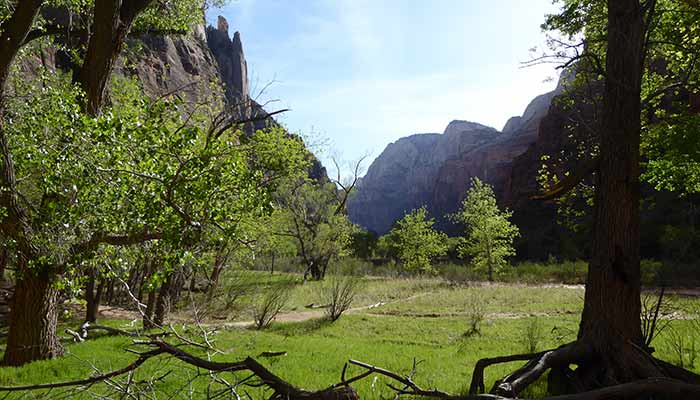 We saw many animals on this trip to Zion: turkeys, squirrels, deer (so many deer!), various birds, ducks, chipmunks, rams. We got photos of a few.
We saw this little guy while we were on a hike. He stopped a posed for a picture! 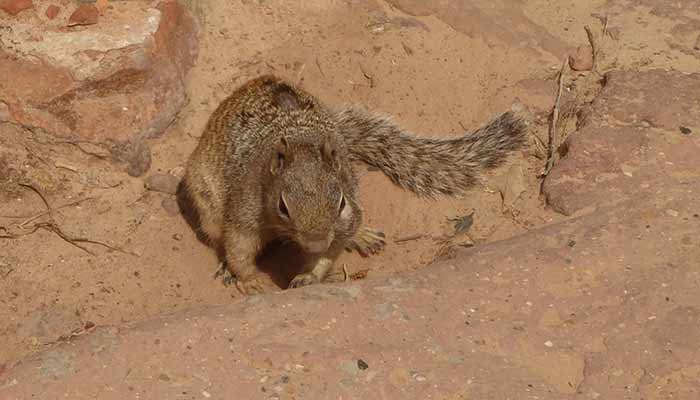 On our drive home the first night, we ran into dozens of bighorn sheep. A few posed nicely for us. 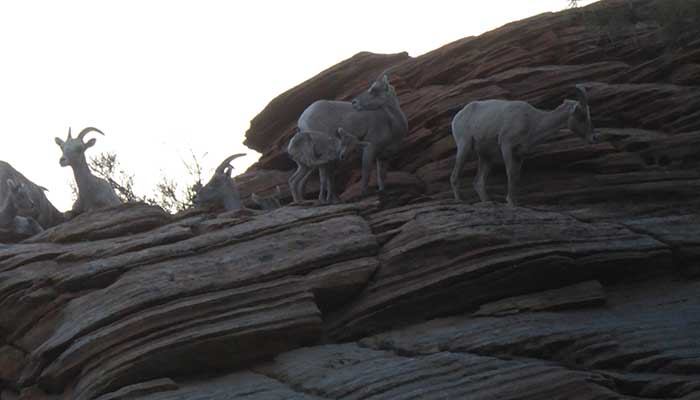 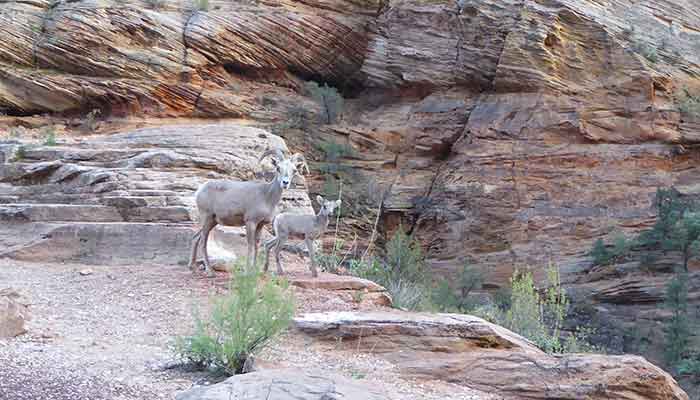 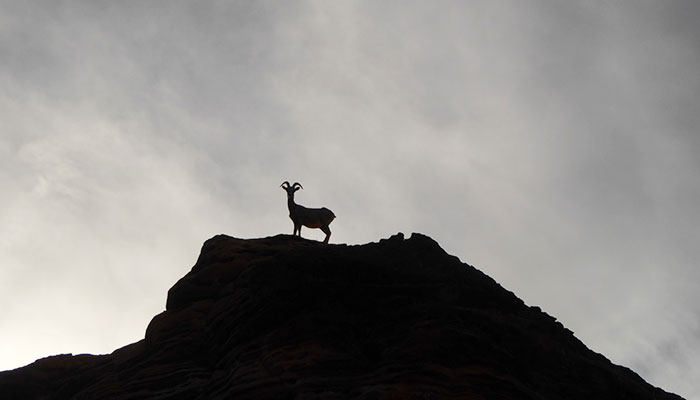 Farther down the road and outside of the park, the roadsides were thick with deer. We drove slowly and watched carefully! It was dusk and we were on the scooter, so the picutres didn't come out well. It must have been rush hour because we saw scores of them. 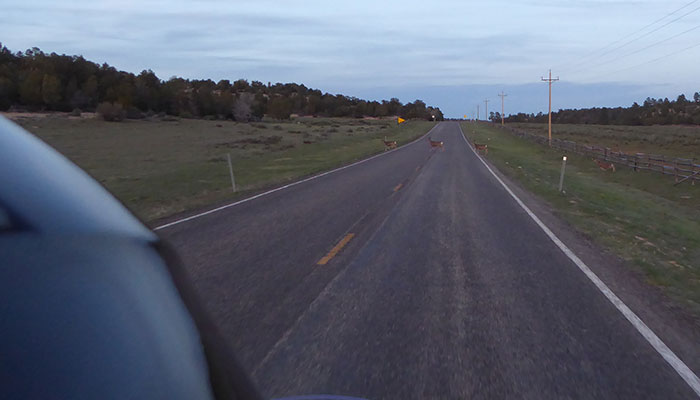 We decided to go into the park a second day (told you we love it there!) This time we had a specific purpose: we would see how far we could get on the Angel's Landing Trail. Here is a picture of the trailhead looking toward the endpoint (the top of that mountain is the Landing). 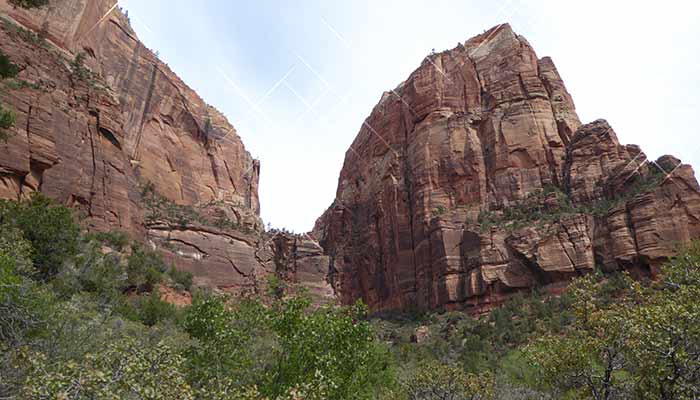 In the lower center of the picture, you might see a slot cut in the cliff wall. We estimated that it was about 500 feet up. This was Susan's goal; if she could make it that far, it would be an accomplishment. Trey wanted to make it to Scout Lookout (2 miles and 1,000 feet up) then see how he felt.

By the time we got to the picture below, we walked up a couple hundred feet in elevation. You can see the slot (Susan's goal) in the upper right portion of the picture. The slot doesn't look that far away, but it is large enough for multiple people to pass through. We still had a way to go. 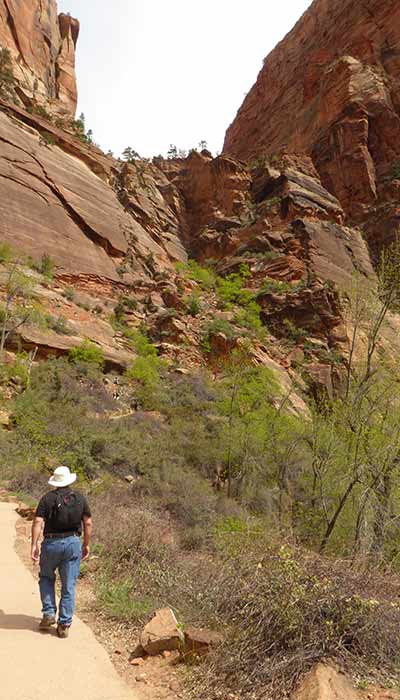 This is a shot from just before the slot. We took the above picture from the path on the far left side of this picture. 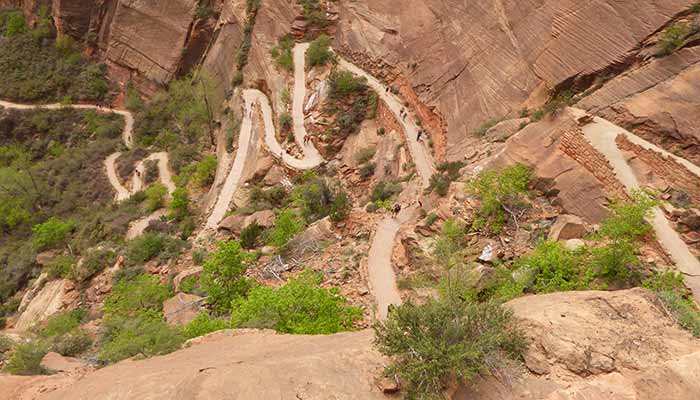 We made it to the slot! Here is a picture taken from the slot down to the valley below. You can see the trail meandering down to the river below. At this point we are about 500 feet up (our estimation.) 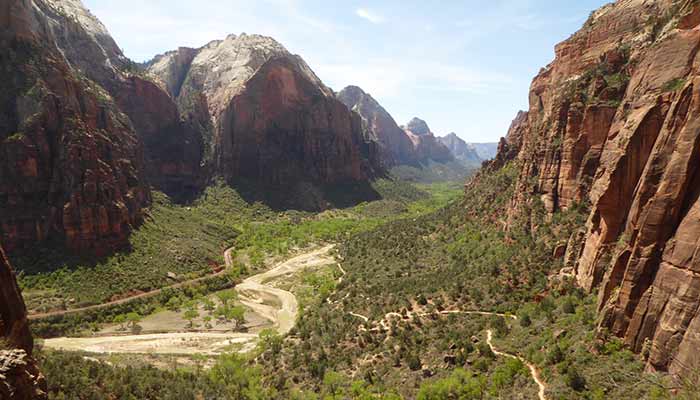 Feeling very tired and out of breath, we both decided to keep going. The trail was pretty even for another 200 yards as it traveled between two canyon walls ("Refrigerator Canyon"), then the really tough part came. We went up another series of switchbacks before we came to Walter's Wiggles. Walter's Wiggles is a set of 21 switchbacks that take you up the side of a cliff that would otherwise be impassible. They were tight and steep and it was difficult to get a picture of them. Here is one from below and one from above. You can only see part of them in these pictures. 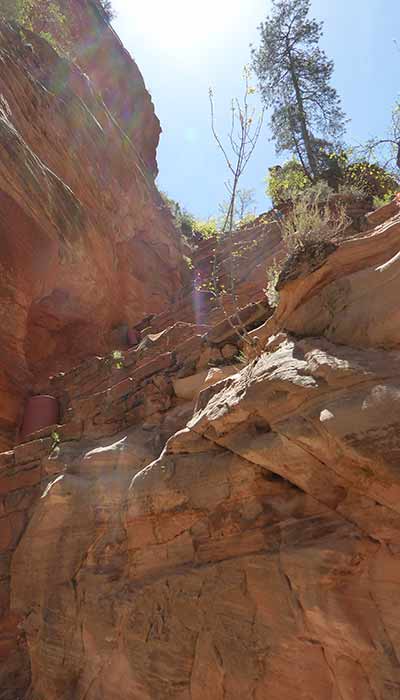 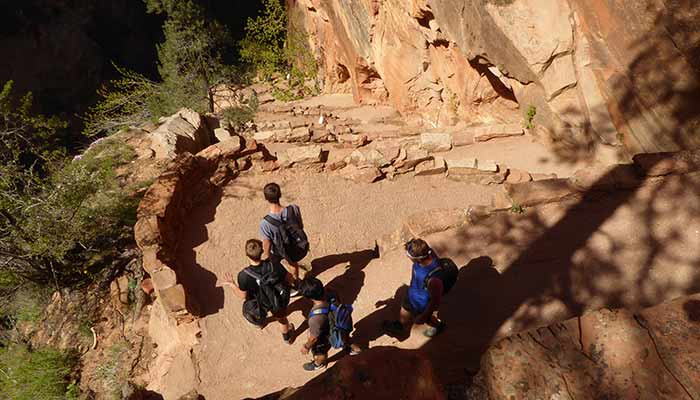 We did it! We both make it to Scout Lookout (2.2 miles and 1,000 feet in elevation) a little out of breath, but no pain. We took a break and ate a snack (boiled egg, summer sausage, and cheese) under the shade of a tree.
After a few minutes, Trey decided that he would like to hike the rest of the way. Susan looked at the trail ahead, the valley below, evaluated her energy level, and decided "Not today!". We repacked the backpack to give Trey enough water without extra weight and off he went. After he got out of site, Susan decided to see what the first part of the trip up Angel's Landing was like. A short trip up the chains confirmed that she made the correct choice. Back under the shade of the tree, she read and waited for Trey to return.

Trey took a few pictures of his experience to show what it was like. The trail from Scout Lookout to Angels Landing is called "The Chains." This is because there is a chain rail to hold to help you on your way. It is greatly needed!

Leaving Scout Landing, the beginning of the trail looked like this. 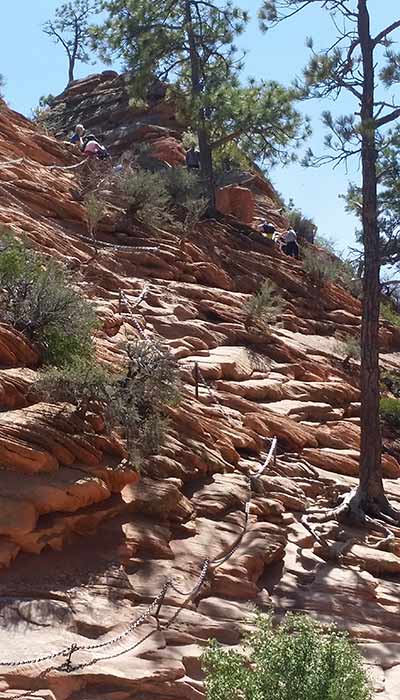 It pretty much looked like this until the last half when you walked up the spine to the landing. 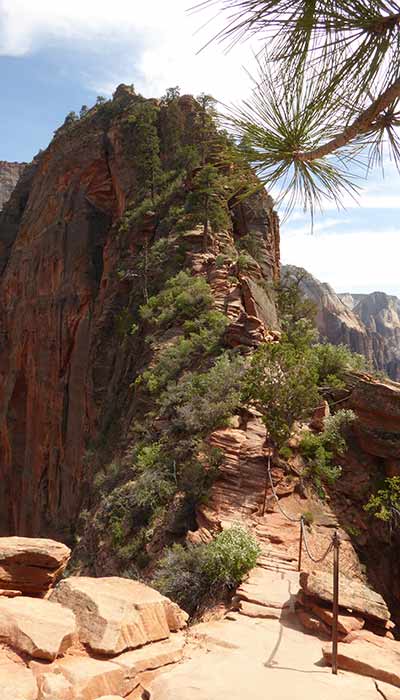 Don't look down if you have trouble with heights. 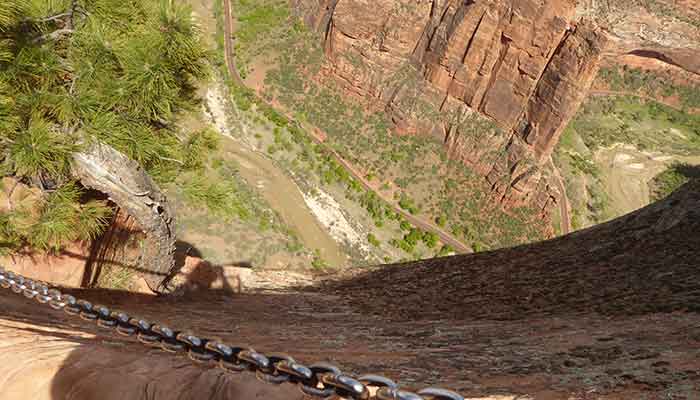 Trey made it all the way to the top! Over 2.5 miles and 1,500 feet in elevation! The view from there was spectacular! 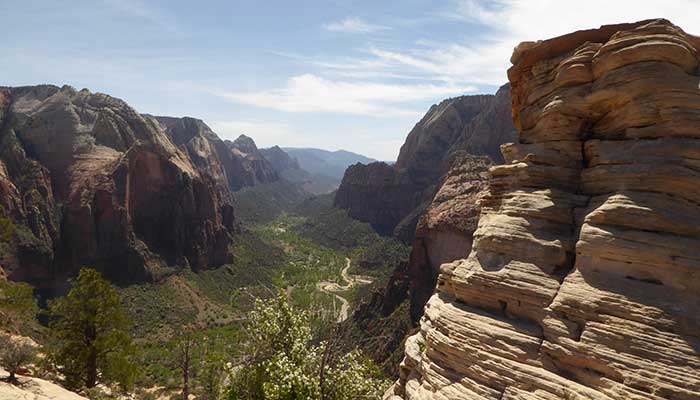 About 90 minutes after his departure, Susan (with great relief) saw him return down the rocks. Tired, but greatly satisfied with his accomplishment, he sat and rested at Scout Landing.

The rest of trip down the mountain was a bit painful for Trey's knees. He walked backward part of the way to relieve some of the stress, letting Susan guide him so he didn't fall off any cliffs. We made it to the bottom, tired, sore, and a little thirsty.

We might feel some soreness and pain tomorrow after our adventure today, but it will be worth it! What a day!

Sing praises to the LORD, who dwells in Zion!
Declare His deeds among the people.
Psalm 9.11