From Washington DC, we made our way to a small town just east of Knoxville, KY. Earlier this year, Trey met a very kind man who rides and works on Piaggio MP3s. He was going to teach Trey how to do annual service and minor repairs to our scooter.

As we were getting set up in our campsite that evening, the slide broke again. It had been almost a year since our last slide failure, so it was a bit disheartening. Trey crawled under and began to work. After the last fix, Trey bought a new bolt that was supposed to be stronger, so we were hopeful that we could get more than a year after this repair. When it came time to put the bolt in, it was nowhere to be found. He distinctly  remembered putting it in his jeans pocket, but a quick search (actually, three searches) revealed nothing. We looked for where he might have put it down, but could not find it anywhere. He figured it must have fallen in to the belly of the RV, so he contorted his body to reach is arm down into the depths below the basement.

The access slot is quite small. It is about 12" wide, 6" deep, and 3" tall. He has to squeeze his arm in. When the RV was built, screws holding down the sub-floor protruded through to the top of the slot - making that 3" height even smaller. After his first attempt to fix the slide over a year ago he cut off most of the screw tips, but did not have time to get them all. He also didn't have time to make them flush with the slot ceiling, so a little bits of metal protruded where the screws tips had been. Each time he had to fix the slide, he added a few scratches to his arm. Nothing deep or harmful - just annoying. Susan has asked if she could help since her arm is smaller, but Trey didn't think she would have the hand strength to finish the job. He was on his own.

His search for the screw took him to another part of the slot where the screws were not cut off. Forgetting where he was, he reached deep to the bottom of the belly then realized he couldn't get his arm out. One of the uncut screws dug into his forearm, preventing any movement. Think Chinese finger trap. The screw that he was caught on was pointing away from him. Not feeling any pain and not realizing that he was caught on the screw he tried to pull his arm out with a little yank. You guessed it  - skin rip. Then he learned the increasing depth of his stupidity (Trey wrote this part so don't get upset with Susan). What was probably just a tetanus shot now became stitches. Mostly what Trey could think about was how much he wanted to share this with his lifelong friend Steve, with whom he has shared many mutual predicaments. Steve, while one of the most caring and thoughtful people in the world would greatly appreciate the humor of Trey being caught like a rat in this big trap masquerading as an RV.

A photo of the open tear is at the bottom of this page.

It could have been worse, but it was bad enough for a trip to the local clinic. After a 2 hour wait we learned they didn't do stitches (sigh), so we drove an hour into Knoxville to a clinic there. Fortunately, he had no pain. After a tetanus shot, antibiotic prescription, and 5 stitches they sent him home. 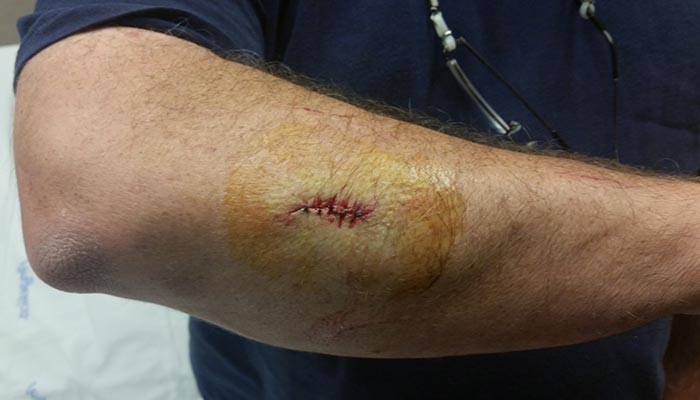 Icing on the cake - So, where was the missing bolt? You know that small pocket inside the front pocket on most jeans? The watch pocket? Need we say more! Ever since that day, whenever we think we've exhausted all our options on anything, we ask each other, "Did you check the watch pocket?" To add a little more salt in the wound, Trey used to carry a pocketwatch when he was younger, so it's not like he didn't know it was there. (That is something a good friend like Steve would have brought back to his memory)

The next morning, he went to his friend's house to work on the scooter. He said the stitches weren't bothering him, but we covered them to protect the wound from any dirt and grease he might encounter. His friend showed him how to do most annual maintenance items, gave him options for making difficult tasks easier, and gave him contact information to get better parts than what a regular shop would use. He even offered his shop for our use whenever we were in the area. Trey compensated him for his time (which he reluctantly accepted) and thanked him profusely. We meet so many nice folks as we travel: it is indeed a privilege to make new friends like this.

While Trey was out getting repair lessons, Susan began to tackle that flesh-eating slide slot. Armed with a few hours, a Dremel, and an assortment of small tools, she was able to get all the remaining screws cut off (especially the one had a small patch of skin on it) and filed the rest almost flush with the ceiling of the hole. A little cotton padding and generous amounts of Gorilla tape lined the slot to ensured that there would be no more scratches if future slide repairs were needed. The slot is currently covered up by flashing, but you can get an idea of the size here. 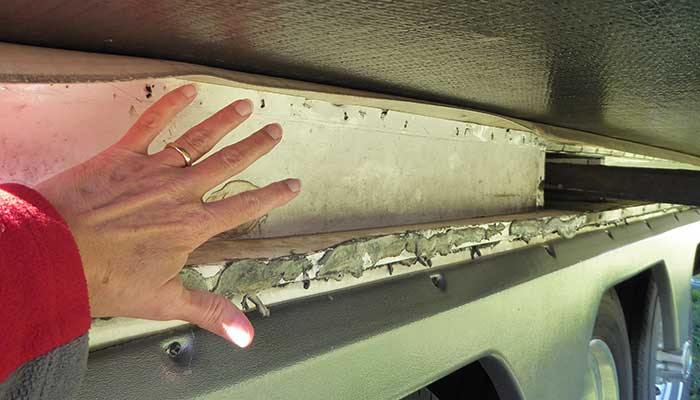 When Trey returned from scooter repairs he quickly finished the slide repair and we relaxed the rest of the evening.

The next day we dove to Hardinsburg, Kentucky to fix a very minor issue on our hitch. 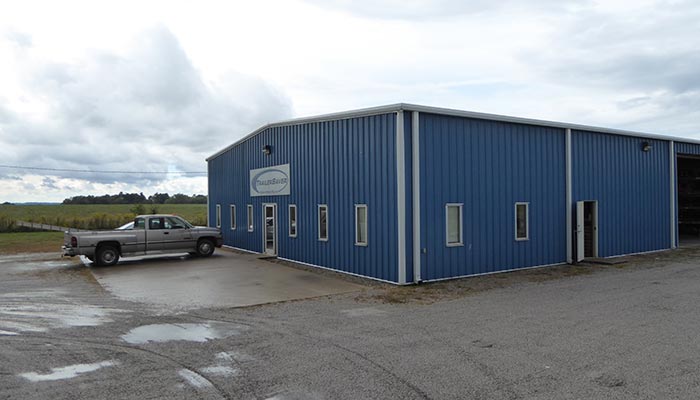 It wasn't that far out of the way, and it was something we couldn't do on our own. Besides, it is always best when the original designer does the repair. They removed the hitch head and we got a good look at how it all works. 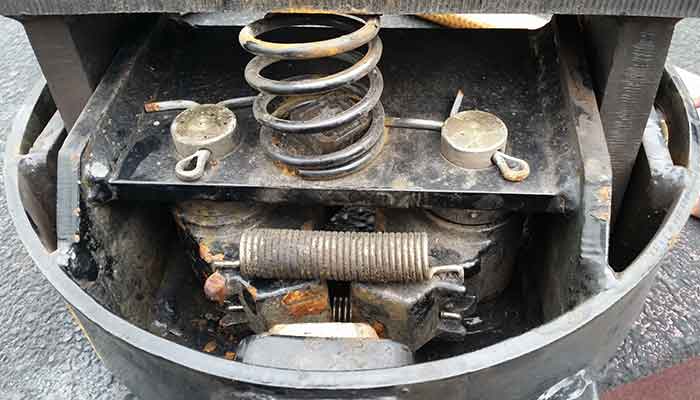 The owner and designer Dave gave us (Susan) a quick demonstration of how the hitch guts operate, replaced the spring, put the hitch back together. It was good to see Dave again and hear about his plans for retirement early next year, which means we no longer will be able to get the master hitch guy to fix our hitch.

After that we headed toward Kansas to the Heavy Duty Truck Rally.

Don't scroll further unless you really want to see this.

Okay, so it is not too bad, but still gross when you can see subcutaneous tissue blow the skin. 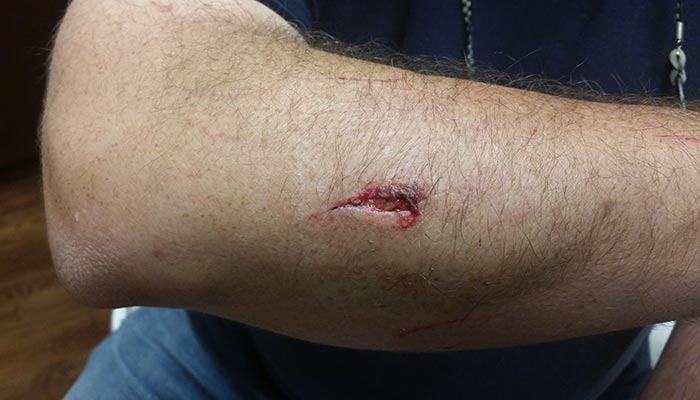