Our plan was to leave Boston early in the morning so that we could drive in the cool of the day to our next destination: York, PA. It is an 8 hour drive for the average driver. We were avoiding tolls (tolls are expensive with five axles!) and having to drive our rig just north of the most populated area of our country. We figured we would do good to keep our day under ten hours. In addition, our truck air conditioner went out somewhere in Maine, and we were in a heatwave in New England. Driving west for ten hours in the August heat without AC just didn't sound like fun.

When five tent campers with about 458 kids surrounded us the night before we were supposed to leave, we knew our early departure plan must change. Our truck is quite loud and tent walls are rather thin. In the morning, we waited until the tenters began to stir, then we cranked the engine. It was only about an hour after our planned departure. The drive was pretty uneventful and we didn't feel as hot as we thought we would. We were definitely glistening by the end of the day, but we weren't melting like we expected.

We arrived in York, PA and quickly made an appointment to get the AC serviced the next morning. A new compressor and a few more replaced parts made us cool once more (If we point out the play on words here, does that negate any possible coolness we might have?).

Our second day was spent visiting the scale repair shop outside of Baltimore, MD. We had a scale needle go wild at the RV rally in Springfield, MA and we needed to get it fixed before our next rally. Since we planned to be an hour from the only US Scale distribution headquarters, it seemed silly to mail the scale to Florida and wait for one to be mailed back to us. We could just take the scale in ourselves. It was a pleasant drive, but we did have to quickly alter course because of a low clearance bridge. While the new owner was fixing our scale, the old owner gave us a personalized tour of the place and let us see the guts of the scales we use. It is truly a fascinating piece of machinery. We didn't even think to ask about taking pictures while the scale anatomy was exposed. It is comprised of tubes and oils and springs and coils. Simple in design, but extremely precise and durable in build.

After the scale was fixed, we traded the truck for the scooter and rode to the Harley Davidson Manufacturing Plant in town. Did we tell you that York County is the Factory Tour Capital of the US? 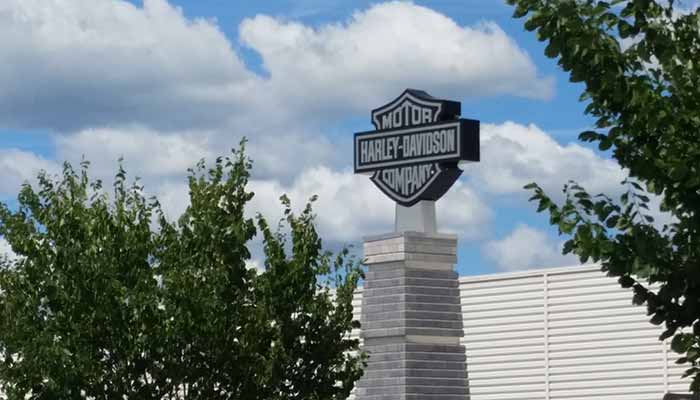 While not everyone on the tour had a bike, everyone who had a bike had a Harley... except us. Here is our little scooter playing with the big boys! This was the smallest of three motorcycle parking areas we saw. 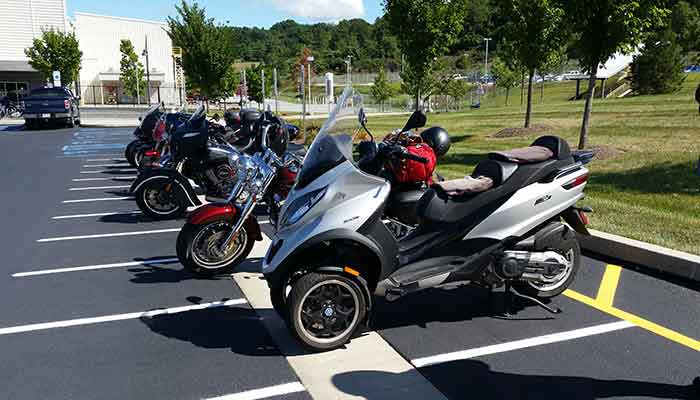 The tour was fascinating! So much of what they do is automated. Each bike rides through the factory on a motorized cart. At the beginning of the line, they insert the build sheet and mount a frame to the cart. The cart then automatically goes from station to station where workers add what is required for that order. It ends up at the testing booth where every engine is started and speed tested. We can't remember how long it takes a bike to proceed from start to finish, but the goal of the factory is to produce over 600 bikes each day.

Photos weren't allowed in the plant, but we did note the shiny chrome accessories in the restrooms. Seemed appropriate such a place! 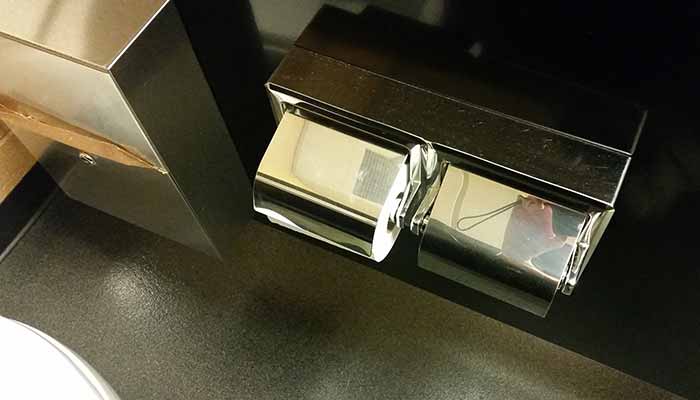 The next two days we spent exploring Gettysburg. We knew from school that Gettysburg was "the turning point of the Civil War" but didn't remember much beyond that. During our two day excursion, we learned much about what happened there. Our goal is not to repeat that history here, but give you a couple of highlights from our weekend.

Gettysburg National Military Park has a nice visitor Center and Museum, but most of the park is about the battlefield which surrounds the actual town. The red line you see on this map is a self-driving tour where you can see most of the major points of interest. 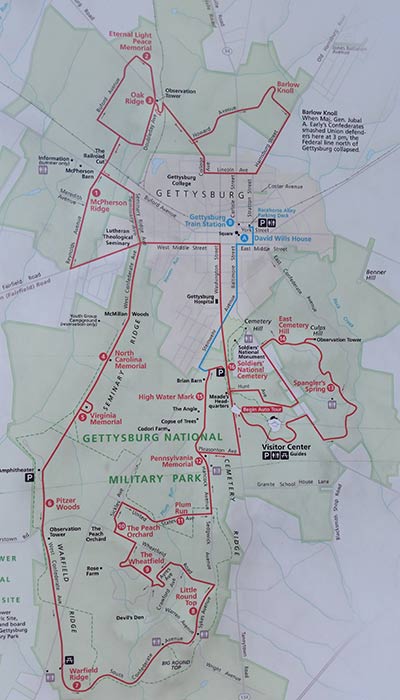 They said to allow a couple of hours for the self-guided driving tour: it took us an entire day! On this drive, locations we had barely heard about became a reality. Before the driving tour, we watched a Walk Through presentation of the 3-day campaign. The Ranger did a great job keeping a very large audience quite captive as he showed troop movements using buckets, plates, and rope. 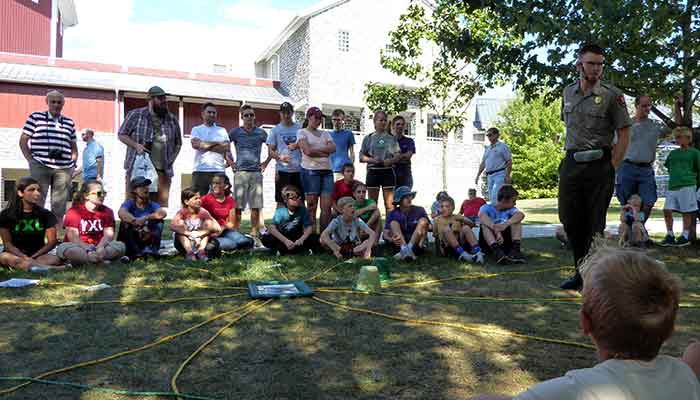 If we had to sum up what the military park was, it was pretty much battlegrounds... 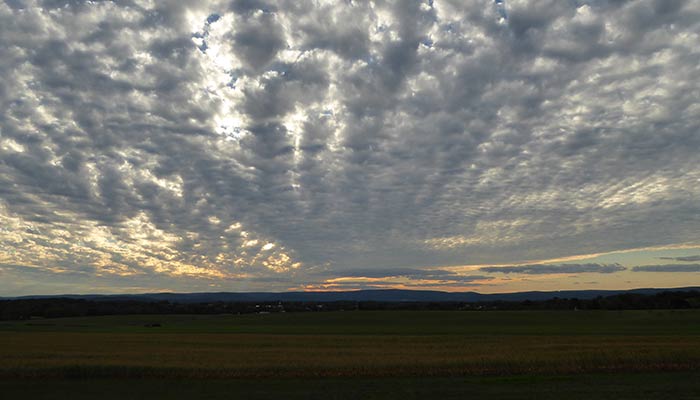 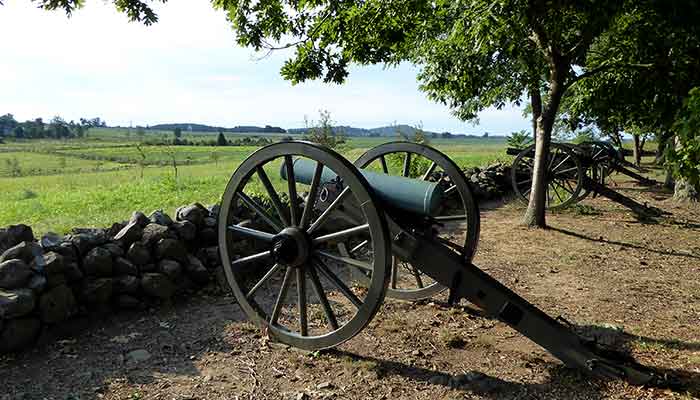 ...monuments (seriously, hundreds of monuments of all kinds are everywhere!)... 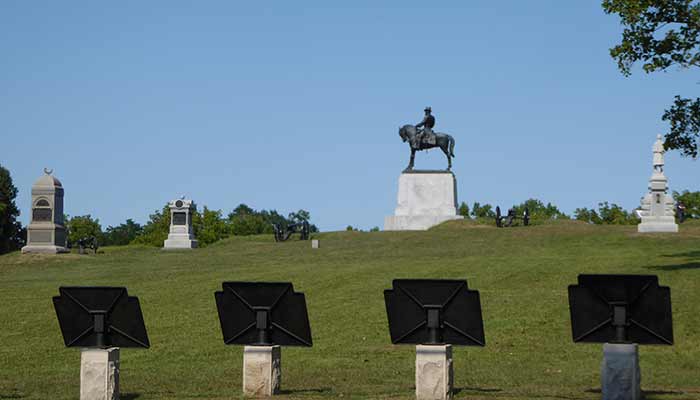 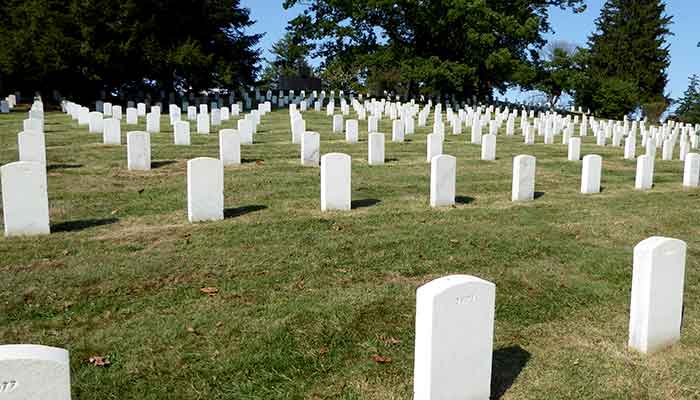 Don't get us wrong, there is much more to the Park than that, but if you are not interested in the causes and the people involved, that is all you will get out of it.

Fortunately, we were interested in the causes and people. We chose to go on a day where there were Civil War Demonstrations happening. The first we saw was a Confederate troop showing how guns were used in the line of battle. They showed us how the guns were loaded and fired and did some marching formations demonstrating different tactical methods used by military leaders. Remember most of the Civil War leaders, Confederate and Union, went to the same military school and many were classmates! 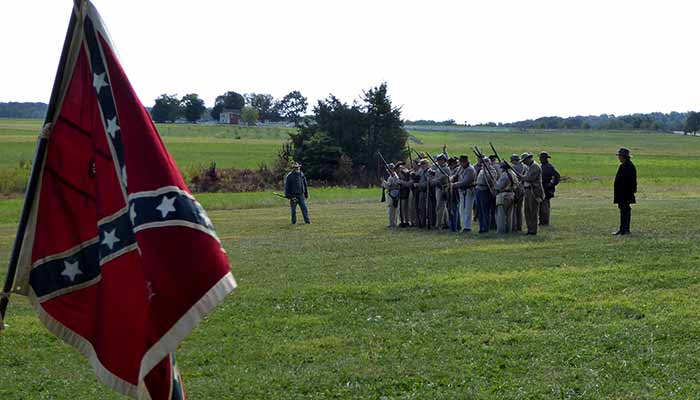 After the demonstration, we were allowed to walk through their camp behind the trees. They invited all in to take a closer look and ask any questions they may have. 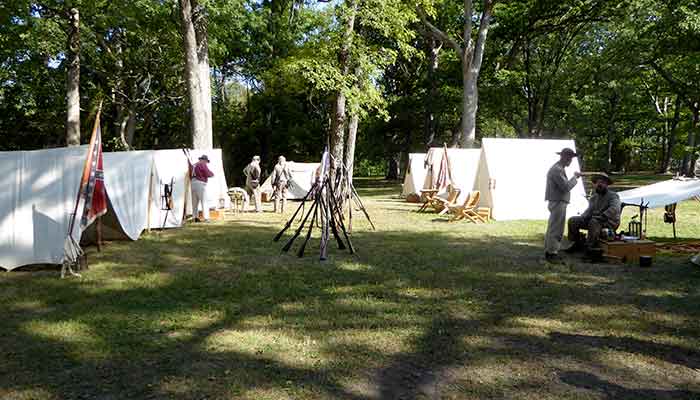 We couldn't stay and talk with anyone because the Union Cannon demonstration was about to begin across the park. Using only half the gunpowder used in battle, the volunteers loaded blanks and fired the cannon. Yes, it was quite loud! 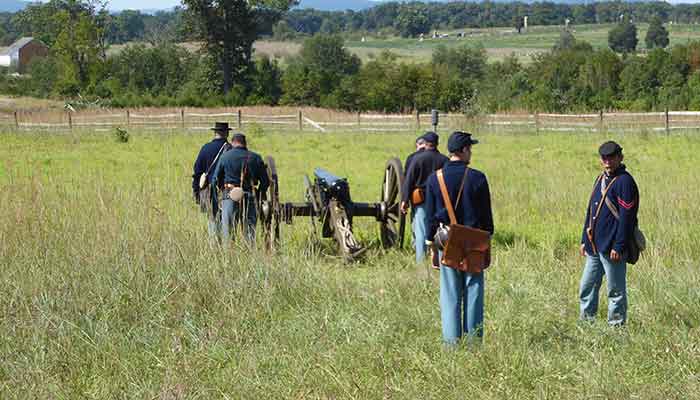 We learned a few things while here. Some of the cannons used in the Civil War were rifled and quite accurate for their day. Their range was pretty extensive and they could inflict much damage. They had different ammunition for different scenarios. Non-rifled cannons used simple balls and were the crudest of the cannons. The rifled cannons used bullet shaped ammunition that would explode at certain intervals. When the enemy was very close, like firing at a line of soldiers, they would load canisters which looked like giant shotgun shells and contained many small metal balls to inflict as much human carnage as possible.

While technological military advances can make peaceful nations safer from a hostile enemy, it is chilling to realize that we are creating weapons that are better and better at killing other humans.

Although neither of us had relatives in Texas during the Civil War, we were interested to see where Texas boys fought in Gettysburg. This monument is placed near where they camped before going into battle. 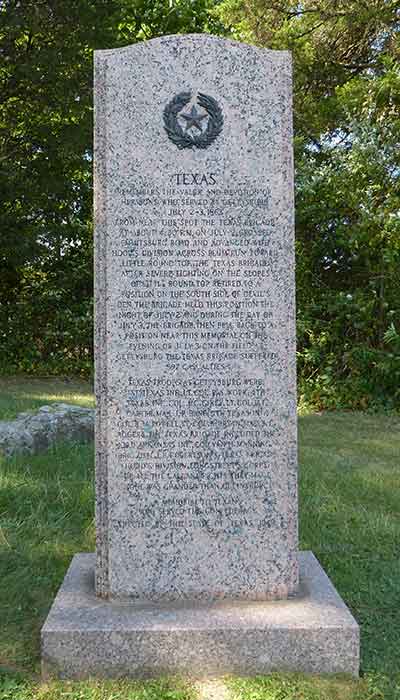 This plaque was placed near the battle where the Texans fought. 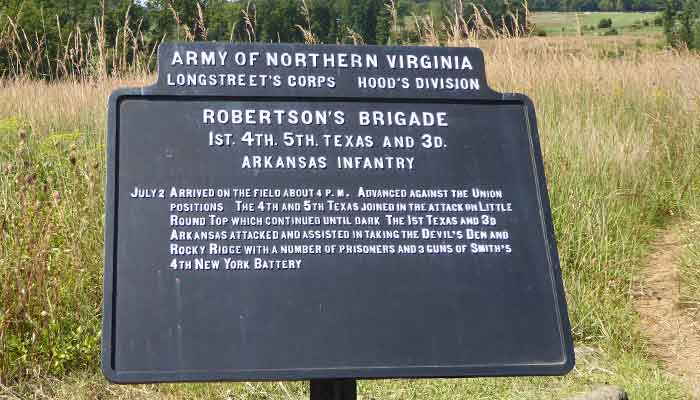 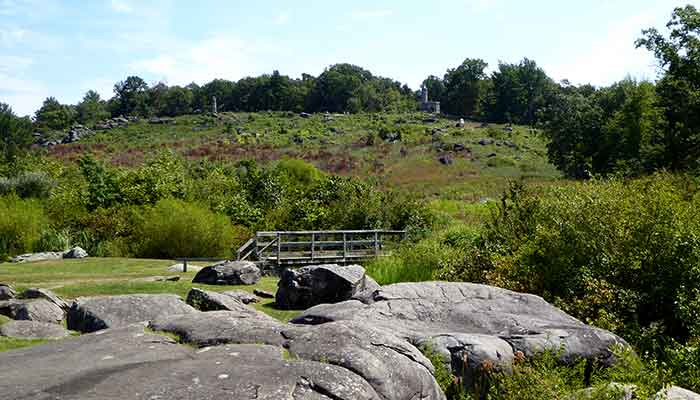 And here is Devil's Den From Little Round Top. Devil's Den is the rocky hill in the upper center of the picture. The area around Devil's Den was known as the Slaughter Pen because of the number of men who died there. 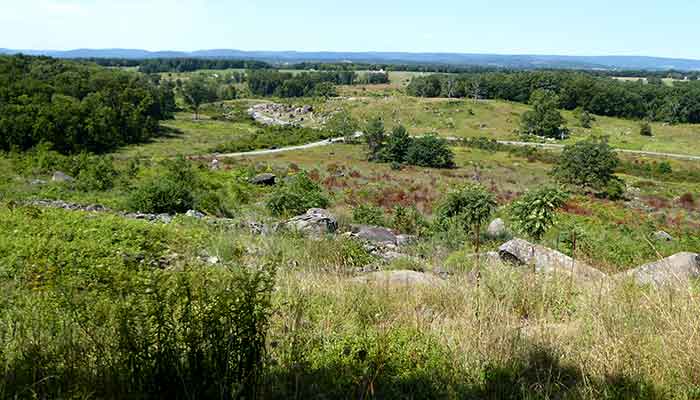 The wall the Texas Brigade hid behind before taking Devil's Den from Union troops is still there. 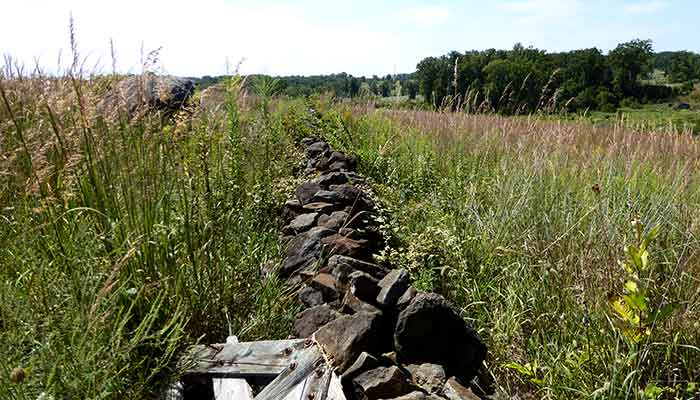 It was a good two days exploring the park and we learned a great deal. One main fact was confirmed in both our minds. While we both dislike war in general, we particular abhor the Civil War. Seeing the fields that were covered in American blood brought this point home even more. Brothers fighting against each other, neighbor hating neighbor, each side moving further and further away from reconciliation as time passed. And caught in the middle? The slaves who were the seeming focus of that impasse and who were largely left out of the solution afterward by both sides.

What a difficult and bitter time for our nation - divided against itself. It is a lesson we'd like to forget, but we must ponder these things so that we may strive to walk in wisdom today.

We are thankful that the God of Peace knows our hearts and has a better way.

Who is wise and understanding among you?
Let him show by good conduct that his works are done in the meekness of wisdom.
But if you have bitter envy and self-seeking in your hearts,
do not boast and lie against the truth.
his wisdom does not descend from above, but is earthly, sensual, demonic.
For where envy and self-seeking exist, confusion and every evil thing are there.
But the wisdom that is from above is first pure, then peaceable, gentle, willing to yield, full of mercy and good fruits, without partiality and without hypocrisy.
Now the fruit of righteousness is sown in peace by those who make peace.